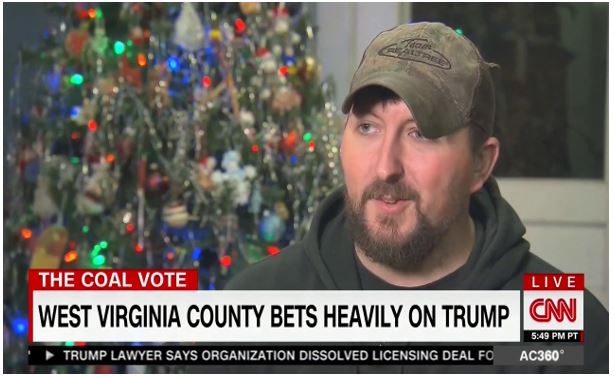 WE OWE YOU A THUMPING BARRY. WE’RE VOTING FOR TRUMP – AND THEY DID

The Democrats may never win West Virginia again—and don’t deserve to, that’s for sure.

Not that The Man in Tan Gang cares, but all that senseless destruction of industries, jobs, and assets just to enrich a few Gang members left a very bad taste in the mouths of the formerly hard-core Democrats in coal country.


Trump was swept into power by miners in 2016. Their dilapidated houses with peeling paint and rusty vehicles in the yard have given way to perked up dwellings and new American-made trucks in paved driveways.  Good job, Mr. President.

HOW DID THE MAN IN TAN FARE OUT OF THIS YOU MAY ASK?

Tan Man did very, very well. In fact, public records show the Obamas claiming a joint net worth of $1.3 million when they took office in 2008.  But their situation has improved since then – dramatically.

On his $400,000 salary per year as President for 8 years—these gang leaders might have more or less doubled their net worth after taxes to a max of about $2.6 million tops if they did not spend too much on tan suits.

Somehow, they magically jumped to an announced net worth of over $40 million earlier this year. It was then reported to be $70 million (and just recently their wealth was announced on cable news to be over $200 million, but I can’t get independent verification outside of fake news outlets).

So how did they ‘earn’ these extreme millions?

A very good question which has no answer at this point, though politicking-for-profit comes to mind as a possibility.

Maybe through kick-backs from the billions they made for their buddies in the Smash and Grab Global Warming Hoax scam could also be a source?

What is fact, is that this money wasn’t made by selling anything they owned, except perhaps, power.


They’ve kept their old home in Chicago even after buying this beauty pictured below in Washington, DC (notice the protective walls the Democrats deny us) for $8.1 million.

Now they’ve bought another mansion in Dubai.  Yes, Dubai, the water-bound, Muslim
country in the middle of the Persian Gulf. That’s the one!

But hang on, we’re not done yet.

They’ve bought another multi-million-dollar mansion in Rancho Mirage on the Left Coast (California), “a community known for its world-class golf courses,” and we were advised today, another property was purchased on the California coast (not yet verified). So unlike MSM, we won’t state it as fact.

Not to leave out his alleged birthplace of Hawaii. Obama took over a property bought with insider gains by his best friend, Marty Nesbitt, who was referred to as the “First Friend” while Obama was in The White House.

Marty Nesbitt was made filthy stinking rich buying up companies through Vistria, which he set up to benefit from the Smash & Grab Global Warming Hoax scam.

Though the buyer of this incredible—BEACHFRONT—property was Marty, it has now somehow become one of the Obama’s homes.  Odd. Or is it really?

But here’s the one that gets me.  In fact, it really, really makes me angry when I think of all those coal miners, many of whom ended up with ruined lives, broken marriages, kids on drugs—and even worse—a sense of abject hopelessness thanks to this prick and his billionaire pals destroying the fossil fuels industry for personal profit.

Last week the Obamas bought another beachfront—that’s right—BEACHFRONT—property in Martha’s Vineyard, for $15.3 million.

Despite the Man in Tan Gang’s stark warnings, the ocean levels didn’t budge a millimetre.

In fact, during his tenure as Criminal-in-Chief, 90% of the world’s atolls gained ground rather than going under—but they all knew that while jetting to their Global Warming Conventions. Yes, they knew precisely what they were doing.

So, let’s review Barry’s four new properties and see if we can prove my hypothesis that the hoax was about making billions from the get-go.

The Man in Tan’s muzzie-wuzzie property on the sand islands of Dubai is in the middle of the Persian Gulf—that’s sea level by the way.  Odd place for the King of Global Warming to buy a mansion, don’t you think?

Then we have his house garnered from ‘First Friend’, Marty Nesbitt on Hawaii’s sunny beaches—also near sea level.

The Washington, DC property was built in the SWAMP—a non-aqueous water property, which is ‘under’ water by $22 trillion—but Barry doesn’t care. It’s his Swamp-front property and the debt he stacked up for my children and grandchildren to pay is not his worry, Mate.

However, this latest acquisition of a $15.3 million BEACHFRONT mansion on Martha’s Vineyard—a playground for the ultra-rich, almost exclusively white—is the one I’m steamed about.

ARE THEY STANDING IN THE OCEAN IN FRONT OF THEIR MARTHA’S VINEYARD MANSION, OR IS THIS A TRICK SHOT? (PHOTO COURTESY OF NEW YORK POST)

You are a fraud, Barrack Hussein Obama, and likely an outright criminal.

Your actions have now spoken far louder than any of the trash talk used by you and your chum-scums to destroy tens of thousands of lives and billions of dollars in value—by lying and promoting an absolute HOAX.

You even had the National Oceanic and Atmospheric Agency fake data to support the warming hoax by leaving off historically low temperatures!

A fraud is the nicest thing I can call you, Barry!

But while you’re on a binge buying up beachfront properties, your Democrat Party is still running on “global warming” and “rising oceans” falsely claiming they will subsume ‘all coastal cities’ in just a few years. Did you know that, Barry?

Here’s your Commie spawn AOC, talking all about it while making macaroni last night.

So, if any still believe the Leftist Global Warming Hoax is anything but a ploy to put the world under its thumb—and get rich in the process—I submit my Man in Tan Gang Theory:

If the head of the Man in Tan Clan is spending his new found millions on beachfront properties, you can bet your sweet backside that the oceans are not rising.

Some comrade had better wade into the La-La Land stupid pool and tell the Hollywood crowd and that pathetic little girl in the YouTube clip that it was all a hoax – before they drown in their own fairy dust.