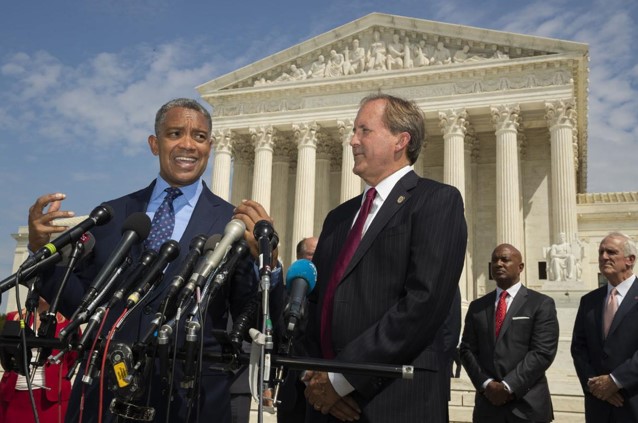 The Attorneys General of 50 States and Territories file antitrust action against Google and its parent company, Alphabet, to bypass feckless Feds

The European Union hit GOOGLE with fines of over $8 billion in the last two years.

Like Jabba the Hut being slapped by his pet Antifa dancer, the company just gave a grunt.  There was no noticeable change in corporate value and certainly no change in its admitted misconduct. Same ole stuff, different day.

And the hapless Department of Justice which refuses to do anything even about a presidential coup by the CIA, FBI, NSA and other rogues, would do the same as the EU—they’d just go for the bucks to pad their own coffers and leave the criminals doing what they do, over and over.

I live in Europe and reluctantly use Google every day, so I know simple fines did no good against this behemoth. Only carving off body parts will.

As example of what they’re doing, go to Google and partially type in the hottest conservative name in America, James O’Kee[fe]. He’s the guy who got Google insiders on tape and released a trove of internal docs proving intentional manipulation of elections in favour of Democrats in 2016 and 2018—after those same company execs testified under oath to Congress that they had not.

James was invited to the White House and honoured by President Trump He’s known to, and by, every Conservative in America—yet he’s invisible to Google. Just watch as the autofill prompt switches his name to a cardiologist, an O’Connor and six Kennedys. James O’Keefe hardly exists in Google World, by intent.  They don’t want anyone to know about him. This is Search Engine Manipulation Effect. During the time it takes to find James, you’re sidetracked or forgot what you were looking for—or why. That’s intentional.

Now type in one of CNN’s lowest rated Leftist chinwags, Rachel Madd[ow].  The results are all in her name, and they’re positives—even repeated. Rachel Maddow show, YouTube, podcast, ratings (well maybe this one isn’t so positive), twitter, salary, partner, blog and a repeat “show” with YouTube added.

Biased? You bet. So how is this case filed by 50 State and Territory Attorneys General going to be any different than a federal case?

First of all, it’s 50 separate governments, rather than one that has proven itself to be so easily manipulated. For example – six Google officials headed departments for Obama and protected the company from any investigation or harm.

Graft and corruption work. Just ask Hillary Clinton, James Comey, John Brennan, James Clapper and a dozen other members of the coup who are still walking the streets unindicted, years after their crimes were committed.

But it is now clear that if The Google Gang manipulate the election results next year— as they were allowed to do in 2016 and 201— a Democrat will be elected to the White House—no matter how crazy that candidate proves to be—and any federal investigation will disappear faster than tax dollars on K Street.  A State case, on the other hand, will not.  It will keep on going no matter who’s in the Oval Office.

Keeping an important case like this out of Washington, D.C. was very, very clever.  But to keep Editor Harry happy, I now have to back up what I just wrote about election tampering in 2016 and 2018, don’t I?

Dr. Robert Epstein—a self-described ‘left of left-centre’ Democrat—has proven that Google’s manipulated algorithms in the 2016 presidential election drove a minimum of 2.6 million votes to Hillary Clinton.  Dr. Epstein further admitted that the number might have been much higher.

Under America’s Electoral College system where each State chooses its president, this is a huge deal.  As example, President Trump won the State of Michigan by only 13,107 votes. If Hillary had paid even one visit near the end of her campaign, Google could have easily put her over the top through the Search Engine Manipulation Effect as potential voters did searches. Fortunately, she so despised ‘deplorable’ that she stayed with her own ilk and element in New York and California, losing to Trump.

When asked by Sen. Ted Cruz in his testimony why an admitted left-of-left Hillary voter was bringing forth all of this evidence, Dr. Epstein admirably stated, “I value my country and democracy more that I value any party or candidate. That is why I’m speaking out today.”

This man is a Harvard PhD with the American Institute for Behavioural Research and Technology and has 40 years’ experience in his field.

But if that’s not enough for Editor Harry and the doubters, then you can watch Google Executives admit on film that they intentionally did this as a matter of company policy. James O’Keefe’s investigative group (Project Veritas) filmed them saying so. [In full disclosure, I am financially involved with Project Veritas and James as a supporter]

If that’s not enough for doubtful readers (or Editor Harry), watch this one. If you’re in a hurry, forward to 13:10 where Executive “Head of Responsible Innovation,” Gen Gennai, tells Project Veritas exactly how Google did it—and that they are going to do it again!

OK, so they admit doing it, but Trump won. So, where’s the big deal?

All right, I’ll give you that one—but according to former Secret Service agent, Dan Bongino (who served in Obama’s White House) Google was so sure of their 2016 candidate, Hillary Clinton, winning that they were not aggressive at all.  Google itself predicted that Hillary would win by 92% and as the single largest donor to her campaign, they were cocksure they were going to get what they paid for—both before and after the election.

But what about the 2018 midterm elections?

Different story altogether. 2016 woke Google up and they went full bore in the 2018 midterms. Dr. Epstein’s research has proven that by using ‘SEME’ (Search Engine Manipulation Effect) programmed into Google’s search engine algorithms, “there can be up to an 80% shift as people blindly trust higher ranked search results.” Dr. Epstein added that “these manipulations are invisible and non-competitive,” but “may have shifted 78.2 million results in 2018 across many U.S. races.”

80% of 78.2 million is 62.56 million likely voters, which is massive, even when spread out among Dem voters and candidates in all 50 states.  Is it any wonder the Democrats won the House of Representatives in 2018?  No, it is not.  Google handed them a minimum of 25 seats—and the majority.

But what about the big one in 2020 that will decide the fate of America?

“That these companies all support the same candidate, they will have the power to shift 15 million voters to that candidate.” Dr. Robert Epstein

Dr. Epstein went on to say, “To let Big Tech get away with subliminal manipulation on this scale would be to make the free and fair election meaningless.”

Keeping in mind that the two largest presidential margins in U.S. history were 18 million (Nixon) and 16.8 million (Reagan), a 15 million gain through  fraudulent and ‘invisible’ manipulation—tantamount to advertising by Google ,would likely be the death of America as we know it. If these 50 Attorneys General hadn’t fired the first shot, we’d have been inundated.

I say better to draw down on Google and bust ‘em up—before they destroy us and our way of life.

Must admit, dear Readers, that I did not see this one coming.

I’ve been actively writing about all of this usurpation of State powers by the Feds since September of 1977 and am disgusted by it.

For half a century the States have been asleep, allowing Washington to order them to pay for unfunded mandates passed by Congress using their own revenues, seizing control of education for brainwashing purposes— an area specifically under state management—and in general, handing over their Constitutional powers to an illegally self-empowered federal mob—without as much as a whimper.

So, it gives me great hope that the States are reasserting themselves as the true building blocks of government—and I hope you see it soon Down Under soon as well.

If you need us, we’ll be in the saloon havin’ a whiskey, waiting for the shootout.