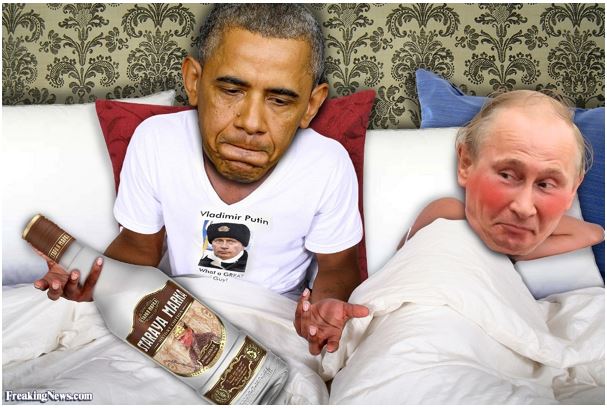 “DEMOCRATS HELPING PUTIN DESTABILIZE AMERICA” was the headline in The New York Post.

I couldn’t believe my eyes!  A mainstream newspaper was actually telling the truth for a change.

When Obama whispered on a still ‘open’ microphone to Medvedev, “Tell Vladimir I can be ‘more flexible’ after the election,” he was not kidding.

Obama agreed to sell out his own country in more than one way—and he almost delivered—until he ran into a stump named Trump.

When that did not work, Obama used Russian disinformation organised by his CIA Director, John Brennan—an avowed Communist—and the DNC to try to remove President Trump from office in an attempted coup.

Normal criminals would think almost destroying a man was enough—but there is nothing ‘normal’ about the Democrat Party of America.

How do I know that Obama orchestrated the set up and coup? Because only a president can order a ‘counter-intelligence probe’, that’s how.

So, what’s the other way Obama sold out America?

I’m glad you asked, but let’s start with a question. Besides wanting a compliant Socialist to do his bidding rather than an American patriot like Donald Trump, what is the only other thing that could help Putin return Russia to being a world power?

Answer—Get Obama and his Socialist Democrats to destroy America’s energy sector. That would put Russia back in control of the market, especially with recent turmoil in the Middle East.

Prices could double or triple within weeks. Energy is 52% of Putin’s economy, so that would be a major fix. He could even start invading his neighbours again.

Thanks to Trump’s deregulation of the energy sector, America is energy independent for the first time in 75 years.

The U.S. is now a net-exporter, producing more fossil fuels than any nation on earth and making prices their lowest in decades. This is bad for Uncle Vlad (and why he hates Trump).

Every dimwit Leftist traitor on the Democrat debate stage last week swore to support this amazingly stupid destruction of their own nation. Traitors to the he/she, they are.

And if you doubt they are REDS, here’s the leading candidate, Bernie ‘the Red’ Sanders, on June 13, 1988 drunk and naked with a table full of Commies on his honeymoon (no, you did not misread that) his honeymoon in the Communist U.S.S.R.!  You can’t make this stuff up, folks.

Question- Who in their right mind would ‘honeymoon’ in the Communist U.S.S.R. in the 1980s? Answer- Bernie ‘the Red’ Sanders and his bride!

Every single Democrat candidate on that debate stage pledged to put their own nation asunder by once more subjecting it and the world to Middle East and Russian energy for no other discernible purpose than to help their ideological homeland—Russia—become a world threat once more.

Here’s what they have all promised or endorsed as part of their platform:

Many of the mental midgets running for President were alive back then too and know what they are about to do to America, but the poor millennials – they’ve been brainwashed to think history only began with Barack Hussein Obama.

They haven’t a clue, poor sheep, and they are being herded by wolves.

It took 30 years of Leftist propaganda in schools and universities to pull this off—but they did it.

What the Dems are promising is physically, economically and morally impossible.

It is a fraud on the people as it won’t happen and they know it, but it is not only moving forward without any serious scrutiny, it is actually popular in America’s largest political party and among its mindless youthful adherents.

But this is the Richardson Post, so let’s tug at a thread or two, shall we?

ELIMINATION OF THE COMBUSTION ENGINE—Obama’s former President of Vice – Sleepy Joe Biden, has promised to eliminate all combustion engines in ‘his first term’.

His plan is to confiscate 280 million cars under as yet unknown powers and replace them with as yet-to-be made practical ‘electric cars’ that don’t yet have charging stations.

Suppose America did have charging stations, just for fun, and what have you got?

A power grid incapable of sustaining such an overload charging 280 million car batteries, using—guess what?—power generated in overwhelming part through burning the fossil fuels you just eliminated. The U.S. military would call this a ‘cluster-f@#k’.

Everything in America except stress and Leftist stupidity travels by trucks using combustion engines.

Almost every food product grown in America for its own use or export requires tractors, powered by combustion engines, to produce.

So, in summary, for Sleepy Joe Biden’s absolutely stupid ‘promise’ to save Vladimir Putin, he will have to:

1) shut down the American economy

Great, Joe.  The fact that Democrat politicians never keep their promises is our only hope.

But they have no intention of doing any of this anyway. They know it’s a hoax—but it will be used to seize more power over Americans and their assets. Just watch.

END ALL FOSSIL FUEL USE IN A DECADE—Gasoline was the by-product of making kerosene for lamps and heaters by distilling crude oil.

It was considered useless and dumped in streets and gullies to evaporate until Henry Ford and others came up with a way to use it—a lot of it, in fact—in the combustion
engine.

But most products you can think of that make modern life simpler and better also come from crude oil.

Under the Democrat’s plan, America’s most abundant energy source—coal—will sit underground until it turns into diamonds.

What most people don’t know however, is that there is an enzyme product called ‘CoalStar.’

This product was invented in the United States and makes coal burn so thoroughly that there is almost no ash and its use leaves a smaller carbon footprint than natural gas.

I worked on this product and project in 2014, but Obama’s Department of Energy refused to even discuss it after the inventor’s first meeting with them.

As with all things Liberal, everything they do has an ulterior motive and purpose – environmental concern was apparently not one of them.

While trashing coal, gas, and offshore drilling by day, the Obama insiders were sucking up those same stocks like cocaine through a straw—making them all RICH.

Natural gas, which has caused America’s carbon footprint to become the lowest in the developed world, will also be gone.  Back to wood smoke or burning buffalo chips and peat I suppose. No pollution there!

Rarely in human history has such a hoax been perpetrated on a people. We are not stupid enough to believe any of this nonsense, which is why I started looking for the real reason.

Is it payback to Putin for helping them (almost) destroy Trump, or just about gaining totalitarian control? Could it be both?  I believe the answer is yes—both—and a high level of co-ordination between Putin and the Dems will continue until they return to power or are destroyed.

Putin helps the Democrats fix elections and the Democrats get Putin and the oligarchs back on their feet by economically destroying their own nation through ending its energy self-sufficiency.

Doing this will mean America once more has to import energy as the people won’t accept starvation or being put back into the Stone Age by totalitarian Democrats.

The Putin puppets in the Democrat party will have to backtrack on this. They know that already, but they will have put Vladimir Putin back on his feet and set America up for its ultimate downfall, which has been a Progressive Democrat goal for a century.

END FACTORY FARMING AND ELIMINATE COWS—This may be the first one to bite the Demidoodles in the backside as a hungry people are not a happy people.

And this killing of cows nonsense is actually counter-productive. That was proven by a real scientist, Allan Savory.

Allan has shown through 40 years of intensive testing that larger herds—so big that they mimic nature like herds of reindeer and buffalo—is the answer to desertification, not its cause, and it is the best way to keep the planet from warming—which has not happened in 15 years—but it’s important to know how to fix desertification.

Allan Savory’s work will be the basis of another article, but his absolutely fascinating TED talk proves—using billions of restored hectares that Allan Savory restored himself—that he has the answer and it’s not murdering the cows.

Increasing herds will save the planet from desertification if the Libtards just get out of the way.

Every Australian should take a few minutes to watch this and then demand your Greenies shut up until they buy a herd or two themselves.