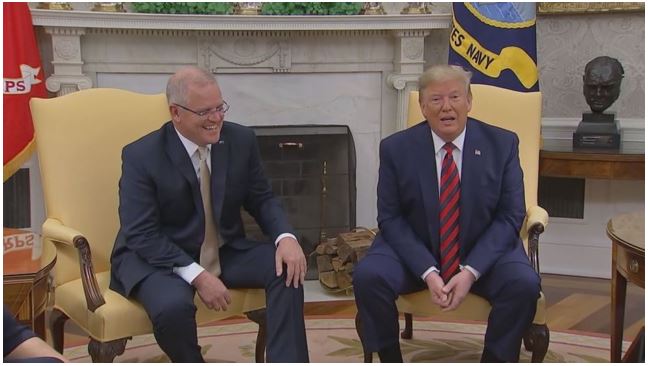 ScoMo and Trump trap Media at ‘100 years of mateship’

There have only been two official State visits since President Donald Trump took office. PM Scott Morrison and his wife Jenny are the second.

The Rose Garden was bedecked in green and gold to celebrate the event, and every Australian celebrity worth their salt – from Greg Norman to Lachlan Murdock – was in attendance.

Perhaps the biggest scandal among many in the Obama Administration occurred when his Vice President, Joe Biden, blackmailed Ukrainian President Petro Poroshenko.

The General was developing a criminal case against Vice President Biden’s son, Hunter, for corruption as part of their investigation into Burisma Holdings.

That was quite a quite an achievement for someone with no experience in natural gas or Ukraine law. What’s more, he was fresh out of treatment for his cocaine addiction, which had gotten him kicked out of the U.S. Navy.

For two years now, President Trump and conservatives have pressed for investigations into these crimes in the Ukraine (not to mention Biden’s son receiving $1.5 billion from the Chinese government).

Predictably, both criminal foreign influence schemes have been wholly ignored by the Left leaning press and even the Department of Justice.

Both of these institutions are staffed almost exclusively by Democrat operatives with but one goal. They are determined to take down President Trump by any means necessary—legal or otherwise.

So how did Trump snooker Media and Justice into
doing their jobs?  He made the scandal about Trump!

Never before has a trap been so beautifully laid. He nailed them to the wall and not a one of them was smart enough to see it coming!

And ahh!  It was beautiful!  The tip came from an anonymous leaker—who cannot really be ‘anonymous’ if he is one of the few people on earth with the clearance to listen in on presidential phone calls.

This leaker allegedly told the media that President Trump had called on the new Ukraine president, Volodymyr Zelenskyy.

He said, that Trump had asked him to look into the corruption his predecessor’s Chief prosecutor had found but dropped, after threats and financial extortion from a U.S. official.

The US official was, of course, Obama’s Vice-President, Joe Biden who demanded that the prosecutor should be fired.

Trump just smiled the next day when they asked about his phone call and began reciting Joe Biden’s crimes which they had all failed to report on.

There was bribery, obstruction of justice in a criminal investigation, extortion and blackmail of foreign officials under colour of law, taking family bribes in exchange for lenient trade treatment – just to name a few.

Trump recited them all on camera for everyone to hear and that’s fair dinkum for the president of any country.

In fact, it’s his job. There was no pressure, according to this (‘intentional’) leaker and no suggestion of a quid pro quo.

Trump was simply leading his country. Since the leaker hinted that the story was about Trump, however, the media all drank the Kool-Aid.

They didn’t realise it was just a set up to get them to force the Biden story into the limelight. And it did. It’s all over the news today, after years in hiding.

Then, at the end of the presser – when President Trump had them down for the count – he said, “I believe that’s 22:0.”

He all but told them that they’d been set up. “You’ve gone after me at least that many times on false stories and I always win.

“You’ll never learn,” said Donald. President Trump even begged them to “double down on this one,” telling them that they were only making themselves look more foolish.

Fortunately, that’s what they do best, and if today’s news is any indicator, he’s got them on the ropes.

The story cannot be ignored any longer as the Media rats and DemocRATS took the bait—every one of them—and now it’s everywhere.

It’s like a divorce lawyer grilling his client’s husband under oath in court about infidelity and demanding to know ‘who’ – only to find out that the husband was sleeping with the lawyer’s wife. Oops! Maybe shouldn’t have asked that!

You’re already ahead of the curve

Richardson Post readers are way ahead of the curve, of course, as we reported on Obama’s criminal enterprises in Ukraine before HERE

The Democrat National Party was bribing Ukraine officials to ‘dig up dirt’ on Trump’s campaign team and by Biden’s own admission, he’d been there “12 or 13 times” before the bribery scam, so the Democrats were heavily invested.

John Podesta, Hillary Clinton’s campaign chief, headed up the scheme, eventually leading to the arrest of Trump’s campaign manager, Paul Manafort, on charges completely unrelated to Trump from many years before.

Meanwhile, John Podesta’s own brother Tony, was doing the exact same thing as they accused Manafort of doing – but for the Ukraine government, the Democrat National Committee, and the Clinton campaign.

In short, they were acting on behalf of a foreign government without registering as a foreign agent in order to do so. Same thing, same country. Republican goes to jail and is ruined; Democrat is not even questioned.

Clinton’s team illegally colluded with the Ukrainian government to gather this information known as ‘The Black Ledger’ to use against Trump’s people.

But it turned out to be false and fabricated for that purpose—yet another fraud—obtained through collusion with a foreign government, which is a crime.

Sadly, the United States has a two-tiered system of justice. One is for Democrat criminals, who always go free—another is for Conservatives, who go to jail even if they did not commit a crime— (been there done that, as a Republican).

So how stupid is Joe Biden?  Well you decide….

You are Vice President of the United States. You fly your coke-head son around in Air Force Two, hooking him up with corrupt oligarchs at Burisma Holdings, who just three weeks later make him rich, ostensibly, to divert a federal criminal investigation that is already underway.

Of course, a few million is just not enough – the boy’s got expenses you know. So, you fly him to China on Air Force Two and set up his unknown company, Rosemont Seneca, for some real money—$1.5 BILLION in Chinese government funds to ‘manage’—while Daddy is off with the Chi-coms being complicit on trade.

Oh, and by the way, Hunter Biden’s ‘partners’ are Secretary of State, John Kerry’s kid and the nephew of convicted mobster, Whitey Bulger.

You won’t hear that in the mainstream press for some months—but The Richardson Post always gets you the whole story ahead of time.

In fact, it only came out yesterday from President Trump’s attorney, Rudy Giuliani, that $5 million was moved by the Ukraine company, to Cyprus, then to the New York accounts of these young men at Rosemont Seneca.

That could possibly add money laundering crimes to their rap sheet(s).

Now, if you’re Joe Biden and you get away with all of this bribery, extortion, blackmail, and influence-peddling schemes to enrich your friends and family, it’s probably a good idea to be a little low-key about it, right?

Not for Crazy Joe. He actually bragged about these crimes at the Left-Wing Council on Foreign Relations, knowing he was amongst comrades, but oops again—it got caught on film—and some American patriots found it.

The Media got punked by Morrison and The Master—and I’m betting ScoMo was in on it!

When it finally dawned on the media this weekend in the Oval Office press conference with PM Scott Morrison that they had opened Pandora’s Biden Box, no amount of interrupting the President was enough to shut him down.

The truth the media had hidden from the public since 2014 to protect the Democrats in the mid-term elections and to cover for Biden’s run for President, came out on their own live feeds.

The President had them where he wanted them, and they knew it.

If they tell this story now, it will take down leading Democrat candidate, Joe Biden, before month’s end, and they know it.

But if they don’t, then what little wind is left under their wings will be gone – and they will crash. CNN is almost to ground zero already and the others are in the flight pattern, running on fumes. The Fake News media will be reduced to stains on the carpet of time. New media is already rising to take its place like One America News Network (OANN) and The Epoch Times.

Public trust in the media is currently on a par with Congressional Democrats, lawyers and pedophiles–three groups with a lot of overlap– and they have no one to blame but themselves.