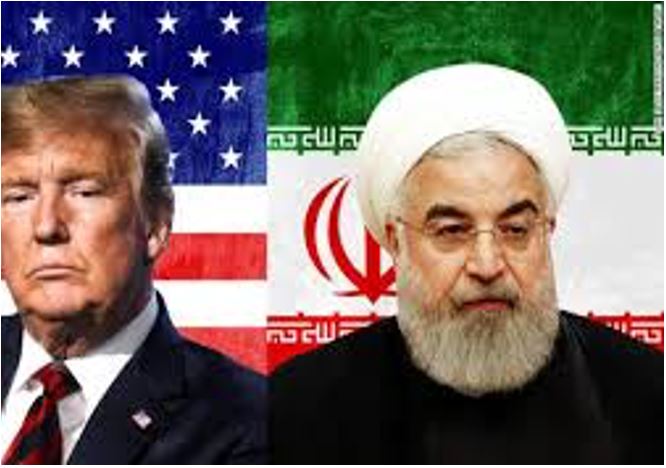 Trump ruins Rouhani’s narrative by withdrawing 50 soldiers from Syria – leaving Muslims to take out their own trash.

As soon as Obama left the White House, Trump wiped out Rouhani’s Iranian-backed ISIS in less time than it takes a Mullah to get a new sex-slave. That was bad enough—but now Trump has messed up Iran’s narrative for war.

Well, because he’s not going to hold, try, execute, or deal with the thousands of Rouhani-backed killers the Kurds captured while wiping out the Caliphate.

He’s leaving the Muslims to deal with their own trash, and it is infuriating Rouhani.

Trump to Iran: “Take out your own damn trash I’m not doing it”

Rouhani successfully reached out to RINOs (Republicans In Name Only) on Democrat media outlets today in America to stir the war hive and start them buzzing after Trump for taking 50 soldiers (yes, just 50) out of the Syrian hellhole.

But The Donald? He just smiles as he brings his young heroes home.

THE BRILLIANCE OF TRUMP’S MOVE IS BEYOND COMPARE

Every past president in my lifetime would have played by the rules.

They would have taken these thousands of murderous savages to Guantanamo Bay like the last few presidential fools did, creating a rallying cry and recruiting tool Iranians and other radical Muslims could use for decades.

What the RINO fools hazing Trump don’t realise is that the Kurds they misguidedly call ‘allies’ are Muslims too.  That’s worth repeating–the KURDS ARE MUSLIMS TOO.

The Quran forbids them to have any friends that are non-Muslim. The exception is for using and deceiving ‘Christians, Jews and other Kaffir [non-believers]’ when it suits them – to betray and kill them later.

“War is deceit,” as the Prophet (Profit) Mohammed said after setting this example.

Yes. It is Sharia, because that’s exactly what Mohammed, (the Muslims’ Perfect Man) did after the Battle of Uhud.

He savagely beheaded 800 Jews who fed and protected him, took the leader’s 14-year old, Safiiyah, as his sex slave, and sold the rest.

Below are some of Rouhani’s fine young men leaving their stronghold in Syria last year, after being trounced by The Trump.  These happy warriors just murdered 50 women–a good day in any Muslim man’s life, no?

They beheaded 50 of the women they had screwed for years and threw their heads in the trash.

The Muslims don’t want these killers either, but they’ll be the ones executing this scum and picking up their women’s heads, not President Donald Trump or his American soldiers.

This screws up Rouhani’s plans – just as Trump planned.

Like U.S. Democrats and RINOs—Rouhani keeps expecting this man to play by their rules.  It’s not happening.  And imagine what the Hate-Trump press, Democrats, and RINOs would say about Trump if he took thousands more prisoners to hold at Guantanamo Bay for the rest of their lives? Instead of this nightmare, he’s leaving them to their own kind–and their end will not be pretty.

Trump knows that the only thing Muslims hate more than him, is each other. Once he figured that out, it got easy.

Iran and Turkey will now go to war with each other – instead of the U.S.A., while Trump ties up Iran’s assets and drives its populace to revolution.  Mullahs’ heads on posts and all that, yes, you will see that.

When Trump pulled 50 American soldiers out of Muslim Syria, Kurdish Muslims took charge of thousands of ISIS Muslims they had fought (and hate) – in Muslim Syria – which hates them both in return.

You may have noticed that one word keeps repeating – Muslim.

Now what do you think these Muslims – all of whom hate each other – are going to do with thousands of Iranian-backed Shi’a killers?

That’s what has Iranian dictator Rouhani’s robe up his wicket.

Trump wasn’t supposed to pull out.  He was supposed to get the blame for what comes next.

So it’s worth asking how pulling 50 American soldiers out of Syria is a ‘betrayal of allies’. That’s what the U.S. press and even Republicans are screaming, as if these Kurdish Muslims won’t stab us in the back the moment we’re not needed–just as Mohammed did the Jews in Uhud the moment he did not need them.

If Trump had left these troops–about the size of a football squad–in Syria, they would have taken the heat forever for whatever Turkey, Syria, Kurds, or even Iran, ultimately do with this human trash.

Any thinker can see why Trump is doing this, but ‘thinkers’ are in short supply in my homeland, unfortunately.

THE ONLY SOLUTION IS TO LET MILITANT MUSLIMS KILL EACH OTHER

But containing Muslims so they kill each other in their own countries is better than letting them kill us and destroy Western Civilisation which is their stated goal.

Muslim society is structured for only one thing—war.  Rich or powerful men get all the wives and sex slaves they can afford, leaving few women for the masses of poor men.

This overproduction is intentional.

Islam requires expansion until the whole world is conquered. Mohammed demanded it in his Quran. Jihad must continue until all the world is under Sharia, dead, or enslaved. It’s in the book and everyone should read it.

What this man believed and did would make a Stephen King horror story blush.

The Quran requires these leftover men to infiltrate new places to colonise until they can rise up and take over. That is Sharia, and you cannot be a Muslim unless you accept jihad and this mission–or the Quran says that you must be killed.

I blame one man – and his evil master – for the Islamification of both Europe and America.

Barrack Hussein Obama made it happen for the human sleaze that made him possible – Geörgy Schwartz (a.k.a. George Soros).

Soros has done this in his effort to sow the seeds of world chaos. He will then offer a ‘Global Solution’ as an excuse to impose control over all of us – the Globalists’ goal.

I’m sure that sounds like a conspiracy theory but facts are lining up.

SO, WHAT HAPPENS NEXT?

Until Muslims are contained in their own countries, where the excess men without wives and sex slaves have no one to kill but each other, this sick political ideology will continue to spread.

Mohammed was an unlearned, orphaned goat-herder who sought greatness.

Good for him, but he chose the ancient Arabian Moon God of Darkness (Allah) as his image of deity, not ours.  Bad choice, M.

It worked, to a large extent.

His followers murdered 10 million souls in the first century of Islamic madness and that madness continues to this day.

One seventh of the world now holds this radical message of hate, slavery, and murder in their bosom.

By accepting Islam, all are sworn to the destruction of the rest of us who have not succumbed or been forced to take this disease into our hearts. America finally has a president who has figured out the game and thank God–the real one–for that.

I don’t know whether President Trump read Harry’s book “The Story of Mohammed” or not (I admit to sending him a copy in 2017) but he sees what Islam is and knows it is not healthy, good, or acceptable in a civilised world.

Rather than fight them, Trump’s letting them kill each other, which is what they do best.

RINOs and Democrats who have any remaining affection for their nation should be praising this man rather than seeking to destroy him.

Turkish Muslims will now fight Iranian Muslims, rather than American, British, and Australian kids. That is really good news for the rest of us – with the exception of Soros and the Military/Industrial Complex.