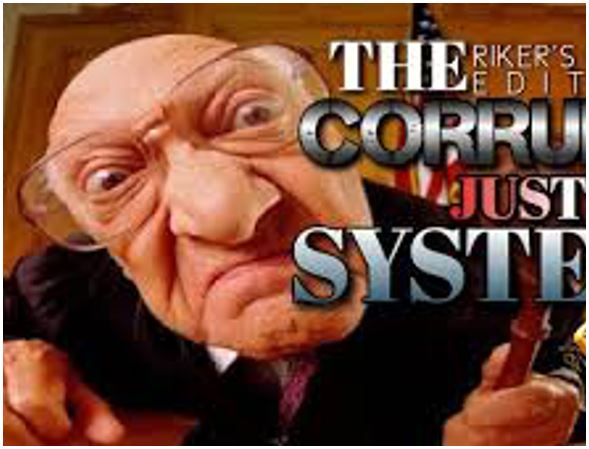 With an 82 % error rate, the American justice system is one of the World’s least reliable.

Harry’s note: There are two short videos further down in this article, I’d like to suggest you watch both of them. Howell’s story seems unbelievable. I was skeptical myself. After watching these movies, however, you will see that this is not just hyperbole. Truth sometimes is stranger than fiction.

I left Obama’s America and moved to Eastern Europe in 2015 after telling anyone who would listen about the uncomfortable facts of the US legal system in speeches, books and articles for years.

After being told I would be imprisoned if I did not ‘shut up’ it was clear they were serious. That is the reason I left the Homeland I love.

These were not idle threats. Aside from the fact that 54 other conservative journalists had already been jailed, intimidated and destroyed under Obama, I had direct knowledge that they would do it.  ‘Been there, done that’, as they say

And sure enough, U.S. Marshals were sent to my home twice in 2014 warning, “Shut up and quit speaking out or we’ll do it to you again!”

All one must do in America to run afoul of the Deep State is to be a conservative. We’ve seen this recently with President Donald Trump’s campaign staff—and even the President himself.

We now know that the Deep State set President Trump up, even before his election, using foreign governments as well as CIA, NSA and DNI resources.

Corrupt FBI thugs, Department of Justice Democrats, and their ‘life-time’ appointed judges generally take it from there.

So how exactly does that work?

First, they pick the target. In the case of President Trump, he was obviously the end game, but that’s never where they start.

The attempted take-down of Donald Trump began with lower level members of his campaign staff—Carter Page, George Papadopolous, General Mike Flynn and Sam Clovis.  What had they done wrong?

As history has proven, absolutely nothing.

In my case, they were after the head of the Republican Party in North Carolina. His name was Sam Currin and he had at one time been my client. You might say I was his Carter Page.

They intended to wrap me up in false charges, allowing me to escape life in prison only by flipping on the State’s Chief Republican and lying about things that happened (or perhaps didn’t) years after I knew him.

That’s how the first part works.

So, while they’re creating a case against their target, be it Donald Trump or Sam Currin, the witness is kept in jail to avoid getting help from counsel or getting his story to the outside world.

The press is manipulated by the FBI’s internal media department to frame the story, and media outlets rarely refuse them–a fact admitted to me since.

They publish any version of facts or fiction that match the prosecutors’ story, and I know for a fact, the FBI writes the stories. That was also admitted to me by the FBI.

That’s also the period when they apply maximum pressure – like they did with Trump’s campaign manager, Paul Manafort for example. He was held in maximum security at Riker’s Island – and is still there years later, I’m told.

When I refused to lie about my client of years prior, I was put in solitary for a year in what is known as ‘the murderer’s pod’—6800—in the infamous Mecklenburg County Jail.

Law and Constitution require a ‘speedy and public trial’ legally deemed as 70 days from arrest—though I’ve never once seen government live by those requirements of 18 U.S.C. §3161, et al (The Speedy Trial Act) or Amendment Six of the Constitution.

But not even Democrats can avoid court forever.  I was taken before a Magistrate Judge in the district of jurisdiction. Government told him I had an extensive criminal career at which time I jump up and say, “That’s a lie! I’ve never had anything but a speeding ticket!”

The Judge asks to see this thick ‘record’ only to find its pages blank—other than a speeding ticket at age 17—which had been dismissed.

Were the prosecutors censured or charged for lying to the court?

Of course not. It’s what they do with impunity and immunity in America today.

With no criminal career (or crimes) to discuss, my conservative writing and speaking career (back to 1977) became the prosecutors’ sole focus. They portrayed me as ‘anti-American’- because I speak and write in favour of the U.S. Constitution – the one they were trashing at that very moment in a federal district court.

The judge just shook his head, called the government’s case ‘bizarre’ and ordered me released right then, on unsecured bond.

Without fear of consequence—and immune themselves since the 1960s—the government’s goons illegally took me out of the district to one of the more corrupt judges in America.

He poached the case, voided the granted bond and let his buddies hold me for years. I never saw the court of jurisdiction again.

Third Step is a Charm

So, when the would-be witness refuses to lie for the FBI and Department of ‘Justice’ about their target, government gremlins really go to town.

I was alternately tortured in sleep deprivation programs, cold places without covering, hot places without cooling, while on ‘diesel therapy’- being ridden around unnecessarily on jets, buses and vans between dangerous jails and prisons all over America.

I was also beaten, only to be brought back occasionally to see ‘if you’ve changed your mind’ about lying for them.

When those 29 trips to as far west as Oklahoma, as far north as New York, and as far south as the Georgia/Florida border didn’t work, they have another trick.

They arrest your family members and/or tell you they are ‘under investigation’ and will only stop when you capitulate.

Fortunately for me, Sam Currin fell on his own sword for whatever he had done or didn’t do, and I only had to say I wouldn’t dispute it.

Eventually, you’re just forgotten and held within the system long after their ‘target’ is ruined and free.  Your crime is the worst. ‘Failure to co-operate’.

Yes, that all happened—and it is more common than not. Here’s a short award-winning documentary film based on my first book, Justice Denied: The United States v. The People, about what they did. The story was corroborated by a federal judge.

You see, they don’t really ‘get it wrong’— it’s by intent

In articles, speeches, and another book, Justice Restored: 10 steps to end mass incarceration in America, I wrote and spoke about this systemic corruption which put me in the crosshairs of Obama’s Department of ‘Justice’ again:

ALL I DID WAS THE MATH—

Multiply this by 71 million souls

= 58 million Americans likely convicted or murdered by the United States outside of law since 1973.

Fifty-eight million.  These are holocaustic numbers.

In making this calculation, I assumed that prosecutors and judges are as sloppy and lawless when trying cases without a death penalty as they are when they intend to execute the citizen.

But in actual fact, they are far worse.

After personally working on 400+ non-capital cases, I’ve yet to see one where prosecutor and/or judge did not violate Constitutional rights of the Defendant to the point of making the outcome undependable. Not one.

Outside Ombudsmen are the answer, to punish criminals of bench, bar, and public office

Any government actors who have such scurrilous records as America’s judges and prosecutors – knowingly and willfully violating the rights of citizens – must be charged, tried, removed and punished severely.

Unfortunately, that would empty the rosters of most government offices but surely it would close many courts in America – and so be it.  Something has to change.

No other profession in the world would allow an 82% rate of error.

The United States is the only nation claiming to be a ‘democracy’ that does not already have Offices of Ombudsman, so it is not a new idea or even mine.

This Ombudsman should be elected by the people within each district to act as their protection against government, which at present is non-existent.

This independent court would have the authority to charge and try officials who violate the public trust.

Such charges would be brought to the Office of Ombudsman by any member of the public harmed under colour of law by a public official, be they elected, hired, or appointed.

No mandatory qualification should be required for an Ombudsman other than being elected as a trusted member of the community.

They should be vested with the power to summon grand juries, indict public officials and hear evidence for and against the defendants. This would be followed by a public and speedy trial by jury.

In situations of judicial and prosecutorial misconduct leading to wrongful convictions or judgments, the Ombudsman would have extra powers.

My Ted-talk on ombudsmen did it. They sent U.S. marshals to threaten me.

No one should make government their life’s work.  That ‘life work’ becomes work for life and the accumulation of power and control attending such is corrosive for and to the healthy administration of a lean republic.

No more than 12 years in government for any position is enough – top to bottom.

Lifetime appointments for judges when life expectancy was 32 years might be one thing, but quite another now that the bastards live forever.

If President Trump wants to ‘drain the swamp’ overnight, he can legally establish Offices of Ombudsman in all 93 federal districts and the District of Columbia.

These would have the power to put the Andrew Weissmans, Bruce Ohrs, Peter Sztroks and Lisa Pages in jail when they fabricate cases against citizens and violate their rights of due process.

If President Ulysses S. Grant could establish his “Department of Justice” back in 1871, then you can establish one of real justice for the People, President Trump.

So, here’s an idea for the attempted coup’s ringleaders who tried to take down a duly elected president, Donald J. Trump (and whose minions are still in the Deep State trying to depose him), Directors John Brennan (CIA), James Comey (FBI) and James Clapper (DNI:

There is no ‘Department of Justice’ in the Constitution, President Trump.

This illicit agency was the invention of President Ulysses S. Grant – as will be another bedtime story. It was dreamed up over a drinking game in the White House to politicise federal power against Grant’s enemies after the Civil War.

That’s how it started in 1871, and that’s how it is today.  A blunt political tool as you have now seen up close and personal – used against Conservatives.

It’s time to give We the People – and yourself, Sir – protection against this illicit bunch of overpowered thugs.

Independent Offices of Ombudsmen in every federal district, Sir. It’s legal for these to be established under Article III of the Constitution and it can save our nation from the Deep State by returning power of oversight to the People.

Let us put a few of the worst in jail for life and let The Supreme Court hang the leaders—after a public and speedy trial, of course. We’re not the French Republic.

Many of you may think that’s overly harsh. I might once have felt that way myself.

But try having a judge with no more authority than Tinkerbell order you to be held for 87 months in jails and prisons all over your nation without ever being convicted by any court of jurisdiction, losing your family, your wealth, your reputation, and everything once held dear – then get back to me.

YOU HAVE TO LET US IN TO YOUR COUNTRY…