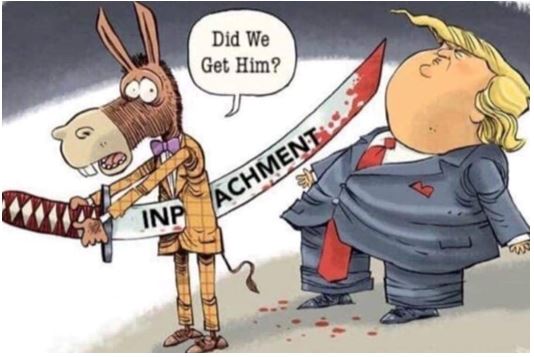 Democrat Traitors About To Be Prosecuted

Hunting a wounded bear can be quite dangerous. The bear has little to lose.

And when the Deep State Chiefs of the FBI, CIA, NSA and the DNI (Director of National Intelligence) colluded to prevent Donald Trump from being elected President of the United States, they had the gun.

They fired what they thought to be a ‘killing shot’—but they missed.

Then they set traps on every trail he might go, sure they could take him down once in office.

Missed again. The traps were sprung, but no meat.

And now—the bear has the gun—and he’s on the hunt for his hunters.

A report on the coup has been in the works for several months now under legendary prosecutor of government criminals, U.S. Attorney, John Durham.

The fact that this undercover operation existed is now beyond dispute—and the time for these powerful criminals to pay the piper appears to be at hand.

Rumours persist that a grand jury was convened by Durham in his home state of Connecticut earlier this year to seek indictments against Deep State conspirators for their attempt to take down the President.

Coup co-conspirators include former Directors of the FBI, CIA, NSA, DNI and second-tier spooks and collaborators too numerous to list.

2) they have all been replaced with patriots who actually like the new President of the United States, which bodes poorly for Obama’s enlistees.

Trump Hater, Teresa May, as example, was turned out to pasture in favour of Boris Johnson—who swears he is a Trump ally—and no lover of Soros.

ScoMo is running Down Under and one of only two leaders invited to hang out at the White House with Trump. ScoMo and Donald are mates.

Italy’s one-world Lefty PM, Matteo Renzi was turfed out by nationalist admirers of Trump the likes of Giuseppe Conte and firebrand, Matteo Salvini—vociferous opponents of George Soros and his One World plans.

Ukraine’s new President, Volodymyr Zelenskyy, claims to have patterned his campaign and presidency after Donald Trump.

He recently proved it by reopening the investigation into George Soros, Vice-President Joe Biden’s family; Obama Secretary of State John Kerry’s family; and the corrupt corporate crossroads of Burisma Holdings.

He did that before even being asked to do so—in spite of blackmail in May of this year by Democrat Senators Robert Menendez, Richard Durbin, and Patrick Leahy to withhold aid if he did.

Undaunted by thugs of the Democrat Party in America, President Volodymyr Zelenskyy has the key to Pandora’s box and is opening it as we speak.

How Will It Turn Out?

The year I was born, 1953, Julius and Ethel Rosenburg, were executed for passing secrets her brother learned working on The Manhattan Project to America’s enemy, the Soviet Union.

That, I believe, is the fate traitors should face.

And that was small potatoes compared to the criminal enterprise now exposed that is so vast and powerful it can rightly be considered a threat to all free nations.

Is that an overstatement?  I don’t think so and here’s why.

Can We Escape the Swamp?

If Barack Hussein Obama could openly and notoriously use the CIA to collude with shadow governments made up of allied Deep Staters in other nations to prevent and/or take down a duly elected president of the United States, then all of our republics and so-called ‘democracies’ are little more than figments of our collective imaginations.

We are all simply living in an imaginary matrix thinking we have a say in our own destinies, when all is apparently decided and done at a subterranean level.

If we don’t see action against these criminals soon, it may already be too late.

Where Are The Swamp Rats Now?

Where is John Brennan, as example, the man Barack Obama ordered to commit and co-ordinate these crimes across borders, boundaries and law?

He’s a free man—a paid commentator on CNN whose sole job is to bash President Donald J. Trump instead of being in solitary confinement awaiting trial for treason.

The fact that John Brennan is free would indicate that this shadow underworld already has control—and I hope that I am wrong.

America’s FBI was also weaponised by this league of traitors—and they’re all still walking the streets; from James Comey and Andy McCabe—to the new American Rosenburgs, Bruce and Nellie Ohr—the fabricators and disseminators of the Russia Hoax to take down President Trump.

Another key cabal co-conspirator, James Clapper, has also escaped punishment to date, and is being rewarded for his role instead.

As Director of National Intelligence, Clapper put all his nation’s Deep State resources at the disposal of this criminal cabal and co-ordinated with his foreign Deep Staters in an illicit attempt to destroy Donald J. Trump.

If those who participated are willing to take out their own elected leader, you can bet they’ll be willing to destroy yours if that’s what is demanded of them.

Where is Jim Clapper today?

He’s on CNN bashing President Trump and calling him a traitor.

Swamp Rats Need To Be Dealt With Permanently

There is only one way to prevent this from happening again.

The Deep State commandos in all our governments must be put down like the rabid dogs they have become.

If they are so powerful that they can attempt a coup to overthrow the President of the United States, then they are too powerful to exist at all.

Co-operation between allies is one thing—and even sharing certain pieces of intelligence perhaps—but boundaries need to be re-established in every sense of the word, and collusion such as this made a capital crime.

We must become fiercely proud patriots of our own lands once more—not citizens of the world controlled by such people as are now being exposed.

Perhaps the new leaders of the nations that participated in the Obama Administration’s attempted coup will rout out and deal with their own traitors who participated in this evil affair, as a lesson to others.

We are told that U.S. Attorney John Durham’s report may become public as soon as next week.

What happens after that will tell whether rule of law will be restored—or if it’s already too late.

If there is no penalty for those who participated in this coup in each of our nations, Western governments will have proven impotent, emasculated, and already in league with the One Worlders.

May God help us, and I think we’ll know more about where He (or She) stands next week.