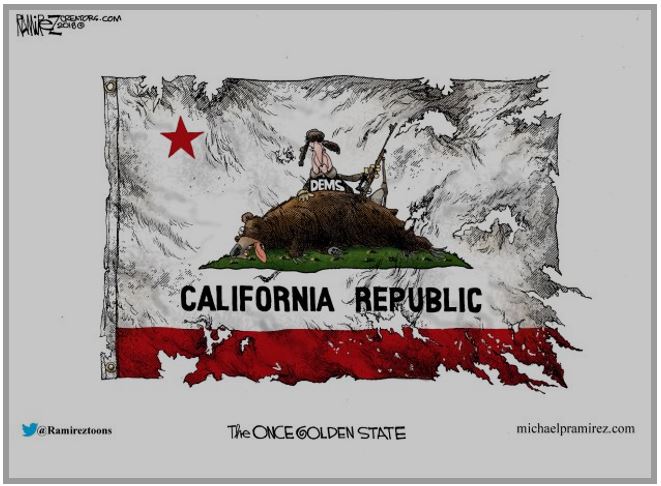 The Bookies said Venezuela’s record of going from richest to poorest in just 7 years would stand forever.

But thanks to violent Socialist policies established by Democrats in “The Golden State,” it is rapidly turning brown and smelly like Venezuela in a record five years – and now even life-long native Californians are fleeing in droves!

Yes. California under Nancy Pelosi’s nephew, the incompetent Gavin Newsom, is racing to ignominy at such a rate that it may well beat Maduro’s record in destroying South America’s richest nation—Venezuela!

Remember a few weeks ago when we wrote about American cities ruined by Democrat Socialist policies?

Los Angeles had roughly 22,000 displaced American citizens and veterans living on its poo-covered streets when we published that review.

Guess what? In less time than it takes a caravan of border busters to walk from Honduras to California, that number has jumped to 35,000.

35,000 Americans live on the streets in Adam Schiff’s District!

Schifty Schiff is so busy trying to impeach President Donald Trump for ‘High Crimes & Misdemeanors’ (yet to be identified or named) that he just doesn’t have time to do anything about the death of his own District, State or people.

Oh well!  Schifty will just use those 1.5 million illegal voters on the rolls in his district one more time before giving them up (you know, the dead people still voting Democrat ordered by the courts to be removed earlier this year).

Once a Comrade is in the White House instead of Trump, Schifty Schiff knows it will all be forgiven!  “Got to break a few eggs to make an omelette.”

New York Times reporter, Walter Duranty, infamously said that of Stalin’s murders in Russia and starvation of tens of millions of Ukrainians to force Socialism on his subjects (to which George Orwell replied, “where’s the omelette?”)

So what’s up with the power outages. Why can’t they keep the lights on?

First of all, sun power is not very effective at night, though that is seemingly a revelation to Democrat Socialists.

Second, the mandatory ‘renewable energy’ demanded by the California branch of Climate Socialists thought there was enough hot air emanating from the State’s Capital to power with wind.

They were apparently wrong on both counts.

And how about charging all those electric cars they’re now forced to buy? Surprise, surprise!  It takes electricity to do that. That requires coal, nuclear or natural gas to work reliably and all of these fuel sources are under violent attack.

The California power company, Pacific Gas & Electric (PG&E) has been slugged with a financially devastating tax on fuel by the Socialists.

This has been followed by taxes on the energy produced by that fuel, while being throttled by stifling regulations in hopes of forcing PG&E into giving itself up to be a State-owned Socialist Enterprise.

But preventing the company from making a profit or upgrades for years is now causing fires—not just in California’s unkempt forests like last year—but in the burgeoning poverty internment camps and Democrat plantations in its
largest cities—where there are no (legal) power hook-ups.

But there is a silver lining to The Socialist Republic of California!  The moving business is on fire!

The exodus became so severe that the Socialists put an exit tax of 13.3% on ‘the wealthy’ (pretty much anybody with anything is leaving).

In February of this year before the worst effects of Pelosi/Newsom Socialist policies took effect— 53% of Californians were making plans to leave while they still could.

That number has no doubt exploded since prices on everything reflect the tax hikes on Californians. Combined with illegals flooding in to get the Socialists’ new ‘free’ stuff at the remaining taxpayers’ expense, the jig is up.

California has a real chance now of beating Venezuela on the race to the bottom.

Tax-paying citizens are fleeing California—and no one is coming in except illegal aliens sneaking across the border from not only Central America, but the Middle East, Far East and Africa with nothing but what’s on their backs—leaving a massive shortage of moving vans.

So, while the U-Haul Van and Lorrie rental business is having a record year, California is dying in record time. Yes. It appears they are on schedule to beat Maduro’s record in taking Venezuela to its demise on the altar of Marx.

The numbers don’t lie. Renting a van from Texas to California costs roughly 25% the cost of one from California to Texas.

They’re so cheap, in fact, they’re being used to haul produce from booming Texas to the once ‘Golden’ state—cheaper than using your own truck.

So, what’s the answer?

With all the doers and makers being replaced by idlers and takers, there’s little hope, but even the stupid are starting to smell the coffee after seeing the signs of doom.

The constant power blackouts are affected the cost of food dramatically.

Cold storage facilities are down for days at a time, so food must be kept cold using expensive generators—or thrown away—further increasing the cost of that which remains.

Housing?  The only affordable places to live are tents on the streets.

And all the public money that could be helping Californians is being re-directed to illegals in the new ‘sanctuary’ Socialist state in the name of ‘compassion’.

Compassion for whom? And that point is starting to dawn even on street people.

Socialist Democrats care more about taking care of non-American illegals to buy their vote for the planned takeover of America in 2020, than taking care of those who elected them and pay their exorbitant salaries.

But Pelosi and Newsom Elites underestimate the intelligence of Californians.

That is admittedly unlikely as the brainwashing began two decades ago—so California Socialists are doing magic tricks to hold power until they can join hands with their East Coast Elites to squeeze the United States into the trap of Socialism—Democratic Socialism!

So a distraction was needed! “Let’s build a shiny high-speed train to nowhere!”

Yes. That will do it.  Take the minds off the public mess by building a shiny object—that doesn’t work.

While planned as a short trip from Speaker Pelosi/Newsom’s tent cities in San Francisco to Representative Adam Schiff’s tent cities in Los Angeles, they have yet to have a train– or a track–that works after eight years.

Don’t get excited folks! It’s a Soviet-style visualisation! No train….

So, the new finish date is set for 2033 – three years after these same fools claim we’ll all be dead from Global Warming.

Truth is though, temperatures haven’t budged in 15 years -except by going down 1.3 degrees.

The original price tag of this fantasy project was high enough to fix every problem in the State of California (other than government stupidity). It was to be a staggering $53.4 billion.

Unfortunately, with the Democrat Socialists’ penchant for graft and corruption, they actually ran out of money long ago.

Yet there is still no train, and tracks were placed on land not legally ceded to the State. Oops!

So eight years later, they can’t move a pumpkin between two burghs, much less their cities full of tent people (who will soon be their main inhabitants).

The Socialists are already up to $79 billion squandered with nothing but errors to show for it.

What’s more, between their attempts to impeach President Trump—they’re now begging him to bail them out.

They must think he’s a Bush or a Romney.

He’s billionaire, Donald J. Trump, and he didn’t get that way by being a chump.

And just one more thing—the Drought

Yes, just as in the book of Jeremiah, California suffers the punishment of Judah ‘as God’s righteous judgement for her sins’.

The people of California find themselves in the relentless grip of a drought -though in reality, it may be caused by their Trump Derangement Syndrome instead of God.

But what they hate so much is also what might save them in 2020.

Beating Venezuela to the ruin is nothing of which to be proud, California. Go back to God and Republicans, so Ye might yet be saved.

OK, I’m not really pressing religion, but reclaiming a belief in who and what we are must include the elements that made us. Our Judeo-Christian heritage is a very large part of that.

As they sing before each Trump rally,

“You don’t always get what you want,

but I think you’ll find that just sometimes,

you get what you need!”

Let’s hope they figure that out before 2020.