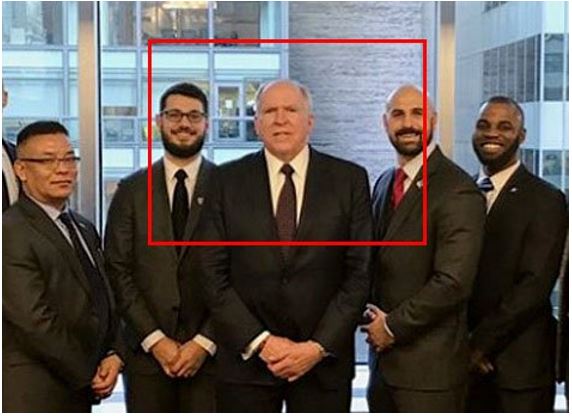 What is CIA Director John Brennan doing at Hakluyt? Nothing good.

Believe it or not, I knew these bastard “spooks” way back when. My former business partner was a former O.S.S./CIA operative, and once in, you’re never out.

They all shopped at the same places—Russian, American, German, even the effete Frenchies. It was kind of like sorority sisters dressing the same except in an intentionally non-descript ‘spook’ fashion.

A Spook’s normal day back in the 1980s started with reading the Financial Times. Once that was done, they would scan the “rags” as they called them, to find out what was really going on (like Tommy Lee Jones did in Men in Black).

The favourite hangout for these creepy spooks was The Odd Fellows Club and The Golden Guinea before they went corporate during the Clinton era. If one’s parasol went missing after being ‘over-served’ (read: getting s$#t faced) or was forgotten, we would put international intelligence into overdrive.

Umbrella retrieved from the bar, my partner might stroll to Swaine Adeney Brigg (the posh luggage shop that charges AUD10,000 for a briefcase) to scope out other Spooks like some chick looking for a Prom Date. In this case however, it was to seek relevance.

Where do spies do their shopping?

Spooks all shopped at James Lock & Hatters on St. James in London, when they needed a new topper.

They wore different styles of hat, of course. Berets for Frenchie, narrow brim for the Ruskie, and wider for Brits and Yanks, but all came from Lock & Co.

Shoes? All spooks wore non-descript lace-ups with a crepe sole for sneaking quietly into and out of bars— from Church’s Shoes.

And after checking out all their shopping places John might issue, REPORT- May 1, 1980 – ‘Former KGB agent spotted in SAB at 11:00 a.m. being fitted for umbrella.’ Then it was off to ‘The Guinea’ for a morning eye-opener.

They never produced real ‘intel.’ It was just bullshit to stay in the game—or feel like it.

William J. Hood was a frequent visitor to our office.  I started putting it all together after seeing him interviewed by Charlie Rose on TV one night. He was talking about his decades in the CIA.

When I confronted John, he got angry and said he didn’t introduce me to ‘certain people’ for a reason. “He’s on the damn TV, John,” I answered.

Bill Hood was the screw-up who removed Lee Harvey Oswald’s name from the list of potential threats just before he assassinated President John Kennedy.  Oh well. His punishment?  He was moved to Europe. Kind of sounds like a promotion to me.

So, does the CIA ever get anything right?

No – is the short answer.  They’ve missed or messed up every major event in my lifetime. From their Cuban Bay of Pigs failure (and ‘allowing’ the assassination of President John Kennedy), to ‘missing’ the 9/11 attack. That was then followed by their “Weapons of Mass Destruction” lie to get President George Bush to invade Iraq.

This highly controversial agency of complete idiots, is forbidden from existence by my nation’s constitution. So, President Harry Truman created it illegally—by ‘Executive Order’—which he quickly and openly regretted.

During World War II, the O.S.S. (Office of Strategic Services) were a bunch of warmongering drunks under the leadership of ‘Wild Bill Donovan.’

Truman took these losers and turned them into the Central Intelligence Agency. That is a complete oxymoron as I soon realized after watching these dregs float in and out of our office. Hearing many of their conversations after a few drinks were tossed back just confirmed it.

So when Obama appointed John Brennan, as his Director of the CIA ‘intelligence,’ I prepared for the worst. Johnny B is a self-confessed Communist, but he has still surprised even jaded old me.

John Brennan is perhaps the most power mad, evil-doer ever to set foot in government from what I’ve learned of him. Like the President he served, Brennan despises everything my country is supposed to stand for.

Back then, the spooks would make constant references to “the Kennedy thing.” I’m pretty sure they weren’t talking about Chappaquiddick, but I had no idea they would try to take out another president.

It was public knowledge that Brennan farmed out illegal spook work to his retired buddies at Hakluyt–as evidenced by the pictures–a ‘visiting client’ it seems.  Johnny B’s one of the boys and New York was his old turf after taking over from Cofer Black, the spook who let the 9/11 killers in–after Johnny B authorised their visas in Saudi Arabia as head of the CIA office there.

Hakluyt is a private company made up of employees who formerly worked in governments or agencies like the CIA, GCHQ and MI6. Simply put, Hakluyt does things governments cannot legally do themselves.

After a career of screw-ups, spooks and diplomats can prostitute themselves and their connections out for dirty deeds. What kind of deeds you ask?

Oh, I don’t know. Like, say, eliminating a pesky candidate such as Donald Trump who is not from their ‘club.’ They could then put one of their own in power who can be controlled – like Hillary Clinton, for instance.

This bizarre spook outfit also operates from Mumbai, Tokyo, Singapore and Sydney and is the hand-maiden of the Deep State. It performs illegal acts but is protected by those it serves.

This is where all the bad actors who tried to take down President Donald J. Trump intersect

From Australia’s Alexander Downer and Maltese Professor Joseph Mifsud (who started the Russia Hoax on CIA Director Brennan’s behalf), to Robert Hannigan (Director of GCHQ) and Christopher Steele, (the former MI6 spook who created the dossier for the Democrats to get FISA warrants to spy on Trump)–all have connections to Hakluyt.

Hakluyt’s Board is made up of former Ambassadors, Government Ministers,
Directors of GCHQ and heads of the world’s most powerful companies.

Attorney General William Barr has been looking into the origins of the Spy-Gate Russia Hoax since May, and it was just announced over the weekend that the probe has been turned into a criminal investigation under the watch of U.S. Attorney John Durham.

So, remember Hakluyt in coming days. It may well be in the news.

Johnny B farmed out his dirtiest work to Hakluyt (as I’m sure we will soon find out). He will doubtless throw them under the bus in an attempt to avoid prison—or execution—but it won’t work.

This was Johnny B’s coup and only one other person can take the blame for its initiation and that’s the man who authorised it—Barack Hussein Obama.

Could President Obama be indicted?

By law, Obama could and should be indicted because only a president can authorise a ‘counterintelligence probe.’

It was that probe which initiated the spying on candidate Trump, his campaign, his family and his businesses. Spying on American citizens not involved in foreign intelligence matters or foreign agents, however, is highly illegal.

Worse, Obama allowed his staff to weaponise the FBI and Department of Justice to assist in this scam and had Johnny B use the CIA to initiate it all.

This is unprecedented in my nation’s history to the best of my knowledge.

Obama’s direct involvement is no longer a question, however. It is in writing. There are recently disclosed e-mails and text messages between Lisa Page and Peter Sztrok – compromised top-level operatives in the FBI.

This is thanks to a private organisation, Judicial Watch, whose relentless filings in court forced the documents’ release. It was not the FBI or Justice Department. They were the perps and refused to investigate themselves.

These emails explain that “the White House is running this,” and that Obama’s Attorney General, Loretta Lynch, ordered them to keep her apprised of every move.

Obama’s Democrat party and the Hillary Clinton Campaign paid these shadowy foreign characters and organisations $12 million to dig up (or fabricate wholly false) ‘dirt’ on Trump.

Foreign spies and Hakluyt ‘associates’ then put together a dossier of this knowingly false information using Glenn Simpson at Fusion GPS as their front man, which they then laundered back to the FBI through Democrat Harry Reid and anti-Trump RINO, Senator John McCain.

Despite this, the dirty dossier was used to illegally obtain secret spy warrants on the Trump campaign from the federal FISA courts.

Will Obama pay a penalty for his crimes?

No.  It would be political suicide for anyone to put America’s first Black Muslim President in prison – no matter how much this miscreant deserves it.

But he must be indicted, tried and ruined or it will happen again.

So, we’ll just have to settle for Johnny Brennan’s execution and the imprisonment of much of Obama’s cabinet.

That would include his Ambassador to the United Nations and every other scumbag who participated in the attempted coup of Donald J. Trump.

There is a reason America’s Founders did not allow a national police force such as the FBI or spy agencies like the CIA and NSA to exist.

Their potential for abuse was and is simply too great.

You, Sir, have now personally suffered these dangers and should see that your greatest legacy might be undoing them. These agencies and their shadow government are too powerful to be allowed to continue.

You have said often that ‘this should never again happen to a President of the United States,’ but it is inevitable if you don’t put them out of business.

They were all created by ‘Executive Order.’ This power is not found in the Constitution – but if they could be created by such, they can be shut down using the same mechanism and you are the Executive.  Just do it.

As you extricate us from wars started (for the most part) by these same organisations and their activities, we can avoid most future conflicts simply by eliminating them and the troubles they cause.

And it is my hope that through your leadership, our allies such as Britain, Australia, New Zealand and others may also reign in or eliminate their own counterparts to these illicit agencies, to make our world a better and safer place.

THE BIGGEST LIE UNDER THE SUN