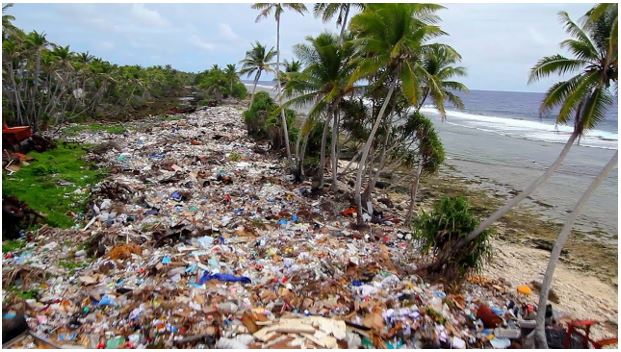 The Earth may warm in the future. That warming might be bad for the planet. It is possible that we are causing that warming by burning fossil fuels.

Perhaps if we shut down all use of fossil fuels, the temperature may not go up and that might possibly be a good thing–though recent evidence shows average temperatures dropping again.

It’s always risky making predictions, especially about the future. That, however, doesn’t stop our leaders throwing endless amounts of our money at their banking friends who claim they can stop the problem with “carbon credits” or “emissions trading schemes.”

But bring up a very real problem – like the FACT that 8 million metric tons of plastic garbage is being dumped in our oceans each year, just by China – and they’ll switch subjects on you in a nano-second.

No money or power in that one. Besides, many of their corporate bribes come from the culprits, so ‘mum’s the word’.

Over 90% of all seabirds have plastic in their stomachs. That is not surprising as there is an estimated 100 million metric tons of coastal plastic waste.

Those figures come from Ocean Conservancy. They are a private non-governmental group whose volunteers have removed 220 million pounds of plastic waste.

In other words, they are a group that is doing rather than talking.

It is the size of Mexico, yet it is not even the largest. To call this a ‘problem’ is an understatement.

SO, WHO IS RESPONSIBLE FOR THIS MESS?

CNN would naturally blame President Trump, of course. That would not jive with the facts, however (not that CNN would let the facts get in the way of a good story).

So, let’s look at where this trash is born to get an idea of who is really responsible.

A report by the Wall Street Journal gave a list of the worst dumpers of ocean plastic. The list was compiled after intensive studies and is as follows:

So, what nation will be asked to pay for the solution, and who (already) gets the blame?  The usual answers – The United States, and Donald Trump, respectively.

SO, WHAT ARE THE SOLUTIONS?

FIRST, alternatives to single-use plastic products need to be encouraged – not mandated – and perhaps the best potential resource – industrial hemp – just needs to be legalised.

I am not a user of the plant’s leaves or a fan of its other properties, but it’s uses for packaging are immense. In fact, presidential advisor, Steve Bannon, is actually testing ‘hempcrete’ to build President Trump’s border wall on private lands.  It can withstand much abuse, weather, and harsh treatment, but in the end is a biodegradable plant – and Liberals love to smoke it!

7.5 billion trees a year are cut down for paper, while hemp actually builds the soil where it’s grown and is renewable, requiring no irrigation.

Most single-use plastic and paper products could transition to biodegradable hemp. Nothing is really needed for this one but for government(s) to get the hell out of the way.

Could the Free Market Fix This Environmental Problem?

Well, as a guy who fell asleep during chemistry, I’m out of my territory here, but plastic is a petrochemical, in other words, a petroleum sourced hydrocarbon. So, if these two elements can be joined, then I suggest they can also be broken apart–and both are used to produce energy already–with hydrogen being not only clean but very efficient.

Furthermore, if both of these elements are fuels, then collecting the World’s ocean trash could be as simple as refitting old mine-sweepers with conveyor belts and repurposing them.

Put a processing plant in tow producing hydrogen, carbon or hydro-carbon fuels from the trash and you’ve got a potential solution simply by breaking the elements apart and reconfiguring them.

Got a better idea, let’s hear it, but with the right incentive – like a billion-dollar prize from these international organisations wasting trillions on The Global Warming Hoax – you can bet some bright young hero-chemists will find the solution!

Ocean trash to fuel could be one helluva business – while solving a real
problem.