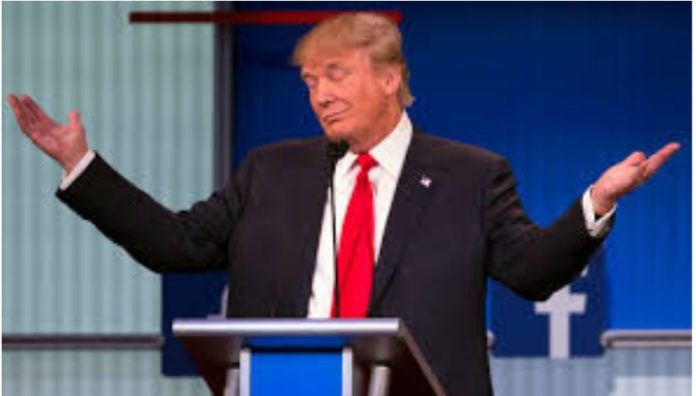 There he goes again!  Even optimistic predictions said 156,000 new jobs in January. Yet even while he was under impeachment – which is basically capital punishment for a presidency – Trump’s policies added 291,000 new jobs with the stock market hitting new record highs!

“When is this ‘winning’ ever going to stop?,” the Dem Socialists are whining!

How will the sad Marxists like Crazy Bernie (Sanders), AOC (Ocasio-Cortez), Nervous Nancy (Pelosi), Pocahontas (Warren) and Sleepy Joe (Biden) ever get a break?

They are nursing a dream of a Karl Marx statue replacing George Washington’s.

Sadly, at their ages – except for the kid, AOC – they may never see their dreams come true after Trump’s triumphant return to American principles, showing their power to the world!

The Media and Demdoodles call President Trump a liar

And on this point, I may have to agree, friends.  Trump has not been completely straight with us.

For example, he promised to eliminate enough Obama Administration regulations to free the energy sector – and did as he promised.

But he didn’t say anything about eliminating enough ‘stupid’ to make America energy independent (for the first time in 70 years) or to become the world’s largest exporter of fossil fuels!

So, while CNN and MSNBC got every other story about Donald Trump wrong for the past three years, they got that one right.  Yeah. Trump didn’t tell us the whole truth.

And what about Trump promising to cut ONE business-killing regulation for every ONE new rule even if the rule limited government rather than expand it?

That was his claim, but he didn’t say anything about dumping EIGHT rules for every new ONE passed!  What are all the Dem Socialist bureaucrats going to do if he keeps cutting the red tape they feed on for breakfast, lunch and dinner?

What a liar!  If only we’d known.  He promises something then does more. What’s up with that? That’s not what real politicians do!  He must be impeached!

And even though Obama made it clear to candidate Trump in June of 2016 that manufacturing jobs “are just not going to come back,” and made fun of him, saying “What kind of magic wand does he have?,” Trump didn’t listen.

He arrogantly ignored the wisdom of the Left’s favourite schmo and said he was going to use tax reductions and regulatory reform policies – you know, the stuff that made America rich in the first place – to lure jobs back to America.

The nation’s most famous Leftist economist – the Nobel Prize winning Paul Krugman (who has never once made an accurate prediction) – said of Trump’s manufacturing jobs promises, “Nothing policy can do will bring back those lost jobs. The service sector is the future of work.”

It’s funny how these guys like Obama and Krugman win the Nobels rather than the people like Trump who actually accomplish something, isn’t it?

So, let’s take a look at the Trump ‘lie’ about bringing jobs back to America

America lost 60,000 factories and tens of millions of jobs under RINO Republican George Bush and Dem Socialist, Barack Obama’s brain-dead trade and regulatory policies. That’s an astonishing number, but verified, in my opinion, as not one Never Trumper, Dem Socialist or media hack has ever disputed it – and if the number was off by even one, they’d have called him out for sure.

But Trump not only brought these jobs back via ‘policy’ (as both Obama and Krugman said was impossible), Trump set the stage for creating 5.3 million new jobs – and over 600,000 of them so far have been in manufacturing.

You remember, the kind of jobs the Lefties said could never come home – real jobs making things? They would have been right under their failed Socialist policies – and their Bush/Clinton/Obama policy of ‘managed decline’ for America would have continued, unabated.

And keep in mind, that this huge number of new jobs is before the multi-billion-dollar new factories now being built by Foxconn ($10B just on this facility), Mazda, Toyota, Braidy Industries, Volvo, Nucor and so many others are completed and staffed.

157 million Americans are now in the work force – more than ever before in American history – and it’s happened because of ‘policy’ – Trump’s policies – by simply returning to the American ideals that allowed that nation’s economic miracle to occur in the first place.

Reduce taxes to a reasonable level and free the market from unnecessary restraint – voila!  You’ve got an economic boom anywhere on earth, that only a Marxist could screw up.

So, I hope he keeps on lying

The middle class is doing something in America under Donald J. Trump that it hasn’t done in decades – it is growing. The average median family income reached $65,000 in 2019.

Unemployment for all races is now at historic lows, while gains in wages amongst the bottom 10% are double the percentage gains of the top 10%.

The Obamas and Krugmans said that was also impossible, absent their Socialist ‘redistribution’ schemes.

Wrong again, boys. Get out of our way and we can work miracles.

While government jobs increased six times faster than manufacturing jobs under Obama, those numbers have reversed under President Trump.

And it only seems to be getting stronger.

So long as his ‘fibs’ are on the side of exceeding what he promised to the American people – and the world – I think we can forgive him.