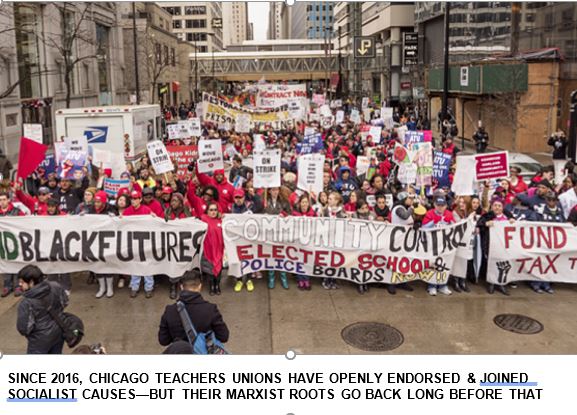 This week, a coalition of 10 teachers unions and the Democratic Socialists of America demanded the following:

They are holding a “National Day of Resistance” today in America to press their demands on the nation.

“Give us more money to not work and eliminate any union competition or we go on strike!”

Bold for a gang who’s been paid but hasn’t worked in 6 months. So how will we know they’re on strike?

This suicidal blackmail by the teacher’s unions is backfiring in spectacular fashion, and they’ve stupidly opened the door for much needed reform.

After teaching children/grandchildren at home for a few months, many families are scurrying for alternatives to public schools after seeing how easy, and beneficial a real education can be.

Homeschooling has exploded, as well as private neighbourhood schools where families join to hire tutors (or teach) and buy courses together, while taking turns as the meeting place in their own homes.

And what is truly devastating for the teachers’ mafia is that the kids are actually learning something of use for a change.

Interest in transgenderism, as example, is dropping like a rock.  If you don’t teach kids garbage, they don’t learn garbage.  Teach them reading and math instead, guess what?

And What About The Universities?

I’m very glad you asked.  We may be even luckier that the Wuhan Virus closed these Marxist indoctrination centres for an extended holiday than the grade schools, as our new leaders are coming from academia.

Professor John Ellis recently wrote in The Breakdown of Higher Education (2020), “I have documented a deliberate and relentless drive over many decades to make academia a political monoculture.”

Herbert Marcuse’s Marxist coup of higher education appears to now be complete, as 78.2% of U.S. universities academic departments “have either zero Republicans, or so few as to make no difference,” according to Professor Ellis’s research.

And what is taught at Princeton Law School and New York University School of Law these days?  Bomb-throwing and Marxist tactics, apparently.

They are literally being taught these things in universities and graduate schools as not only OK, but their duty as Marxist Revolutionaries

Ellis found, “The left/right party registration imbalance [in universities] was 8:1 for full professors, but the figure for the two junior ranks taken together was an astonishing 49 to 1,” (The Breakdown of Higher Education).

In fact, much of the front line direction—and protection—of the violence across America is made up of these 49:1 loopy professors and teachers who trained today’s BLM/Antifa violent rioters in Marxism.

Unable to indoctrinate them further in the classroom because of the dangers of Wuhan Virus the teaching has gone from hypothetical, to real-life experience on the streets.

The teacher’s unions find their root in the American Communist movement of the 1930s.  The AFT was officially partnered with the Communist Party between 1931 and 1944, so this alliance today is no surprise to historians.

But the surprise for the Marxist teachers unions and university monoculture may be that Americans, for the most part would prefer their children to be able to read, write, do math and get a job, rather than be Revolutionaries against their own nation.

Change is coming, and if these Marxists persist in teaching their own perversions and anti-Americanism to our kids, they’re going to witness a real revolution.

Get Howell’s new book, The Gospel According to Shem, where the Marxists lose their grip on public education—with a little help from Shem—and Donald Trump!