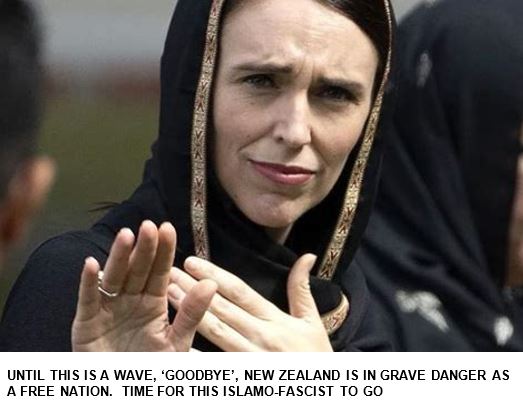 But what about all those New Zealanders who refuse to convert when Jacinda’s muslims have built their numbers for this act, which was mandated by Mohammed himself of all followers?

Quran 5:33 demands “They [us] will be killed or crucified, or have their hands and feet on alternate sides cut off, or will be expelled out of the land” (our lands–yeah–like New Zealand).

Now this Queen of Death is pushing euthanasia and assisted suicide—perhaps so the statistics don’t look so bad after her Wuhan Flu lockdowns, proven to exacerbate and encourage the Grim Reaper—so she can claim it was ‘assisted’—which was called homicide in New Zealand before Jacinda’s Reign of Terror.

How is it that all these Marxist leaders of Western nations–even if elected–are allowed to impose foreigners on their own citizens who are sworn to murder their electorate?

How exactly does that benefit a nation?

Serious, rational people know that it doesn’t, which is why they have been muzzled, tyrannised, harassed and generally beaten to a pulp every time they point out that these would-be Emperors are naked as jaybirds, while they think they’re clad in the latest style of burkha–like Jacinda.

There is no ‘they’ anymore.

There is only each of us, and if we don’t act boldly and now, there is no one else to blame when we are slaves in our own lands, but ‘us’.

Quit waiting on someone else to do something. Do it yourself. Stand up against the Socialist bullies.

Cross the borders. They have no legal authority to stop you.

Go ‘maskless’, knowing that a Covid virus is the size of a cue ball in two parking lot spaces compared to the holes in a mask, and comes and goes as it wishes.

All they want is to control us, so don’t let them have it. Just say ‘no’ and do so in numbers they can’t control. In other words, when you go ‘bold’, have a crowd with you.

As my favourite Stoic philosopher, Epictetus, advised millennia ago, we can only control ourselves and our reactions to injustice–not those who cause it. But when we stand up in numbers, the first to fold are the weak political class–always.

So what if we–the citizens of Western nations–rose up against this nonsensical Wuhan Flu business, took off our worthless masks that are doing nothing but causing lung infections, and said that before the government weakens us further with this virus nonsense, we’re going to beat the Muslims at their own game?

We’re going to take Mohammed’s advice and rise up first, telling the Jacindas and Karens and Dan Andrew-style tyrants we’ve reached a satiety of their bullshit.

We’re going back to work.

We’re accepting no more Islamic invaders to take our jobs and hard-earned money–or to breed children to rise up and kill us in the next generation, because we’re stopping their importation and protection racket now.

We’re taking off these damn stupid masks which allow everything to come and go except adequate oxygen.

They want to arrest us? We’ll be in the local pub having a pint after work–millions of us– and picking someone who will follow the rule of law and our Constitutions, which Marxists like Jacinda and Dan Andrews of Australia’s Victoria ignore.

Then, we’re taking back our schools and universities to teach history, math, English and the basics of a real education based on the exceptionalism of our amazing Western culture, rather than the ideology of a rich German kook who cost 167 million people their lives.

Maybe its time for the proletariat–us–to rise up and let our fascistic rulers know that it’s time for them to go for some re-education.

I’ll pitch in a bob for that.

We’ve had quite enough of them all, and we’ve got to let them know it in LARGE PRINT and LOUD VOICES.

Howell’s new book is available on Amazon, worldwide. God sends his angels to ask the most unlikely of messengers, “Shem”, to save the world from the Globalist, Islamists, and would-be tyrants who are building the new ‘Babel’–with a little help from a very special president. Order it today! 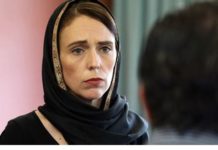 WELCOME TO THE DIGITAL GULAG