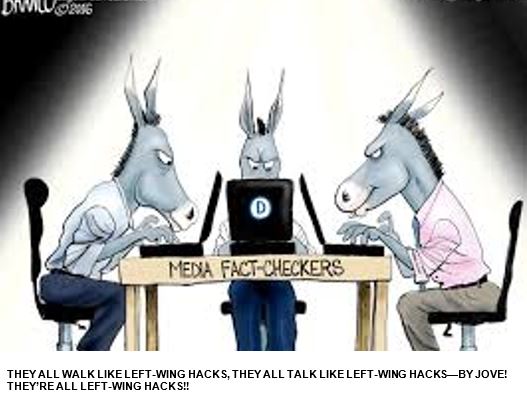 I first discovered the falsification of provable historical fact by these organisations while researching FASCISM a few years ago for a book.

Any student of history recalls that Fascism was the political construct first promoted and manifested in modern history by the Italian Marxist Party—the keyword being ‘Marxist’.

Its founder, Benito Mussolini, was an avowed Marxist—as is Fascism—his political manifestation of Karl Marx’s road to serfdom and death.

Yet, if one types “FASCISM” into the world’s hub of disinformation, Google—the search monopoly that controls 90.5% of searches—all the ‘fact-checkers’ will tell you fascism is a ‘right-wing’ philosophy and construct.

Hmm.  As the Marxists in control of our governments and education rewrite history in accelerated fashion, very soon the truth will be unknowable unless we begin fact-checking the so-called ‘fact-checkers’—and shut them down.

So clearly Google is run by Leftists hacks—but what about the others?

Good question—and since they are all intertwined, owned and controlled by the very same individuals, Tech Giants, and link back to themselves, they preach the same untruths to promote an agenda—not check ‘facts’.

Without any background in so-called ‘fact-checking’ these two Leftist hacks began their profitable enterprise to disseminate propaganda in 1995. Snopes still haunts the public, but David found that with all the money pouring in from Leftist supporters, foreign disinformation propagandists and governments, he had lots of extra cash to spend on his real passion- ‘prostitutes and his lavish lifestyle’— according to Bab’s divorce filing.

Not knowing that what happens in Vegas is supposed to stay there- including the hookers-Dave married this one and his investment grew. Eryn just sold her flesh, which is a rather ancient profession, whereas little Dave sold his soul as a liar for the left, going on to be sued by his business partners in Bardav, Inc. for multiple counts of fraud and embezzlement.

This site is owned by none other than The Poynter Institute—a leftwing think tank that promotes Marxist politicians and causes dear to the hearts of the billionaire Elites—and teaches ‘journalists’ to write #FakeNews.

And who supports The Poynter Institute?

As an interesting note, all their other donors, including George Soros, have been removed as well—which I’d like to think is due to our reporting about this outfit in The Richardson Post.

And who else supports this leftwing group?  Facebook, of course—who has now made Politifact its official ‘Factchecker’.

I think that says it all.

FACTCHECK.ORG just got busted for the biggest lie on the planet…well since the one calling Biden’s VP-pick, Kamala Harris, a ‘moderate’.

Yep.  They said that too—even after Joe Biden’s pick for VP was shown to have the Senate’s most leftist voting record—even more Marxist than Bernie Saunders—but that’s not the record-breaking lie to which I refer. I digress.

4,452 public documents prove that government officials and private actors have filed patents on SARS-Covid diseases, yet just three Gates-controlled Poynter Institute ‘journalists’ falsely stating a lie to the contrary were chosen as their only ‘sources’ by Poynter step-sister FACTCHECK.ORG.

Factcheck.org deemed this provable truth about the existence of such patents to be false—in spite of thousands of public records to the contrary.

Not only have NIAID, NIH, WHO—and CCP officials—applied for patents on the easily manipulated SARS Covid diseases (beginning as far back as 1998) they have now patented its treatment, devices to measure it, as well as the sole right to view the disease—which could prove its manipulation, so even looking at the virus had to be banned.

We can’t have that, now can we?

In real ‘fact’, the “Coronavirus isolated from humans” was patented by the CDC (Centers for Disease Control and Prevention) as US7220852B1—under the present disease tsar, Dr. Anthony Fauci—way back in 2004.

I found this CDC patent in just one search, yet there are hundreds, so the FactCheckers are nothing but paid liars to cover up what is really going on—to protect their funders like Bill Gates from any real scrutiny.

If you have some time to really dig into this amazing fraud on the world (hat tip to King of Hearts), you won’t do better than this timely piece just released undercover by ISE.media where it can’t be easily taken down by the false “factcheck” censors:

All our national leaders have now been compromised by this cabal which controls our information and its dissemination.

The CIA, NSA, GCHQ and spy pals all over the globe have amassed information on all their enemies (one admitting in private, “We have it all”) as also disclosed last week by The Richardson Post.

They now hold this data and information as private ‘contractors’ to leverage and blackmail officials from top to bottom—in all Western Governments.

This includes former CIA head, John Brennan, owning and directing the private contractor TAC (The Analysis Corporation) which accumulates and stores compromising data on all members of the U.S. Congress—and was caught illegally spying on the U.S. President.  Same guy.

I imagined just how we can fix this—with a little help from above—and it came from a dream, no less—which became my latest novel.