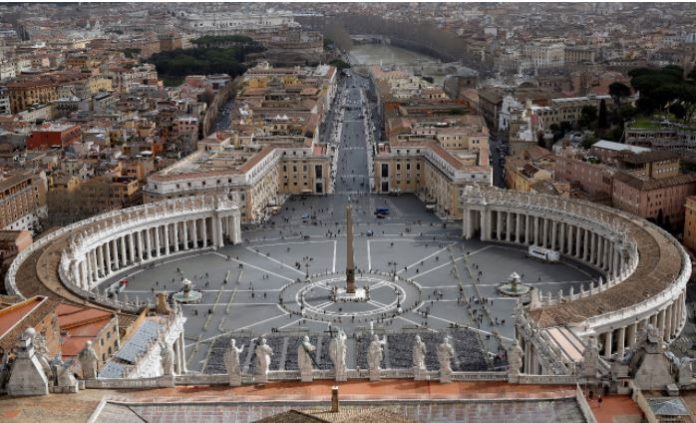 If that picture is real, then this is extraordinary on a number of levels.

But only 10 people know what President Trump is doing

And I’m not one of them.

I find it very interesting that one of the few men he still trusts – Secretary of State, Mike Pompeo – is so personally involved in the situation of the man we reported about just two days, again, making the assumption the photo leaked to us has basis in fact.

That man is the spitting image of William Lynn III in Rome, Italy, former head of Leonardo Defence’s U.S. Division, now admitted as the bridge to upload the vote switching from President Trump to Joe Biden.

Even if the photo is a fake, the court confession of one of his employees, Arturo D’Elia, former head of the IT Department of Leonardo SpA, is of record, and we have a signed copy.

Under oath, D’Elia confirms that “[O]n 4 November 2020, under instruction and direction of US persons working from the US Embassy of Rome, undertook the operation to switch data from the US elections of 3 November 2020 from significant margin of victory for Donald Trump to Joe Biden in a number of states where Joe Biden was losing the vote totals. Defendant states he was working in the Pescara facility of Leonardo SpA and utilised military grade cyber warfare encryption capabilities to transmit switched votes via military satellite of Fusion Tower to Frankfurt Germany. The defendant swears that the data in some cases may have been switched to represent more than total voters registered. The defendant has stated he is willing to testify to all individuals switching of votes from Donald Trump to Joe Biden when he shall be in total protection for himself and his family. Defendant states he has secured in an undisclosed location the backup of the original data switched upon instruction to provide evidence at court in this matter.”

Now Obama’s former undersecretary of defence and co-conspirator in foreign election interference appears to be in handcuffs in the photo above. Same hair part, forehead, and even in the mask, it looks like our guy, no? If I’m wrong, I’ll buy him a beer and apologise.

Do you still think this is over, folks?

I personally, do not – speaking for no one but myself.

Donald Trump hit his highest approval rating on Thursday – after Wednesday’s events – while media, RINOs and Democrats attack him and begin another chorus of impeachment, which they say will begin on Monday – for an act we can prove was pre-planned by Dems.

Yes. I can prove that or I would not say it. People have finally learned to believe their own eyes and ears rather than media, which is a very good thing.

And there is a great reason for this – media have lied so much they often turn the American public to the opposite position they are trying to establish, and when they start another round of fake impeachment hearings in the morning, his popularity will soar even higher.

As example of what I’m saying, let’s start with the ‘Storming of the Capitol’ narrative on National Public Radio – before it happened

Since it has already been removed from Reddit and may be removed elsewhere by publish time, here are the words:

“So let’s ask NPR why they posted this article, Trump supporters stormed Capitol at 9:33 a.m. before Trump even began to speak at rally [hours later].

And why were Democrats advised two days earlier to expect ‘an Antifa attack’?

Yes.  That also happened, as Representative Mo Brooks announced, “Multiple Congressmen and women received an intelligence briefing that Antifa was planning to dress up like Trump supporters and attack the Capitol building.”

The world has seen the violent storming of one entrance by what we now know were Antifa infiltrators – let in by Capitol police – and we have their photos – now identified.

So, let me take this opportunity to join the Democrats in calling for their arrest and punishment to the fullest extent of law – which will never happen – as these are their own thugs, proven today when they let their own BLM pet go.

In short, Antifa and BLM were invited – by the Capitol Police – as this was nothing but a pre-planned (and pre-announced) photo op to set a false narrative against the President of the United States and his non-violent supporters.

Filmaker and author, Dinesh DiSousa posted footage of Capitol guards inviting peaceful protesters (now being described as a violent ‘mob’) into the building for the set up – and then ‘mixing’ of the two groups.

Will the media get away with it once again?

Conservatives from Brandon Straka (WalkAway) to the President and most of his fervent supporters, have been de-platformed by Tech tyrants – including us – most of whom have now moved to Parler (also including us).

Former first-person Michelle Obama has pressed for that ban to become ‘permanent’.

Apple blocked Parler apps on I-phones to prevent communications between the now 50%+ of my home nation who are with Trump, as it is outside of tyrant control.

Amazon (yet another billionaire who cares about the little guys) is kicking Parler off its servers. Expect it to be down for a week or more.

There are now rumours swirling around that the Dem-Globalists and Deep State cabal have deployed dirty bombs on American soil to cause chaos–and the 7,000 troops stationed on the streets of DC this morning with huge back-up generators appear to corroborate that the military chapter of this story has now begun.

What that means in full, I do not know.

But the Vatican’s power was cut last night, as was Pakistan’s–two alleged co-conspirators in the plot, but at present all we can confirm is that they are in the dark.

So, I can’t guarantee we will win today – or even on January 20th if they explode a dirty bomb to start another war – but yes, I can make you one promise.

I guarantee you that my fellow Americans – who are better armed than any army on earth, including that of the U.S. – will not go quietly into the night.

Then, I believe that they’ll save the rest of us – one ally at a time – because that is who they are – and that, my friends, is what they do.

I can’t speak for anyone else, but I for one am not giving up.