As first disclosed here, the Chinese Communist Party—CCP—purchased controlling interest in Dominion Voting Systems from Staples Street Capital in Canada, via UBS Bank on October 8th, 2020, less than a month before the biggest vote fraud in American history.

We showed you the SEC filings last year, so that’s not a rumour, it’s a fact that this business deal occurred.  The CCP owns controlling interest in (and over) Dominion Voting Systems and its many subsidiaries.

So Nurse Ratched doesn’t wring her hands or clutch her pearls over the CCP’s voting machine company suing us too, I’ll show you why I say that, using updated numbers from the U.S. government, while pointing no fingers:

The U.S. Census Bureau estimates there were 153.07 million registered voters in 2020 (including dead, ghost voters, non-residents, etc—and even dogs in PA)—that’s the number registered to vote last year.

Do you see a problem here?  That’s 5 million more votes than voters even including the massive fake and illegal registrations now being removed from voter rolls by the hundreds of thousands.

BUT WAIT!  THAT’S NOT WHAT THE MEDIA SAID!

The facts are quite different, aren’t they?  And it gets much worse, as not all registered voters vote, now do they?

In fact, only 66.7% of all ‘eligible’ voters actually showed up according to statista.com —which is a record in American history if true—but let’s use that number.

At a 66.7% turnout of an estimated 200 million eligible voters, that means only 133.4 million voters—including all the illegal and dead ones—cast 158.2 million ballots for president of the United States.

Friends and neighbours, that’s 25 million more votes than voters, which is why when the overpaid liars on CNN, ABC, MSNBC and NPR say “no evidence of fraud in the 2020 election”—I say, “no evidence of brains or integrity on cable and network TV”.  None.

The once apolitical Mike Lindell—recovered crack addict, who built a recovery ministry based on Christian principles and one of the most successful “Made in America” companies—My Pillow—refused to stand for such criminal interference from within or without the United States.

He spent millions hiring the top forensic experts, U.S. government ‘white hat’ hackers and proved beyond any doubt who was responsible.

He then went public with it in three films and just announced his crown jewel—a symposium inviting governments, the press, hackers and any certified pro in the field to show up August 10-12 and challenge his numbers.

Putting his name, fortune, and company at risk, Mike Lindell has done this for his country and God bless him for it.

BUT TYRANTS OF THE CCP, DNC, AND BIG TECH DO NOT ALLOW FREE SPEECH OR EVIDENCE

So, Mike Lindell—and any who allowed him a voice in the public square—were sued by the CCP’s voting machine company in American courts.

All who allowed Mike on TV (or helped tell this story)—like FOX News got sued ($1.6 billion), Rudy Giuliani ($1.3 billion), Sidney Powell ($1.3 billion) and  NewsMax (who grovelled at the CCP’s feet to get off the hook and including every chicken-stuff outlet in the nation) were silenced by China but one who stood up to them—Real America’s Voice.

Desperate to shut down these independent findings of fraud, the CCP’s Dominion also sued Mike Lindell ($1.3 billion) and his company, My Pillow (also $1.3 billion) to stifle any truth or opinion of his findings.

The CCP subsidiary’s lawyers then sent over 150 threatening letters to businesses and individuals to scare them into silence—and it worked—but not with Mike Lindell.

SO, LINDELL SUED DOMINION—FOR $2 BILLION—AND THE COURTS JUST REFUSED TO DISMISS IT, WHICH IS VERY BIG NEWS!

Those who know my work can verify that it has focused on the corruption of U.S. federal courts, so finding one that is following the law rather than the money caught me quite off guard.

The Federal District Court in Minneapolis just shut down the CCP’s effort to have Mike Lindell’s $2 billion lawsuit against their company, Dominion, dismissed.

The court is just doing its job, but I applaud them nonetheless, as that is a very rare thing today in my homeland.

On June 28th, the court ordered the case to move forward to full discovery—meaning Lindell will have access to everything—yes, everything—in any way related to Dominion’s operations which dealt with the 2020 election.

Famous tenured Harvard law professor, author and regular commentator on FOX News, Professor Alan Dershowitz, says he is confident that Mike Lindell is set to slay this Chinese dragon, while bringing the truth to light from his findings (and Dominion’s own files and communications).

But still no mention of any of this incredible story on network or cable news.

While it is likely that Mike Lindell’s suit will also expose his own party and their operatives’ participation as co-conspirators in the fraud, Professor Dershowitz, agreed to go full bore, letting the chips fall where they may.

ONLY REAL AMERICA’S VOICE ALLOWED IT

I’ve been following this case closely, but there was zero mention of Mike Lindell’s big win on June 28th in the disgraceful, cowardly American media, and Mike had to go on Steve Bannon’s Warroom shown by Real America’s Voice to even talk about it, which is disgusting.

FOX News?  Missing in action, now that Rupert’s ‘woke’ weaklings are running the show—and they’ve already been sued by CCP’s Dominion, so what the hell, children?

No wonder your rankings are tanking! No guts, no glory!  Just tell the damn news!

And good luck in your alleged switch to ‘middle of the road’ Democrats as your new audience as you claimed in the last board meeting—now that you’ve abandoned your father’s conservative principles (and his once upon a time audience).

What the Murdoch brats don’t know yet is that there is no such thing as a ‘middle of the road’ Democrat remaining in America.

They’re either road kill from trying to stay on the white line between Antifa thugs and BLM arsonists, or they’ve moved into the darkness of Marxism altogether—just ask them.

They’re either too embarrassed for what their party has become to talk about it, or emboldened in Marxism.  There is no in between.

Expectations of the Lamestream media hacks—CNN, MSNBC, NBC, ABC, NPR—name your brand, I gave up on them years ago, but I had greater expectations of NewsMax and the other few outlets trying to move up—but no—they folded like cheap tents in a cyclone.

They cowered when they were needed most.

So the time for alternatives in media has never been greater, and I thank Harry and The Richardson Post for giving us one of the few remaining places where free speech is allowed.

I see great things ahead for Harry and Nurse Ratched as the world discovers these pages—and thanks to all of you for being part of his readership family. 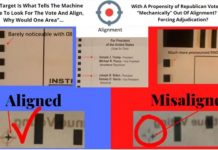 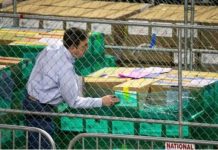 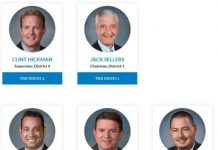 TRUTH VS. FICTION: A COMPARISON BETWEEN MARICOPA COUNTY BOARD OF SUPERVISORS’ AUDITS AND THE SENATE AUDIT – ULTIMATELY THERE’S NO COMPARISON