Billions are funnelled each year from taxpayer pockets into Marxist indoctrination centres, once known as universities—or even before that, ‘colleges’.

The few who could afford to send their progeny to mostly religious-backed institutions of ‘higher learning’, had their offspring taught the finest of Western culture, philosophy and literature, improving society in the wake of their experience.

But then along came the government—which is now suggesting that we non-Marxists—pay the $1.73 trillion in student loans these radicals owe for their indoctrination to hate and destroy us!  The answer is ‘No, Joe’. Harvard, as example, was founded by Puritan pastor, John Harvard, to train Congregational clergy, “dreading to leave an illiterate ministry to the churches, when our present ministers shall lie in the dust.”

Though sitting on a multi-billion dollar endowment fund according to its own Financial report, “Harvard must fund nearly two-thirds of its operating expenses ($5.0 billion in fiscal year 2021) from other sources, such as federal and non-federal research grants, student tuition and fees, and gifts from alumni, parents, and friends.”

And what do ‘We the People’ get for the billions lavished on these posh America-hating institutions of ‘higher learning’?

We get Harvard professors like Charles Lieber, recently found guilty of being on the take from the CCP to share sensitive research information and then lying about it (as we reported last year).

It is also a hotbed recruiting ground for not only the CCP, but the criminal element of the CIA.

It’s like they’re competing at these heavily subsidised universities as to who will win the pledge, reminiscent of fraternity rush (back when they were cool) between our enemies within and our enemies without.

“You going CIA, or CCP, man?”  “Dunno.  Waitin’ on offers, dude. Doing summer intern, like Anderson Cooper did, you know, then I’ll decide.”

Back in 2019 we revealed the (admitted) Communist Chief of Obama’s CIA, John Brennan, recruited Saikat Chakrabarti at Harvard University in 2007 to ‘update’ its allegedly shuttered ‘Mockingbird’ program. Spitting in the face of Congress—or perhaps warning them to keep quiet if they remembered the ban on such activities back in 1975 at the Church Committee hearing—CIA Chief Brennan and Chakrabarti even named the new program the same, Mockingbird.

Chakrabarti was busted admitting that the ‘Green New Deal’ (which he authored for AOC) was about taking property from Americans, not the environment—so he’s back now recruiting other Marxists for Soros.

THE TAKEOVER OF U.S. EDUCATION BEGAN AFTER WW II— WHEN MARXISM WAS DEFEATED?

Yes.  That’s factually correct.  Hitler’s National Socialist Party (Nazis), Mussolini’s Italian Marxist Party (Fascists) as well as the Soviet Union (Communist) and Mao’s CCP (Marxist) had shown the world that this ideology has no outcome but death and destruction.

But did they give up?  Of course not!

They took Marx’s 100% failed ideas, repackaged them, and began the sapping of America—the last frontier—by openly infiltrating and taking control of every government-funded university in the nation. As we’ve also covered in detail, the man who led this charge and trained up a whole generation of radicals to take over ‘the system’ was Herbert Marcuse.

Here’s where they got clever.  They couldn’t teach the same old Karl Marx crap about the ‘proletariat’ in America—who had two cars, a house and a great job—‘rising up’.

They were not going to ‘rise up against capital’.  Life was too good.

To point, that has never happened anywhere since Marx assured it would at any moment, and could not happen in my home nation, so they pivoted.

Marcuse adopted the new ‘critical theories’ approach of Jacques Derrida, Michel Foucault and other failed European Marxists who realised they could never win on ideas, so they morphed into telling their adherents to just tear it all down—and see what pops up!

And that is what they did!  Just ‘burn it down’ became their mantra.

They set race against race, sex against sex, and  every segment of society against one another relabelling this created division as ‘diversity’ and celebrating it as a strength, rather than the time bomb it’s intended to be.

Critical Race Theory, Critical Queer Theory, Gender Theory and any means by which the traditional boundaries (and nuclear family) could be blurred or blown up, has been put forth—down to kindergarten.

These ‘theories’ as propounded by the failed European Marxist retreads and their students became the radical Marxist revolution in America.

Marcuse literally taught these violent radicals—many of whom are still amongst us—how to destroy a nation and tear it down from the inside out.

SO WHAT DID THEY WANT?

I’m so glad you asked, because that’s the crazy part…..they didn’t know.

Nothing since Marx was alive has ever worked as he said, so they set their sights on destroying the one thing that had—American capitalism.

Their sole focus initially was to tear down and break apart the things that made America succeed—the nuclear family, religious faith, patriotism, fair elections, and love of nation—which implied we would fight for it.

NOTE- We don’t have that form of economics anymore—I know.  Adam Smith capitalism with a small ‘c’ has been replaced by a fascist fusion of big governments and bigger oligarchic monopolies—which appears to be their new model, or at least one the Marxist radicals now accept.

Their only goal today is to control everything and everyone—and the takeover of institutions of higher learning, the media, and now the boards of mega-oligarchic international-corps—has made that possible.

AND THE MARXISTS ARE LIVING LARGE

No more scruffy haircuts or sleeping rough for the Marxist overlords today, oh no!

The more radical their ideas of destroying America, the more money they can grift from their co-conspirators of Vanguard/BlackRock/State Street.

As example, all BLM ‘donations’ went through a Democrat Marxist front, Act Blue, where the funds were laundered over a 60 day period as we also covered.

BLM was fronted several million by Act Blue to pay for rioters, mansions and pay-offs—with the rest being funnelled to Marxist candidates of the Democrat party, as we also covered back then.

The not-so-subtle message from Oligarchs—“You are OUR army, to be ready whenever we need you,” and as we will see this summer, they are. As of June 10, 2020, Marxist BLM had received pledges of $1.678 billion from the Vanguard/BlackRock/State Street cabal, so the Oligarch funded Marxism business is good.

Got that?  1.678 BILLION from the Vanguard Oligarchs, and that was two years ago while these same Marxist BLM fools were burning down America and had 4,000 riots around the globe, sparked by a career criminal’s death [George Floyd] from a fentanyl overdose while in police custody.

And Joe Biden wants me to pay off their student loans for ‘gender studies’, ‘Critical Race Theory’ and false histories—after paying for them to learn Marxism and hatred of nation in federally-funded universities?

SO, WE TAKE THEIR BATTLE PLAN AND TURN IT AGAINST THEM

In January of 2023, Patriotic Americans will retake the nation from the CCP, W.E.F. Satanists and their puppets, and while Job #1 will be to impeach those who stole the 2020 election (and tried to steal our nation—and world) next will be a longer term plan, as the Marxists deployed, when they lost the last World War.

We will hold the public purse—and that must be utilised—but we must also rip their ideology out of every institution that violates our principles and laws.

Stop the money to any school indoctrinating hatred of America—period—and mandate that in your own nations.

Constitutionally, education is the responsibility of the States, so States must take it back, as the Feds are in violation of that power.

Dispense with the federal Department of Indoctrination (a.k.a., Dept. of Education) and stop the funding of federal grants for any ‘research’.

We don’t need to spend millions knowing if frogs high on LSD enjoy sex more or less—most college students of the 70s can answer that—or funding our enemies to explore bat caves in China and turn mammalian diseases toward homo sapiens by revising their genomes.

We’ve seen the results—like ‘gain of function’ research started in my home state of North Carolina in the 1990s with Dr. Ralph Baric—whom Dr. Anthony Fauci paid millions to develop the man-made pathogens now being plagued upon us by  the U.S. Government.

No. We are not paying off the loans of your Marxist ideologues, Joe.

No. We will not continue paying uber-rich universities to teach the spawn of the uber-rich and their ideological soulmates to hate and despise those of us who are forced to pay their way.

Telling a baker, mechanic, out-of-work pipeline worker (thanks to you) or plumber who never had such opportunities, that he or she must pay off the drinking tab/college fees for Poshies, Pommies and Commies who hate us is like throwing a glass of warm piss in our faces, Biden. 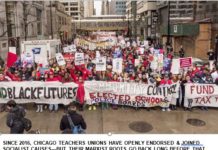