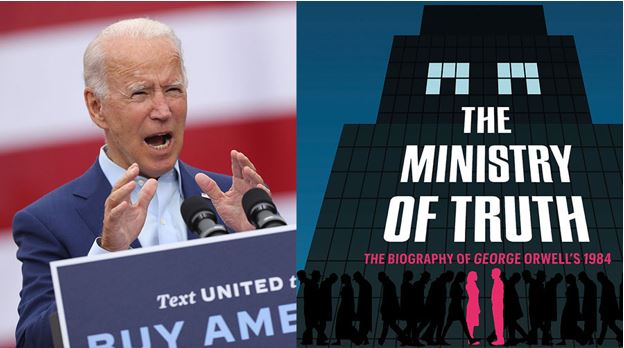 Fascism was a product of Benito Mussolini’s Italian Marxist Party, where he merged interests with Italy’s biggest businesses, giving them monopolistic control in their sectors, while making them instruments of government.

Democrats have followed his lead. Recent admissions by the Big Tech Oligarchs and evidence of their direct collusion with Joe Biden’s Bolsheviks in at least 11 federal agencies is textbook Fascism.

I put Italian Marxist Party in bold above, as the Fake Checking Mafia now likes to refer to Fascism, as a ‘right wing construct’ – as if Karl Marx were some Trumpian Conservative.

He was not.  He was a godless creature of Germany’s elite class. He got everything wrong, and is responsible for the murder/death of an estimated 143-160,000,000 souls (so far).

This bankrupt philosophy – now wholly adopted by Global elites and U.S. Democrats (taught in every publicly funded school) – destroys nations and their economies with only one ultimate result, which is death for all who oppose them.

BUT THEY’RE VERY ORGANISED ABOUT IT

Skulls go on one shelf, leg bones in another, and so on – but death it will be if you start down this path.  It’s like being a little bit pregnant with Lucifer’s child.  You either rip it out early, or the devil’s spawn will be born unto you.

The now undisputed fact that at least 45 Biden officials actively collaborated to silence conservatives and shut down truth tellers has led to lawsuits against the Biden Regime for this specific – and highly illegal – form of Fascism.

This collusion is clearly a violation of Civil Rights under ‘color of law.’ As such, it is a crime, punishable by 10 years in jail and major fines. These should apply to both the government apparatchiks of the Biden Regime, as well as their Big Biz co-conspirators (See Title 18 USC Sections 242/242).

This collusion included the suppression of medical facts about the deadly Covid jabs and therapeutics that could have saved lives. That puts both the Tech Oligarchs and their Biden Regime co-conspirators in jeopardy of prison – or execution – when America returns to a system of law, per the statute cited.

Millions of lives could have been saved had the facts about an untested poison (mislabeled as a ‘vaccine’) and suppression of highly effective non-poisonous cures such as hydroxychloroquine and Ivermectin, not been intentionally smothered and silenced by the Biden/Big Tech Fascists.

And to no one’s surprise but theirs, the court found that these monopolies have no “freewheeling First Amendment right to censor’ according to the courts.”

In his opinion, Federal Judge Andrew S. Oldham of the Fifth Circuit said the platforms argued for “a rather odd inversion of the First Amendment” that “buried somewhere in the person’s enumerated right to free speech lies a corporation’s unenumerated right to muzzle speech.”

As example, this actual headline would have changed minds about the death jabs, if it had not been suppressed by Biden’s Administration in concert with Facebook:

Dr. Anthony Fauci and his NIAID are now proven to have co-ordinated directly with the Biden Regime’s Fascist partner, Mark Zuckerberg, to shut down accounts (including my own) asking questions about this phenomenon and Big Pharma’s role in it on Facebook. These are criminal acts, under law.

As investigative journalist, Glen Greenwald, recently said of the incestuous intertwining of Big Business and Biden’s Big Government, “It’s really a merger of state and corporate power which ironically is the classic definition of fascism.”

BIG TECH – a major democrat donor class, intentionally swung the election in his favour by 17% (twitter)

BIG MEDIA – just turn on any station, and the evidence is clear that they are fascistic pr firms for the ruling junta, just as bertelsmann was for adolf hitler

BIG EDUCATION – from K1 to grad school, 95% of professors and union indoctrinators are democrat party members

Every organ of power is now either aligned with, controls, or is controlled by, this joining of monopolies and the Democrat junta.

THIS TIME, HOWEVER, IT’S GLOBAL FASCISM

When we add the fact that all these entities from media to pharma are part and parcel of the Vanguard/BlackRock/State Street cabal – this time it is global fascism the Dem/Marxists and their Globalist allies seek.

This time, they want it all.

There is not a page big enough to show all the components of the Vanguard/BlackRock/State Street cabal, so here is just the media slice – all owned and controlled by a tiny group of Oligarchs – all with Marxist/Globalist intent.

ARE THESE OLIGARCHS REALLY ALL COMMUNISTS & FASCISTS?

They simply know that in order to control everything, they have to take our rights, liberties, means of defence and property first and Marxism is the go-to solution.

Let’s take Mussolini – Fascism’s founder – and track how he came to this conclusion as the answer to his dilemma.

After fighting in World War I, Mussolini realised that the millions dying on the battlefield were not sacrificing their lives for any ideology, but for their nations.

Marx was wrong about the masses rising up – it never happened – so both Hitler and Mussolini came to the idea of using pride in the nation as the basis for their new Marxism, for which men would willingly give their life. In order to do this, they decided to bring in the most powerful industrial giants to partner with them, instead of the masses.

As detailed in Hell’s Cartel, by Jeffrey Diarmuid, all of Germany’s top industrial companies chose monopoly and Hell, without exception.

Both Mussolini and Hitler assumed (correctly) that if offered a monopoly in their field and guaranteed riches from government, major industrialists wouldn’t care in what form of governance the deal was packaged.

Who would be so wicked, you ask?   It’s more like who would not.

The Democrat Party in America – like Hitler’s National Socialist Party in Germany – has carefully merged interests with Bank of America, Google, Morgan-Chase, Ford Motor Company (like Uncle Adolf), IBM, Facebook, Twitter and their chief Fascist partners of late – The Vanguard owned Pharma industry, which includes all of the jab makers.

Yes, all of them are owned by the same small group of Oligarchs.  Competition in each of these industries is just an illusion.

These mega corps and monopolies now write all Democrat legislation that affects them with passage a foregone conclusion, as this new Uniparty of Fascism includes RINOs (Republicans in Name Only) on the payroll from these same partnered interests.

THE ONLY QUESTION REMAINING IS HOW DO WE BEAT THEM – OR CAN WE?

Mussolini and his government thugs were brought to justice by the ‘deplorables’ of Italy (our brethren) as seen above, while the fascist copy-cat, Adolf Hitler, robbed the German people of such satisfaction by offing himself with a pistol.

Mussolini was captured at the Swiss border with his mistress, shot, and returned to hang upside down at a service station in Piazzale Loreto outside Milan.

And what of his Fascist partners, or those of copycat Adolf Hitler?

Not a one of them paid any price, which must change when the Democrat Fascists and Big Biz/Marxist government patsies worldwide eventually face the music.

The Democrat’s co-conspirators of Big Media told lie after lie to destroy Trump and his presidency (Russia, Russia Hoax, Ukraine Impeachment Hoax I, Mueller Hoax, Impeachment Hoax II) – you get the point – and all of them must suffer.

Their Fascist co-conspirators of Big Pharma and government partners who created and staged the manmade coronavirus with the CCP to use mail-in ballots and rig the 2020 election – blaming it on their created Scamdemic – well, just hanging them upside down dead for a few days may not be enough on that score.

Big Banks and Wall Street co-fascists who continue to fund America’s main enemy (and Fauci’s Scamdemic partner), Communist China with trillions of U.S. pensioner and even government retirement funds to destroy America – all of this must stop now!

Larry Fink and BlackRock Democrat Party co-conspirators must pay the ultimate penalty for their treason to not only the United States, but all nations.

And the Democrat Party’s incestuous fascist relationship to the Vanguard/BlackRock/State Street cabal (of which Fink is head muckety-muck) – now owning most of our world – has been given control over the Democrat’s every move, piece of legislation and foreign policy, all of which must be retaken by We the People.

All of these too-big-to exists monopolies, must be broken into thousands of pieces once we retake our societies and nations, while defunding the Marxist-indoctrination centers, once known as public schools and universities.

And don’t forget the Democrat merger with professional monopolies like the Bar Association, which tried to disbar any attorney willing to work with President Trump, or the medical monopoly, still de-licencing any doctor who speaks truth about the Fascist’s death jab, or suppressed therapeutics that actually work.

The power to give a licence – or to take it away ending someone’s career – has no place being vested in the hands of private professional monopolies.

Unaccountable private political partisans must not be allowed such awesome powers and positions.  If necessary at all, that should be a duty of government.

To make the point, let’s ask which organisations pushed and illegally threatened (or took away) the careers of doctors and nurses who spoke truth?  It was the AMA (American Medical Association).

Which organisations used the threat – and are still using the threat – of taking away the livelihood of any attorneys willing to follow their own Code of Professional Responsibility and aid President Trump against attacks by the Fascists?

Answer? The Democrat-run law fare monopolies, a.k.a. Bar Associations, are doing so, even though their own code forbids it.

UNDERSTAND WHAT THEY ARE DOING

The Democrat Fascists’ bible is Rules for Radicals, for our new readers.  It was written by U.S. Communist/Fascist, Saul Alinsky, and guides every move made by that party and its operatives to this day.

He and his disciples are demonic.  I contend that this is not just name calling, as Alinsky dedicated his tome to Lucifer – the father of lies.

“Lest we forget at least an over-the-shoulder acknowledgment to the very first radical: from all our legends, mythology, and history (and who is to know where mythology leaves off and history begins – or which is which), the first radical known to man who rebelled against the establishment and did it so effectively that he at least won his own kingdom – Lucifer.”

Alinsky’s 13 ‘rules’ can be seen here

One of his favorite tactics was accusing opponents of what his side is doing.

As example, the word ‘fascist’ had all but left the lexicon – until the Democrats began employing that tactic against the party once considered the business world’s ally – the Republicans.

The Democrats abandoned the workers (masses) just like Mussolini and Hitler, once they realised co-opting the rich and powerful was a far better, quicker – and more profitable – way to achieve their goal of total control.

Once fully the party of actual Fascism, they started calling Trump and his supporters – guess what?

See how this works?

So yes, we can break apart the Fascism now rampant in our Western-aligned nations.  The question is, do we have the courage and will to do it?

The first step is calling out the name-callers for who and what they are – Fascists – by knowing its history and telling any who will listen just who are the real ones. 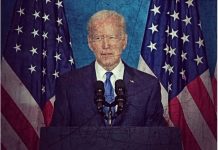