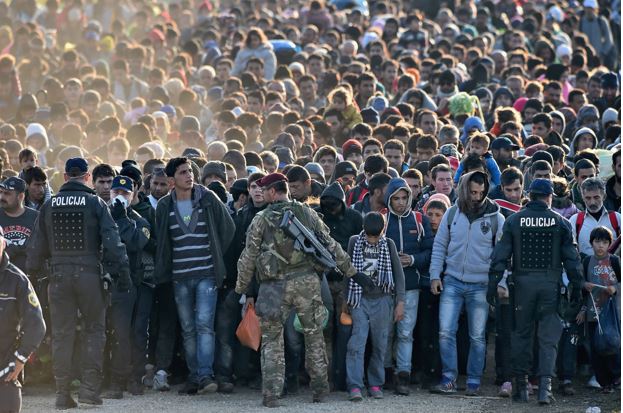 WAS THIS PART OF THE GLOBALISTS’ PLAN TO DESTROY WESTERN CIVILISATION?

In retrospect, only a fool (or a traitor) would invite millions of young soldiers whose political ideology requires “death to all Christians, Jews and Kuffar [non-believers]” into Christian nations, but hindsight won’t help us now.  They’re here.

The only good news is that the Ship of Fools running Europe into the ground over Greenie fairy dust and unicorn energy policies, have sparked a revolt of reason.

Sensible leaders who intend to reverse energy policies which mathematically  cannot work, or put a stop to the flood of those sworn to kill us and our culture(s) are turfing out the demon-inspired Fairy Dust crowd, nation by nation.

The bad news—or among the bad news, I should say—is that when all of Brussels’ imported people of the sand start freezing and starving in about three weeks, their ideological bent toward violence will manifest in the first wave of riots, looting and worse.

I’m typing this in a hotel room near the German border—between bouts of warming my hands with breath—wrapped in sweater and shawl, as the ‘turn off the heat’ policy kicks in in all public buildings, and it’s just the second day of fall, so we may not even have three weeks before it starts.

For the people of the sand, killing, raping, stealing and desecrating Christian and Jewish holy places (and people) are stair steps to glory—as long as they are carried out against those not agreeing with their genocidal political ideology.

Many of these same well-trained killers were then imported by the Brussels meatheads (after Trump ran them out of Syria) under the misnomer of ‘refugee’.

They were welcomed with open arms, free housing, money, and all the girls they cared to rape while the authorities of most EU nations looked the other way.

Take Sweden, for example—which is only now taking a step back from the edge of insanity with last week’s election—rapes jumped 1,100% shortly after the arrival of the first wave of ‘refugees’ fresh off the battlefield still smelling of sex slave.

France and Germany—plus many other nations run by fools—have already instituted policies of limiting heat to just nineteen degrees this winter rather than fixing the problem that caused it—Greenie energy and their war against Russia.

Food is already in short supply in some nations, and only because the United Nations is shipping 95.5% of Ukraine grain supplies to the EU (instead of ‘the poor’, as they claimed) will Europe have bread this winter.

121 ships left Odessa, Ukraine this week, as example, loaded with grain, and all but four of them headed for EU ports.

Who owns most of this grain?  International American owned commodity and agriculture companies who bought up Ukrainian soil under the Obama/Biden administration after they overthrew the duly elected government of President Yanukovych own most of it.

Those still under the misperception that the United Nations gives a whit about poor folk have not been paying attention.  They’re the same reprobates over the W.H.O. who just tried to kill us with their ‘vaccines’, so please wake up.  It’s about money and power, only.

They knowingly killed our kids and future with this dangerous poison, so they’re certainly not above starving and freezing us to death.

IS THIS WHY THEY BROUGHT IN THE JIHADISTS?

I can’t prove or disprove the ultimate intent of the Global Marxists, but it certainly was not to “Make Europe Great Again” to borrow the President’s MAGA phrase.

But we now know their Coronavirus was plotted and planned over a 20 year period, so let’s start there.

Then, their so-called ‘vaccine’—sworn by Globalist-aligned governments and health officials to be ‘safe and effective’ (though untested)—turns out to be far deadlier than the bug they produced, killing more and more over time.

When ‘all cause deaths’ amongst our healthiest age group jumps by 84% just one year after their forced injection, the cabal’s intent is clear.

Next up is a war provoked by the U.S. and NATO in Ukraine, plotted and carried out since 1992 when those parties swore to never encroach on Russia’s borders, which perhaps was my government’s biggest lie ever—and that’s saying something.

NATO and U.S. funded Neo Nazis surround Russia, and they now admittedly ringed it with illegal bioweapons labs—all but three of which the Russians have captured.

The plot now leads to the Fourth Horseman of the Apocalypse part, where Marxist adherents took us into Greenie Fairy Land as they killed off real energy, making Europe and England dependent on Russia to keep their economies and people working—then provided weaponry and soldiers to attack their supplier—Russia.

All opinions about Russia or Vladimir Putin aside, that series of events cannot be accidental. It’s like loading a revolver with a shell in every chamber, then proposing to play Russian Roulette—and volunteering to go first!

Europe is in a recession (quickly turning into a depression) and industries are collapsing, because their is already an energy crisis that will not allow them to manufacture or keep warm.

A simple thing like precision ball bearings—most of which come from Germany—are already in short supply as a result, shutting down other companies worldwide.

The euro is in freefall, hitting its lowest evaluation in 20 years, and there is no way to take advantage of that economically by selling abroad when the factories are shuttered for lack of energy.

This abject and intentional stupidity is causing a global collapse by design.

As the heat goes off in the capitols of Europe later this month and more and more factories close because they can’t get (or afford) energy, jobs close as well.

Jobless, hungry, freezing people are generally not happy campers—so the jihadists living for free off EU nations may have some company then they hit the streets from the working class when the uprisings begin in earnest.

LET’S END WITH SOME HOPE

Last night at a meeting in Poznań, Poland, a Greenie with whom I’ve had numerous ‘conversations’, admitted that this forcing of undependable energy on industrialised nations was a very dangerous and poorly thought out idea.

In fact, it is getting very hard to find a Greenie now to argue with as Europe heads into a brutal winter—my assumption—based on it being the coldest summer since I’ve lived here, with only two days in the mid 30s.

Heads of state are rapidly reversing course as they feel the outrage and anger.

The Dutch Marxist Minister trying to steal the farmers land was forced to resign and the EU’s unscientific claim that nitrogen (74.04% of the air we breathe) is the reason to shut down food production is being challenged with the fervor of an old time duel—and they are now in retreat.

Protests across Europe have forced governments to end stupid mandates as the effects of their poison are coming to fore.

Such headlines as this one yesterday give hope: “EU forced to begin Europe-wide Investigation into 700% to 1600% increase in Excess Deaths among Children since EMA approved COVID Vaccine for Kids.”

Even Klaus Schwab’s Marxist boy-toy in Canada, ‘Jussie’ Trudeau, has capitulated and withdrawn the illegal mandates that sparked Truckers’ protest this year, not only in Canada, but across the world.

So while one can never trust people of the sand whose ideology specifically allows deception when dealing with ‘us’ to gain a foothold until they can take over, they may prove to be useful idiots in days to come as frontline of the revolt.

Then, it’s time to send them back to the deserts from whence they came, before they reach their stated goal—which has always been to convert or kill ‘us’.

Cleric Anjem Choudary wasn’t kidding, so let’s get rid of them first.