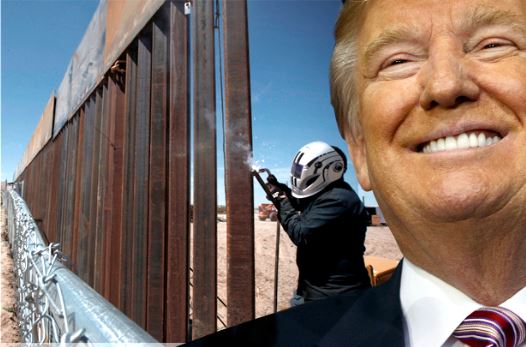 In my home nation of America there is some reason for hope. An amazing outlier, Donald Trump, won an election that every major pundit worldwide called wrong. How did they miss so badly? Because they failed to see what most of us do—that we’ve been abandoned by our Governments. They serve Globalist masters and their own interests, rather than we the people who pay their wages and do most of the living, working and dying in our once-proud nations, which we still love.

President Trump is working desperately against his opponents, the Democrat Socialists, as well as a notoriously vicious press, and even Globalist members of his own Republican Party to stop the efforts to liquidate and expunge Western Civilisation.

America will survive if Trump can use his immense will to close the door on the invaders with a border wall and by changing stupid laws that lure those seeking a hand-out rather than legally seeking opportunity—the latter always being welcome.

But now let’s turn our focus to Europe, the United Kingdom, Australia, New Zealand and other pieces of what we once proudly knew as our great heritage of Western Civilisation.

Europe only began to wake up after the Brexit vote and several nations in their ranks chose new leaders proud of their nations rather than apologists, who refused to abandon hope and their own cultures, but others have not and it’s simply too late. Take as example, France, Belgium, much of Germany and Spain. Your leaders were bought off, they are stupid, most are corrupt, or they have been noxiously blinded by liberal fairies and gremlins, promising that good will somehow come from evil. It will not. Your freedom and heritage will be drowned out by a medieval ideology of world rule through genocide that has never produced anything but death and destruction. More new book titles were published in Spain in one year than under Islam in the past 1,000 years. Is that what you want for your nation—the 21st century Dark Ages?

We must ask all of these political hacks and media nit-wits promoting such nonsensical tropes as “Diversity is our strength” who invite more and more impossible-to-assimilate aliens from foreign worlds a few hard questions. Is it really worth it to sell out your own people and culture, just so you can buy a second home or be invited to elite cocktail parties today, when your daughter will one day be a slave in a burka and your wine bar closed as a violation of Sharia law—or you are stoned for having an evening cocktail? Do you actually know what you have invited into your nation?

Have even one of you read the Quran? I think not or you would not offer such stupid words as colloquy to appease those who intend to murder you. You speak and preach of that which you do not know, as is your trademark, but I beg you to learn, because your stupidity and ignorance endangers the rest of us and the Civilised World itself.

It’s not just a difference of culture, Jacinda. They plan to kill and enslave your people

And it’s not our culture, Jacinda—it is its antithesis. It’s time to send ideological murderers back home before it is too late for Western Civilisation. So do not placate them or invite more. It’s already too late for France and Belgium, and maybe even Germany. Some outposts may yet be saved, but not with self-destructive impotents and apologists such as yourself, running most nations of our Western Civilisation.

Anticipating universal criticism by the chatting/non-thinking class for my calling these terrorist “jihadists” instead of ‘asylum-seekers’, I do so for two reasons: 1) first of all, the Quran requires them to be jihadists or they cannot be Muslim. Mohammed ordered that anyone claiming to be a Muslim who refuses to kill for Islam, should be “murdered or crucified or their hands and their feet should be cut off on opposite sides.” This should be done by their own Muslim neighbours. [Quran 5:33]. So until I see some one-handed, one footed folks out of the millions now roaming freely across our European continent, I will continue calling all Muslims jihadists–because Mohammed required them to be jihadists or they could not be considered Muslims. 2) Muslim immigrants have proven themselves to be jihadists on many occasions now, removing any doubt in my mind, and we haven’t gotten to the part where they openly attempt to take us over.

Sweden recently broke ranks with the EU hush mandate and admitted rapes have risen “by 1300% since 2014.”  What changed? Hordes of Soros-backed jihadists were granted asylum in Sweden. That’s all that changed. Not only is rape of a non-Muslim woman not a crime under Sharia, it is encouraged, so get used to it. Mohammed did it all the time. Read the Quran and Hadith and quit being so supportive of ‘their ways’.

WHITE AMERICANS ARE ALL TERRORISTS

THE MASK HAS SLIPPED: AUSTRALIA IS NOT RICH AND FREE