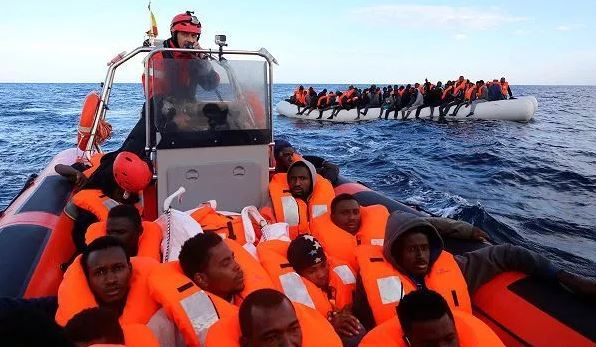 Last week was spent investigating multiple ports on the coast of Southern Sicily and areas between them where tens of thousands of muslim jihadist were flooding Europe from Africa as recently as one year ago.

I am pleased to report that the deluge has been brought to a trickle.  In fact, we only saw two small rowboats coming in from the direction of nearby Tunis.

Unfortunately, we could not get close enough to verify whether they were invaders or just overloaded locals.

Italian Coast Guard pilot “Toto” told me in the interview that this past year has seen the rate plummet “to its lowest level in 15 years.”

Why?  Sensible policies and strong leadership—the two missing ingredients in most Western nations—that’s why.

Italian Interior Minister, Matteo Salvini, has taken down the welcome signs and is deporting any and all jihadists for the least infraction. I did not even see a burka or hijab on the Southern coast.

“The two leaders discussed how to forge a common European pact to combat migration on the continent and succeed in the European elections [coming up this month],” according to La Stampa.

Hungarian Prime Minister, Viktor Orban, is also not playing games. His government built a barrier wall on the Serbian border to prevent more invaders from employing ISIS routes though his nation to flood Europe with African muslim jihadists.

These two courageous leaders’ plan for their alliance—after May 23rd EU Elections—is to be the largest in the European Parliament and use that power against the Progressive Socialists and One World Gangsters who are attempting to extinguish Western Civilisation.

Too harsh? I don’t think so. For those who know the truth about the political ideology known as Islam, I can tell you these medieval miscreants aren’t even trying to hide who and what they are anymore.

Trained to murder from birth

On “Ummah Day”, the Muslim American Society of Philadelphia in the United States—yes, the U.S. “City of Brotherly Love”—put on a show of their baby jihadists singing in soprano, “We will Sacrifice Ourselves for Al-Aqsa [the temple in Jerusalem].

We will chop off Their Heads, Subject them to Eternal Torture.” Catchy little kids’ rap, eh? Go see it for yourself on Twitter @MEMRIReports. This is your grandchild’s kindergarten in 20 years if we don’t force out Liberal stupidity and get with the program.

Allowing this terrorist training group, MAS, to operate openly in the United States is a crime against the American people in and of itself—and there are 42 of these centres now indoctrinating jihadist youth across that nation.