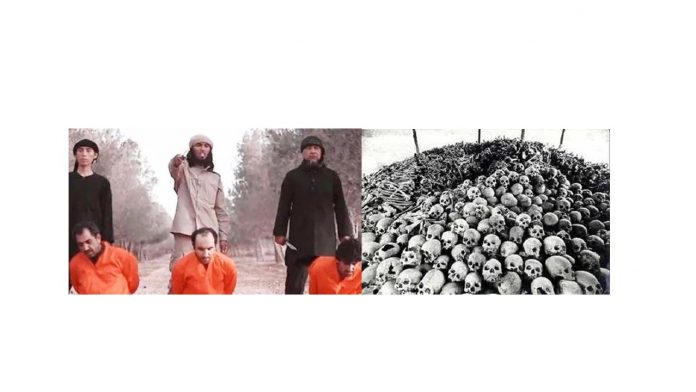 The extraordinary advances in mankind’s fortunes, health, and happiness came about through open commerce and man’s freedom to seek his own way.

As F.A. Hayek so wisely wrote in The Road to Serfdom, “The conscious realisation that the spontaneous and uncontrolled efforts of individuals were capable of producing a complex order of economic activities could come only after this development [political freedom] had made some progress.”

The incredible economic results in such a short space of time, Hayek opined, was “the undesigned and unforeseen by-product of political freedom.”

The mistake made by Western heads of government for most of this past century (and today)—we’ll call it Dragon One—is the outrageous assumption that the individualist tradition which created the most extraordinary advances in mankind’s history, could be wholly abandoned and ‘progress’ would somehow continue unabated.

That’s like using the gas engine to get you where you wanted to be and then trying to run it on water. Guess what happens?

Running out of Fuel

The fuel that has lifted every society out of poverty within 100 years of trying it—complete political freedom—is what led to the risk-taking and successes of science, unparalleled wealth creation and even the release of the human spirit and its potential, as described by de Tocqueville about young America.

The incredible ‘can do’ attitude inspired and engendered by political freedom becomes a self-fulfilling prophecy.

Switching to the water of bureaucratic ham-stringing societal controls at every level, and attempts to structure society by any other means than “spontaneous and uncontrolled efforts of individuals”—saps that spirit with every government interference in our lives. It not only stops the engine, it destroys it.

The Risks of Radical Islam

Enter dragon Number Two. Not satisfied with destroying the engine of progress and turning us away from its benefits, these treacherous Leftist Western leaders began importing savage medievalists whose sole mission is to destroy the engine, its makers, its users and any who know how the damn things work.
This braindead child of sickeningly weak and pathetic leaders is the larger, more dangerous dragon and it will destroy the magic that created Western Civilisation in short order—unless stopped quite soon.

So, we can’t let a little good news make us complacent even for a moment. The stakes are too great—but many in Western World leadership are waking up and smelling the coffee with us.

It’s not only Trump, Salvini and Orban, but Nigel Farage taking Britain back by storm with his new Brexit Party, and Marine Le Pen challenging the cowardly Macron with real prospects of winning after he has destroyed France.

Geert Wilders’ Dutch anti-Islam Party for Freedom is fighting back against jihad importers; and Tomio Okamura in Czech Republic is following suit; while Austria’s Sebastian Kurz, head of the Coalition Government, has closed 7 mosques and charged 60 Imams with fomenting terrorism as well as banning foreign funding of Islam.

Even Jimmie Akesson’s new party, Sweden Democrats, is jumping in the polls by standing against immigration, while Denmark’s Social Democrats have broken with the Social Liberals and aligned with Danish People’s Party to stop immigration and start deportation.

And alas, even Germany is finally heeding the warnings. The Alternative for Germany Party now holds a lead in that nation’s eastern States over Commie Queen of EU politics, Angela Merkel, and her Christian Dems—something unthinkable just 18 months ago.

The West no Longer the Best

The nation where I live does not allow these people at all, so we’re in good hands in Poland.

MP Dominik Tarczynski schooling British News Chick, Cathy Newman. “Zero! We will take none of them. Not one muslim will we take. That is why Poland is so safe.”

So stay vigilant, speak up proudly and loudly until we take back our nations from the Leftists, and fight the forces of Darkness who openly call for our murder, at every turn and by every means.

Dragon One can be voted out. Dragon Two, on the other hand, must be returned to the Darkness from which it came—or battled in the end. Now is the time to decide.

Howell’s new novel, The Lawyers Guild, is available on Amazon along with his non-fiction books on freedom and its history. Order today!