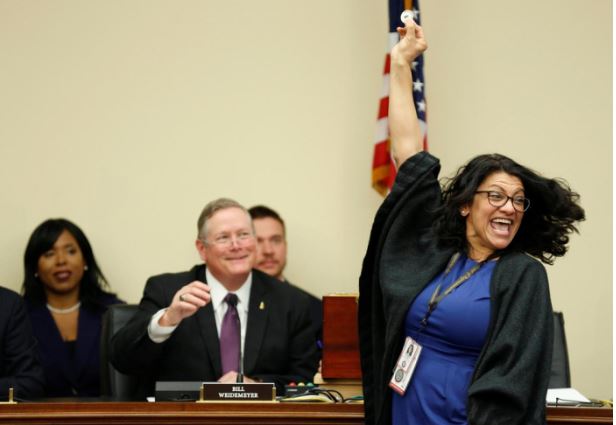 An incomprehensible crime against my nation’s Constitution was committed by former U.S. President Barack Hussein Obama.

We’ll deal with that crime after the Inspector General’s report and indictments of Obama officials start to roll.

I’m talking about Obama ordering selected voting districts to be flooded with Muslim jihadists and their sex slaves from war zones to get some of his own kind in power before we finally saw the back of him.

70,000+ Somali jihadists were dumped In Minnesota’s 5th District by Obama. Ilhan Omar, (who married her brother to fraudulently qualify as a ‘family’—no I’m not joking) was elected to Congress pushing a “Palestinian State” and anything else that might harm America or Israel.

Obama also flooded nearby Michigan’s 13th District with Muslim ‘refugees’ and Rashida Tlaib, from the mythical nation of ‘Palestine’, is also now in Congress pushing—well—a “Palestinian State” and anything that might harm America or Israel.

So, let me deal with the ‘sex slave’ part above before Jacinda’s hate mail or her thought police start in on me.

He said that his men could sink their Willies in any orifice they wanted, anytime they wanted, per Big Mo himself. If they refuse, they are to be buried to the waist and stoned. How’s that for ‘woke’, Jacinda?

Don’t like Mo’s policies? Take it up with your new imam, Jacinda, not me. I’m just a guy from a Christian nation disgusted by them and by you for taking their side. Lose soon, please, Jacinda.

Now, back to my nation’s Islamist sex-slaves—Ilhan Omar and Rashida Tlaib—these two Congressmuzzies now claim the land between the Jordan River and Mediterranean to be some ancient homeland of a people called “Palestinians.”

They make this claim, knowing that the extraordinarily complicit/compliant wing of Left-wing parties (formerly known as “The Press”) will parrot their nonsense without a single checking of fact, and even promote the impossible narrative.

CNN did just that this week, by the way. It announced the ‘Bedouin fairy tale’ of these girls to the world. They even included Tlaib’s dumber-than-dumb statement that her “Palestinian ancestors created a safe-haven for the Jews after the Holocaust.”

Not a single MSM talking head has challenged this fantasy or laughed at it as they should. That name—Palestinian—was not used dating back at least four millennia until the separation after the 1936-1939 war between Jews and Arabs living in a region by that name.

Damn clever trick by the muzzies to try and lay claim to Jewish lands, but bullshit, nonetheless.

To put this into perspective, it would be as if the Kurds were pushed into the Syrian Desert by the Turks and Iraqis because they were not wanted. One day, the Kurds simply claim the land, which belongs to another nation as theirs and call themselves Saharians.

Immediately, they get fawning support from the press, UN, and the rest of the Marxist Left— provided they hate America and Israel which the Muzzie gang qualifies for in full measure.

Congressmuslim Rashida Tlaib’s ‘ancestry’ is actually ‘unwanted Jordanian muslim sand gypsy’—not the name of the region they invaded when their own nations did not want them.

For her to say that hardcore Bedouin gypsy Jew killers were simultaneously creating a ‘safe haven’ for them is beyond ludicrous, but remains unquestioned by CNN. No wonder their ratings dropped another 26% last week alone.

The culture of the people known as Jews today began around 1200 BC in the hill country of Canaan from the merging of existing Phillistine/ Canannite cultures.

There was no such thing as anyone calling themselves Palestinian or Muslim for that matter. The world had been spared of both as yet.

Sacked by Egyptians, Assyrians, Babylonians, Persians—even Macedonians under Alexander the Great—the Greeks, the Romans, Byzantines, then initial Muzzies due to some wet dream of their prophet about a mosque there and Jesus’ mother Mary, then the Crusaders, back to Egyptians (who had been forced from Christianity to Islam by then), then by Turkey (also converted from Christianity at the point of a sword) and back and forth until the British took it over in 1917 after defeating the Ottoman Turks in WWI. Whew!

The State of Israel. Tough neighborhood, eh? But that is why the Jewish people and their culture are intact today. They are survivors who keep who and what they are alive, even under the most extraordinary of circumstances.

So, the next time you hear someone talking about the nation of Palestine, ask them to show it to you on a map.

The place to which they will point is the white part that says “Israel” above, and you should be damn glad of it, as those with whom we share our Judeo-Christian heritage are all that is keeping the region and these would-be-killers in check.

I get some nasty hate mail from Anti-Semites which I don’t really understand, because I only advocate for human freedom and against any ideology that subjugates, so I always respond that their energies might be better exercised on those whose ideology demands their death or loss of freedom, instead of those with whom we share a religious and cultural heritage.

Moses gave us the Ten Commandments, including “Thou shalt not kill.” Jesus told us to love one another, without exception. Can you imagine a Jew or Christian saying that about Muslims, “Readers of the word [Christians and Jews] should be murdered or crucified or their hands and their feet should be cut off on opposite sides or they should be imprisoned”? [Quran 5:33]

No. Of course, you can’t imagine any Christian or Jew—or Buddhist, Hindu, Zoroastrian, Bahai, or any other ‘religion’ for that matter, saying such horrid things, can you?

Islam is a political ideology seeking global control through genocide and slavery—not a religion. Big Mo demanded it until we’re all dead.

He was an illiterate goat herder, by the way, which is why he called Hebrews and Christians ‘Readers of the Word,’ and alleges to have admitted his illiteracy to the angel Gabrielle when told to read a script from Allah.

Mo couldn’t, which puts his whole story in question. If the real God—our God—wanted you, me, or Mo to know something, it could be in any language or none and we’d get it. Perhaps “Allah”, the ancient Arabian Moon-god of darkness, wants ignorant prophets, but ours does not.

Speaking of prophets, any who have not yet read Harry Richardson’s “The Story of Mohammed: Islam unveiled,” should do so now and you will see why it is so important that this disease be returned to its host nations rather than spread by illiterates at the pinnacles of our dysfunctional governments who apparently can’t read either.

The weaker and less prepared will die when the Muslims rise up against you to establish Sharia. Your stupidity and service to them will not matter. You will die. Unfortunately for your nation, Jacinda, it is you and other Liberals who suckle this peril, and history will scorn you for it.