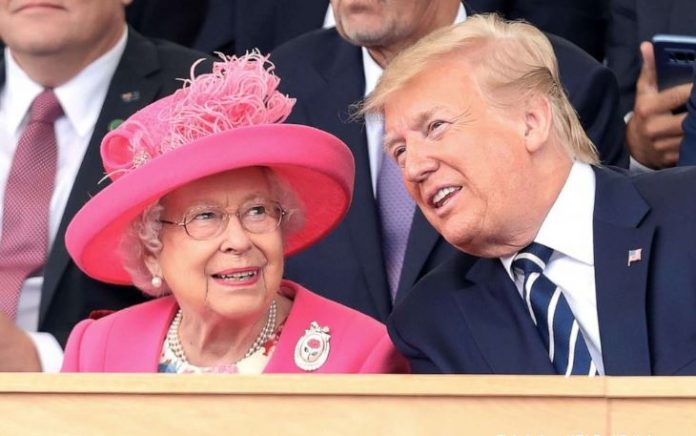 Aside from minor unpleasantness in 1776 and 1812, England and America have been fast friends. The Queen will keep it that way!

And here is why Her Majesty will ignore the self-appointed ‘Elites’ even in her own family and the scuzzmongers in her Parliament to make sure that she and her new friend, Donald J. Trump, remain close friends and allies.

The mainstream press in my home nation and much of the world contracted the most severe of mental illnesses, collectively, on the evening of November 8th, 2016.


Known as Trump Derangement Syndrome (TDS), there is no known cure and the ending is sad—mumbling to unseen spectres with a complete loss of journalistic integrity, punctuated by severe lying and complete lack of honest perspective.

Imagine, as example, seeing thousands upon thousands of British citizens waving flags and signs welcoming Trump as a hero shouting, “We love you, Mr. President,” but posting your network’s young talking head in an empty park– a commute away, mind you–who claims that no one in England wants the Leader of the Free World there at all. But thanks to the internet, someone in the actual crowd shows what really went down on June 4th and CNN is caught in yet another lie.

Now imagine for a moment that you are the monarch of this ancient island kingdom.

You were a young lady when the witless Neville Chamberlain let the National Socialists run riot over Europe and attempt to flatten your timeless cities and culture–but thanks to your American friends (and Polish pilots who “saved London”)–you survived . Your allies came to your rescue.

Soon after that horrible war, the crown and throne became yours, but as a rather powerless monarch, you were shocked to see that which your nation barely defeated in World War II –socialism–was being espoused in Parliament by its Labour Party.

There was little you could do but watch the socialist forces dismantle what was once the greatest manufacturing and trading nation on earth, but this time, the vile forces were from within rather than without.

You had to quietly watch your own nation’s politicians put your empire on the same destructive path toward the socialist horrors that almost befell you when you were a young princess.

But once again,your nation is saved from socialism and your own form of Nazism by a modest woman named Margaret Thatcher who is heavily under the influence of her American partner and hero, President Ronald Reagan.

Those were her own words.  I heard them. I was at her tribute to President Reagan in Washington, DC back in 2002.

Mrs. Thatcher ended her incredible tribute to “my friend Ronnie” (again her words) quoting, ‘Eternal spirit of the chainless mind! Brightest in Dungeons, Liberty! Thou art, For there thy habitation is the heart – The heart which love of thee alone can bind; And when thy sons to fetters are consigned – To fetters, and the damp vault’s dayless gloom, Their country conquers with their martyrdom, And Freedom’s fame finds wings on every wind’

Together, they faced down the greatest threat to freedom on earth–the Soviet Socialist State

But tragically, under the influence of globalist/socialists wanting to accomplish what Hitler and other evil forces failed to do, your kingdom–and even its currency– are undermined by a new breed of devils seeking to put your empire under bondage to foreign aristocrats, many of whom your ancestors fought throughout history.

Parliament actually votes to subdue your empire to the whims of a European Union comprised of effetes and elites. Your people, being more astute than their leaders, vote to leave this ‘union’–but they are ignored time and again by those they elected.

Saved – just in the nick of time

Under the grip of corossive Global/Socialists, your empire is subjugated to an odd collection of Brussels-based wimps, funded and backed by One World gangsters.

You watch in horror as American leaders fall prey to the same ‘Elitist’ spell (and money), one by bloody one. The new European Union begins flooding your islands with beggars and those who wish you harm–and there is nothing you can do to stop it or even stem the tide of the invaders. One of them even becomes the mayor of London, reducing the pride of the Western World to a crime-ridden collective of foreign enclaves where even Bobbies fear to tread.

These invaders and hapless politicians nearly wipe out what it once meant to be British, supplanting it with strange ideologies and people sworn to your destruction. As the monarch of your empire, you realise that both it and its culture will soon be submerged. You see that the Globalist cabal is bent on expunging Western Civilisation itself. You worry desperately for your nation and its people.

Then–just at the darkest hour–a hero emerges in the West. Like most heros of old, from Ajax and Achilles of ancient mythology to the man who saved Europe in World War II, General George Patton, heros are rarely as Hollywood would like. They tend to be strange loners or outsiders, often misunderstood, refusing to live by the norms of their failed societies–but without them, history would be different and far worse.

The Queen sees a glimmer of hope to save her nation from destruction and disaster while she still can while the weaklings in power continue pandering to outsiders.

This hero she sees on the horizon, brandishing only direct words to encourage the downtrodden masses who have been so abused by the self-appointed Elites, fosters something unknown for many years–HOPE–real hope, not the fake promise of it.  The kind of HOPE that restores markets, commerce, jobs, pride in nation and culture. This man single-handedly drives racial economic disparity to its lowest levels ever in his own country and begins to inspire other leaders to follow his incredible example.

His miraculous message is also simple–limit government and expand freedom–as he slashes regulations and taxes. By freeing the human spirit, he tells the people that the rest will take care of itself–and it does. Just by trusting the people to know better than unelected bureaucrats and pathetic milksop weaklings in legislatures what is good for them, an economic miracle unfolds.

Could this miracle worker be the one sent to start the Spring and renewal of all of Western Civilisation itself?

The Queen wisely sees that the only hope for her Empire is to assert royal privilege. She must align with this allegedly inimical hero or perish. The so-called ‘Elites’ be damned. The hero is invited to her castle, and then treated as the Champion he is.

The proof is in the plum pudding

My mother was a royal watcher of note, from the queen’s coronation to the end of her life. I was forced to watch any royal event from the black and white footage of my youth and Saturday movie reels to digital technicolor, and I never once saw that Stoic royal face crack into a broad school-girl smile until Queen Elizabeth greeted President Donald J. Trump at her home, Windsor Castle, this week.

Her Royal Highness absolutely beamed at this commoner, much as the snobbish Viennese Royals likely did in 1683 when the (elected) Polish King, Jana III Sobieski, saved their royal asses from certain slaughter by the muslim hordes of Mustafa.

“But he’s not one of us!,” a king haughtily muttered to the council of royals (then under siege behind the castle walls) just as the queen’s advisors no doubt did as well.

The priest, Marco D’Aviano, who sent word to Sobieski begging for his help to save Europe and Christianity responded, “You are correct. He is not one of you. And that is why he may be able to save us.”

Mustafa’s murderous muslim horde outnumbered the Polish King’s Christian hussars and Polish foot soldiers three to one, but Sobieski routed them in one morning so thoroughly after weeks of siege, that Mustafa ran away with but one shoe.

And today, Trump, the one the ‘Elites’ again despise as not being ‘one of them,’ will save from tyranny those of us who do most of the living, working, and dying in our sovereign nations by having the courage to stare down or fight those who would subjugate us to their false idols and tyranny.

Like the duly elected Polish King back in 1683, Trump is giving spine and inspiration to other leaders across the planet to rise up against the ravages of Global elitism and the modern-day hordes by giving them the courage that they are not alone. He is giving a living example of the will to stand up against all odds and act–the most important ingredient of freedom throughout human history. Others are following.

Donald Trump, after barely surviving an attempted coup by his predecessor’s remnant government, with only one-third of the State behind him due to a hostile activist judiciary and a Socialist legislature void of any support or assistance–this modern hero, is almost single-handedly taking on the enemies of Western Civilisation.

Three to one odds?  Like Europe’s only elected king, Jana III Sobieski, back in 1683 when he saved Europe and Christianity, those odds are just about right for President Donald J. Trump.

The winds of freedom from Elitist tyranny may have begun in America with this new misundertood hero, but they are sweeping across Britain and the Western world. President Trump has sowed the whirlwind of freedom. He cometh with a sword for those who would subjugate free people–from within or without–and Hell cometh with him for those who have held us hostage.

And the Queen of England, in her infinite wisdom, knows a Champion when she sees one. God Bless them both.

ARMED CITIZENS ARE THE BANE OF TYRANTS