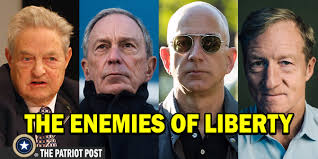 Guess who the largest recipients of America’s socialist welfare programs are? Come on. Give a guess without looking at the title.

I’ll give you a hint, The two largest beneficiaries of socialist schemes in the formerly capitalist United States of America are 1) the richest man in the world, Jeff-Boy Bezos, and 2) one of the richest families in the world, the Waltons of Walmart fame where us smelly ‘deplorables’ shop in America.

Once you know this, it makes sense why capitalists almost always turn socialists when they add those last three zeros to their net worth, doesn’t it?

They become the biggest takers among us, soaking up any loose government cash like a Hoover, just by buying off a few politricksters.

Not sure about down under—and I hope it’s not quite as corrupt as the Land of the Free Cash—but I’ll bet if you do some checking, you’ll find it’s much the same.

That’s why almost all of the Big Boys and Girls become Lefties once they reach the peak. The more socialist a government becomes, the more its gangsters can steal from us ‘deplorables’ (a.k.a. taxpaying citizens).

That gives these capitol-based con men and women more to give their big rich-cat donors to get in subsidies and welfare from from their hand-puppets in government. Sweet little game, eh?

And in Jeff-Boy Bezo’s case, this is in addition to the $1.5 billion in government subsidies his company received just in tax breaks and outright cash gifts to build warehouses and distribution centres he was going to build anyway.

The big cash every month comes in taxpayer-funded subsidies given his employees who are so poorly paid that a huge number of them are on the federal food stamp program.

The U.S. taxpayer has to feed them. That’s right—almost one of four of Bezos’ workers in some States are on food subsidies.

Jeff-Boy’s employees are also on tax-payer funded Medicaid program because they can’t afford the enormous cost of monopolised health care.

What’s more, they receive taxpayer-funded rent-subsidies, because they don’t make enough money working for the richest man in the world to afford a roof over their heads.

That’s right, Mate! Not only last year, but the year before too. But while Jeff-Boy’s company pocketed the 11.2 B without paying a brass farthing, U.S. taxpayers were stuck subsidising his employees to the tune of even more billions than that.

Jeff-Boy needs it to support his two biggest addictions:

1) funding Leftists socialist candidates (which is why he gets away with making billions and paying no tax), and

Both of these hobbies have proven to be very expensive. But what the hell. Most of it is OPM (other peoples’ money) and it comes right back from his Democrat servants in government anyway, so why worry?

In fact, the ubiquitous big box monopolist giants seen at almost every major intersection across America are all part of this rich boy and girl welfare gang.

Even George-Boy Soros gets millions and millions from the U.S. Government for his left-wing programs to destroy America. It’s not just Amazon and Walmart.

It’s Home Depot, McDonalds, and any of the Big Boys and Girls who prefer to let the taxpayers they so disdain – support their workers and ‘foundations’ instead of doing so themselves.

Jeff-Boy is the richest and gives the biggest bribes to socialist candidates, so he gets to raid the cookie jar more than most, but he’s not alone—he’s just the worst.

In fact, investigative journalist, Claire Brown, found that ‘in five states, Amazon ranked among the top 20 companies with the most employees living in households that receive food stamps, even in places where it’s not a top employer.’

Once Claire started nosing around, however, 25 different states either refused to give her the public data on the Big Boys and Girls’ pennies for dollars scheme—though paid for by the public—or she was told ‘they [the records] don’t exist.’

This is not the Big Boys first rodeo. In fact, I’m going to tell you a little story of how this first came to be. This story borders on the unbelievable, but it comes straight from the Supreme Court of the United States of America. It happened.

Imagine, if you will, that The High Court of Australia was hearing a mining case and brought in Clive Palmer to be the clerk of court – just for that day – to decide what happened.

Alternatively, imagine that The U.S. Supreme Court was hearing a case on High Tech monopolies and brought in Facebook’s Mark Zuckerberg to make the notes of what was said and decided. Outrageous, right?

So let’s set the stage. Before this case, if a corporation gave money to a politician it was considered and treated as what it was—a bribe—and both the giver and receiver were punished if not jailed.

Although the word corporation does not appear in the U.S. Constitution a single time, this case was falsely claimed — most importantly — to have granted the rights of citizenship to corporations.

The goal being, of course, to attain the power of giving bribes to politicians

The Founding Fathers of America left out the granting of any ‘rights’ to boxes of paper with a corporate seal, that was not an oversight on their part, oh no!

They knew very well the evils of corporate power. They despised them and that power they had to distort markets and legislatures to their will.

Thomas Jefferson actually wrote, ‘I hope we shall crush in its birth the aristocracy of our monied corporations which dare already to challenge our government to a trial by strength, and bid defiance to the laws of our country.’

So how did the Supreme Court of the United States find words not written in the U.S. Constitution —— a document they were sworn to uphold and which they were forbidden by the Tenth Amendment from adding — that these boxes of paper had the same rights as ‘We the People’?

They did it the old-fashioned way — they bribed those at the highest levels of power and corrupted the due process of law, just as is still being done today.

Tommorrow, Howell will be dishing the dirt on how these evil bastards pulled off the greatest heist in history, without anyone really noticing. Be sure to watch: Same Bat time, same Bat Channel.