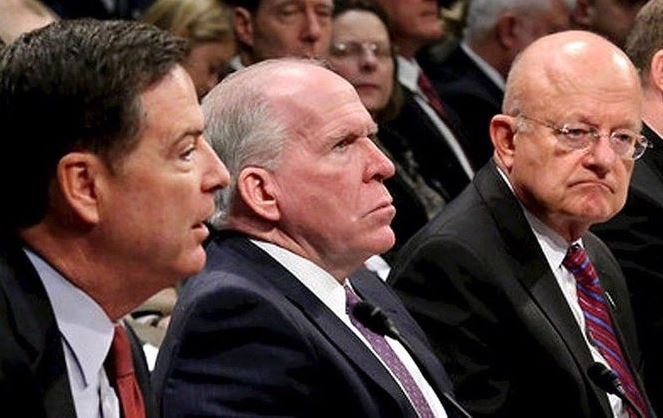 Montgomery had reported (under The Whistleblower Protection Act) that the heads of the FBI, CIA, NSA and DNI were involved in spying on Donald Trump, his family, 17 of his businesses, and millions of Americans.

How did Mr. Montgomery know this?  Because he was the contractor CIA Director, John Brennan, and Director of National Intelligence, James Clapper, hired to develop the program for the Obama White House.

So, who are the ‘et al’ in his lawsuit you ask? Hold on to your hat. It includes the same criminals who tried to take down Donald Trump—former President Barack Obama, former CIA Director John Brennan, former FBI director James Comey, former Director of National Intelligence, James Clapper; the NSA, the CIA and other former and current government officials.

Montgomery’s suit against these top Obama Administration officials, charges that these individuals and the agencies they ran failed to investigate or stop the illegal program after he reported it.

They did nothing about it, so he sued them personally in civil court for their failure to act.

Montgomery claimed these officials were using a secret wiretapping and surveillance program known as HAMR (The Hammer) to illegally collect private information to use against private citizens.

As part of Montgomery’s disclosure, he delivered evidence to a Federal District Court that not only Trump, but his family, and his businesses were being illegally spied upon.

Many others were also being spied upon including John Roberts; the Chief Justice of the Supreme Court, 159 federal judges (to build leverage against them to pressure for rulings); and millions of others, in violation of law.

Reporters Mary Fanning and Alan Jones were the first to interview Mr. Montgomery and break this story. They wrote, “Montgomery laid out how persons like then-businessman Donald Trump were illegally spied upon by Clapper, Brennan, and the spy agencies of the Obama administration.

He even claimed that these spy agencies had manipulated voting in Florida during the 2008 presidential election, illegal tampering in a way that helped Obama win the White House.”

Montgomery’s program included plug-ins capable of attacking ‘online banking, messenger, email and other apps that then transmit[ted] the collected data back to the HAMR data center.’

Fanning and Jones described the power of Montgomery’s program by saying it can “throw browser exploits at iOS, Android, OSX and Linux hacking targets,” according to the CIA Information Operations Center document.

HAMR sends specified plugins from a collection of iOS plugins called ‘Wild Turkey’ to targeted devices and installs (implants) them for surveillance operations.

This is Mr. Montgomery’s receipt for the evidence delivered to the DOJ under Court protection as a ‘Whistleblower.’

Do you remember the Mainstream Media cracking up in paroxysms of laughter back in March of 2017 when President Tump claimed he and his businesses had been wiretapped by the Obama Administration?

No one is laughing now—especially the heads of these agencies facing indictment and prison. It’s worse than ever imagined.

He produced 46 hard drives and 600 million pages of evidence documenting the claims in his lawsuit of illegal surveillance.

Montgomery was able to do this because he was acting under immunity granted by U.S. District Court Judge, Royce C. Lamberth.

Judge Lamberth was former head of the secret FISA courts so he should know how abused the system had become.

He once wrote, “We have to understand you can fight the war [on terrorism] and lose everything if you have no civil liberties left when you get through fighting the war,”

A private Supercomputer was rented for Mr. Montgomery at ‘Lockheed Martin in Los Angeles to process and collate all the collected data, organized by phone numbers.’

Guess who was on a private stint making millions as General Counsel and senior vice president of Lockheed while Mr. Montgomery was doing all of this?

The skunk who then came back in from the cold to run Obama’s FBI operation to destroy Trump—James Comey.

Montgomery stated that there was no connection with Comey on this private site.

Yet it seems impossible that he could have walked out of a CIA/NSA facility with the HAMR program and enough info to fill a supercomputer (which they rented under Comey’s purview) and Comey not know about it.

The HAMR program was allegedly run out of a ‘U.S. government facility’, so what was this offsite use of a Supercomputer all about?

Could it be something else?

Montgomery also claims that the CIA breached the FBI’s servers ‘seven times over a six-year period to find out what information the FBI had in their possession and to learn if there was an ongoing FBI criminal investigation into the CIA’s activities.’

Could that have been the purpose of the offsite Supercomputer project in Jim Comey’s private wheelhouse? Spies spying on the spies spying on Trump while setting the stage for the coronation of Hillary – their Queen – in 2016?

Keep in mind that Hillary Clinton’s Foundation was the subject of an ongoing investigation from 2001-2005. A grand jury was impaneled, in fact, and indictments were coming for the Clintons.

To be continued tomorrow….