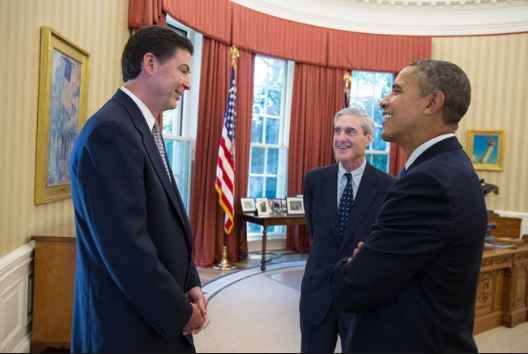 The Clintons were under investigation after taking in tens of millions in foreign cash and not reporting it as required by law. You never heard about that?

Well that’s why you need The Richardson Post in your life. We knew it, but no one in the media would publish it.

Yet the grand jury was dismissed and the investigation suddenly stopped in 2005. Why? Because it was taken over by—James Comey.

Does that name ring a bell? It appears that Comey was taking no chances. His friend, recently retired Deputy Attorney General Rod Rosenstein moved Clinton operative, Lois Lerner, to run the Tax-Exempt Branch of the Internal Revenue Service.

Rosenstein was the one who offered to wear a ‘wire’ on President Trump. At that time, he was over The Tax Division of the Department of Justice and was working out of the Baltimore field office.

The Tax-Exempt Branch of the Internal Revenue Service had legal oversight over Foundations. That would have put Lois Lerner in a position to handle a cover-up for Clinton.

Guess who was the Director of the FBI that agreed to let Comey, Rosenstein, and Lerner shut down the whole thing?  Robert Mueller, the same man who tried to destroy President Donald Trump in the Russia Hoax witch hunt–but failed.

Lois Lerner was rewarded for her part in the cover-up by being made head of the IRS under Obama. Comey was gotten out of town and given a cushy job at Lockheed-Martin (with a $5 million signing bonus)

Rosenstein was moved from the Baltimore office to DOJ headquarters at the top of the heap and Robert Mueller continued as Director of the FBI until Comey was flush with cash and ready to come back.

Comey was needed again in 2013 to cover up Hillary’s e-mail crimes as Secretary of State. Robert Mueller took his turn at the revolving door back to the private sector to be rewarded with millions at the Wilmer-Hale Law Firm.

Meanwhile his tag-team partner, Comey, came in from the cold to take care of the Queen in waiting, Hillary Clinton, as Director of the FBI to do ‘clean-up’ for her crimes as Secretary of State.

While having no authority to do so, Comey announced publicly that there would be no charges brought against Hillary Clinton for her clear violations of 18 U.S.C. §793 (The Espionage Act), even before interviewing her or 17 co-conspirators and witnesses. Compare that to the treatment of President Trump for no crime, by these same people.

Hillary is alleged to have been trafficking in classified information on a private server in her home. These servers were destroyed after being demanded and then subpoenaed by federal court order–which she simply ignored.

Taking no chances, she had the hard drives cleaned with ‘Bleach-bit’ (a program that wipes the hard drives) and then smashed everything that had evidence, including smartphones, with hammers. This clearly involves numerous other Federal crimes including 33,000 counts of Obstruction of Justice.

Oh well, friends have to stick by friends, eh?  The FBI does not make decisions to prosecute, only the Department of Justice does, but Sally Yates was part of the scheme as well and let FBI director James Comey–the cop–decide instead, though that is not his job or within his purview.

Apparently, she promised Bill Clinton she would ‘take care of it’, when they met in secret on the tarmac by Yates’ government jet in Arizona.

But What About Prism?

While it may seem like old news, remember the program the NSA contractor Edward Snowden exposed known as PRISM?

While allegedly created in 2007 by the NSA to monitor only foreign intelligence, Snowden laid that lie to rest in 2013, calling what they were doing ‘dangerous’ and ‘illegal.’  Those were strong words coming from the man who was doing it – sort of like Mr. Montgomery.

But Snowden was right. PRISM is now responsible for over 91% of NSA internet traffic acquired under the Foreign Intelligence Court’s section 702 authority.

Keep in mind that these same courts allowed spying on a domestic presidential campaign on U.S. soil without a single hearing or verified fact—on five occasions.  This has clearly all gone way too far.

I remember the story that journalist Glenn Greenwald broke in 2013. He exposed the fact that American phone and internet giant, Verizon Communications, had been ordered to turn over all of its records, yes all—almost exclusively on Americans—to PRISM.  So much for ‘foreign’, eh? And what about ‘limited scope’?

So it’s time to get these hacks out our lives. Fortunately, I am very hopeful.

Since a President of the United States has now been targeted for an illegal take-down by these same sordid scumbags and agencies that have ruined so many others, it will become a political mandate to shut them down, consolidate them, or revamp what is known as ‘intelligence’ in the future.

The U.S. Constitution does not authorise a single one of these agencies to exist. They are therefore precluded by the Tenth Amendment which clearly states that any power or authority not expressly granted is excluded.

Those powers which are unspecified as federal powers remain with the States or People.

That is why these unlawful agencies from Teddy Roosevelt’s FBI to Harry Truman’s NSA and CIA were all forbidden by the nation’s founders, as was their creation through an unauthorized power by rogue presidents using an Executive Order.

There is no such presidential power to legislate in Article II, the part of the U.S. Constitution that governs the Executive Branch and its powers.

The only military/intelligence gathering allowed under the Constitution (unless in a war officially declared by Congress) is the Navy and its intelligence arm.

The U.S. Navy is all over the world. Naval Intelligence as the sole collector could be quite effective, restricted, and aimed abroad rather than within.

Now that all of these alleged law enforcement and spy agencies have been weaponised and politicised, there is no possibility of ‘reform’.

It’s too late for that after their attempted coup of President Donald J. Trump. It’s time to put the spooks back in their place. High security prison is a good spot to house them until we figure out what to do with traitors of this magnitude.

I just hope the President has the courage to give them no lenience and no quarter.

I KNOW YOU BELIEVE EVERYONE WAS BORN MUSLIM