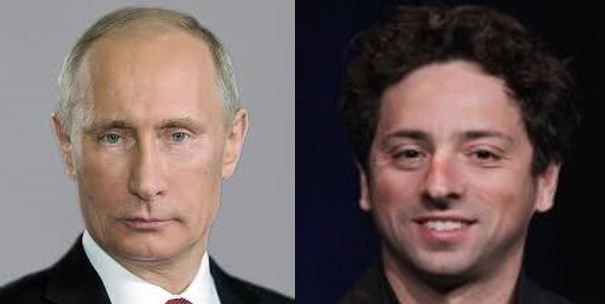 What do Vladimir Putin and Sergey Brin have in common besides being Russian billionaires out to destroy Trump?

A lot, actually.  Both run super-secret spy operations. For Putin, it was the KGB (now known as the SVR) which is still under his purview as President of the Russian Federation.

For Brin, it’s an even more powerful spy operation known as Google, Inc., which is still under his purview as Founder and Chief Executive.

Both of these Russians made their oligarchic riches the old-fashion way—through questionable and often corrupt means shrouded in secrecy, enforced by unmatched ruthlessness against opponents.

Try going up against either of these Ruskies, and the outcome is likely to be very bad. One of them is alleged to have tried to rig the last U.S. presidential election through Donald Trump in 2016.

Meanwhile, the richer, more powerful one on the right actually did try to throw the election through calculated disinformation and rigging of data searches.  Alarmingly, he promises to do it again in 2020 with better results.

Fortunately, both Putin and Brin seriously under-rated the American people’s overwhelming disgust with the Socialist Democrat Party and its Media minions.

Consequently, neither succeeded in getting their Socialist Queen on the throne. Both, however, are widely expected or even promising to use their hacking and rigging operations again in the coming year’s U.S. election.

I just wonder if they plan to co-ordinate or ‘collude’ on these efforts given their aim and common origins as Russian Communists.  Now that would be a story.

Is it really that far a stretch to suggest that a Russian who was brought to America in his youth from the Soviet Union, was destined to gather information on Americans that might be used to harm America?

Is it really a complete accident that his father–a professor of advanced mathematics–taught young Sergey these esoteric secrets privately at home—an admitted fact—and prepared him for the tasks to come?

Or how about this—isn’t it a bit odd that Brin’s mother was somehow cleared to work at NASA’s Goddard Space Flight Center, despite being a highly educated scientist from the Soviet Union?

The first thought I had from living back then is that she could never have received that education without being a card-carrying member of the Communist Party, and with those skills, do you really think the Soviets would just  have let her go to work for the enemy?

“Dasvidaniya, Comrades!  Have a good life in Amerika!”  Does that not sound just a wee bit suspicious?

And as fresh Russian immigrants allegedly escaping harsh treatment by the Communists, how did they get young Sergey into one of the most expensive universities in the world (Stanford)?

Or how about that National Science Foundation grant he got from the Clintonista regime that was in power back then to start Google? Fact upon fact kept piling up. I couldn’t sleep.

And how did Sergey Brin’s parents, Mikhail and Eugenia, simply leave the Soviet Union?  For those of us alive at the time, we know that was not possible unless there was more to the story.

Leaving Russia was known as ‘defection. It was not tolerated, much less a choice people were simply allowed to make.

Saying, “Oh, I think we’ll move to America,” would get you and yours a free vacation to the gulag in Siberia—for life—not a trip to the land of the free.

And that’s what suddenly occurred to me just this week when it was revealed that since 2016, Sergey Mikhaylovich Brin’s spy operation shifted its awsome power and corporate “focus” to just one goal.

Google is determined to defeat duly elected American President, Donald J. Trump, by any means necessary in 2020—and replace him with a friendly Socialist.  I would be grateful to any of you who can dispel my suspicions, so that I can sleep tonight.

But all of this is what got me thinking—which admittedly, can be dangerous. Back in the seventies, there was only one way to leave the Soviet Union without ‘defecting’ (or dying).

That was through a program run by Putin’s KGB. That part my friends, is not speculation. That’s history. I was born in 1953 and so I actually remember it Baby! The people who came to the West through that program were – and still are – referred to as ‘the illegals’ in Russia.

ONCE UPON A SPY STORY

Meet Jack Barsky. Jack died at the age of 10 and was replaced by this KGB mole, Albert Dittrich. His mission was to live in America and spy for Putin like hundreds, if not thousands, of others.

It’s no secret that the Russians have long tried to plant ‘sleeper agents’ in the US. These agents were men and women indistinguishable from normal Americans. They live – on the surface – completely normal lives.

Unfortunately for the Russians, some of them liked the USA so much that they didn’t want to go back to the “Socialist Paradise.”

What happens then? The BBC’s Brian Wheeler got to ask Barsky/Dittrich all about that after he defected and asked to stay rather than return to Russia.

According to Barsky (and the FBI), there are hundreds and hundreds of others still living as Americans, working secretly for Vladimir Putin.

10 others were arrested just on one day in 2016 through the FBI operation Ghost Story. Among them were Donald Heathfield and Tracey Foley.

Those two claimed to be Canadians, but they were living the American dream–in America. Then one day, an FBI raid revealed the truth: they were agents of Putin’s Russia.”

Their sons recently told the story and that of their parents, who in reality were Andrei Olegovich Bezrukov and Elena Vavilova.

They were traded back to Russia in exchange for U.S. spies after living in America for decades—spying on us.  Do these stories differ significantly from Sergey Mikhaylovich Brin’s?  Were my sleepless nights justified?

But whether Google’s Comrade Brinn is a Putin asset or not, he has been more effective at decimating America and its constitutional republic than any spy in history.

He has done more to move America toward Socialism and stifle our right to free speech than anyone might have believed possible.

This radical Russian Socialist holds the power to hide searches from us. He can de-platform and de-monetize us on Google, YouTube and the other 200 internet-related companies under his control.

Not only that, but he has helped to divide us politically and drive the nation to the brink of self-destruction.

Brinn’s Chief of Disinformation and algorithmic disfunction, Jen Gennai, said it on camera.

https://invidio.us/watch?v=y9pIfGqo_Xo& Watch this before it gets taken down – yet again.

Obviously she didn’t know that she was being filmed, –but she admitted that not only was the company’s “focus” since 2016 to alter the outcome of the next election, but that they were so powerful they could not be dissembled or stopped from that goal by anyone.

THE ENEMY OF MY ENEMY IS NOT ALWAYS MY FRIEND

THE DEVOLUTION OF DARWIN PART TWO: THE NT FUNDING MODEL