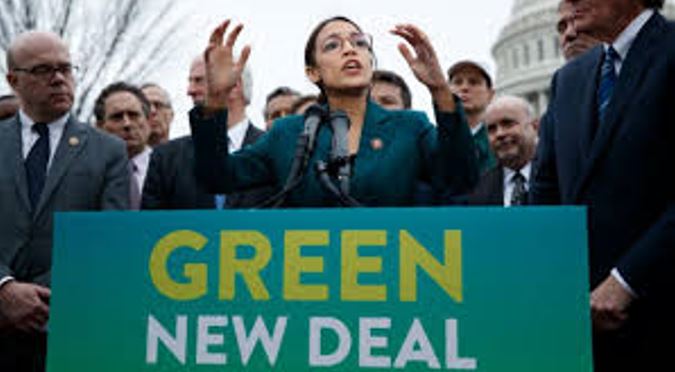 The Richardson Post recently broke a story about Alexandria Ocasio Cortez and her millionaire handler, Saikat Chakrabarti (on the phone in the picture below).

We exposed them as pawns of former CIA director, John Brennan, and as provable Socialist frauds serving admitted Nazi sympathiser, George Soros —or at least using his cash to promote their Far Left agenda.

The Breaking News, however, is that Chakrabarti admitted to a reporter from The Washington Post this week that their “Green New Deal” was never really about the environment.

It was just a clever ruse to grab control of all private property in America – yes, all of it. We broke this news previously on The Richardson Post, but now it’s confirmed by the man with the plan himself — Saikat Chakrabarti.

If that isn’t enough to set alarm bells ringing, they are also under investigation by the Federal Elections Commission for illegally funneling roughly three-quarter million of George Soros’s money and other campaign cash to fellow Socialist candidates in violation of law, and face 29 separate charges. But don’t worry about them. In America, “law” is only applied to Republicans. Democrats can do pretty much anything and get away with it (Hillary Clinton comes to mind).

But the MSM says the charges were “overblown”—even though the board was largely Democrats, just as any press observer might expect. As we’ve seen, a Democrat can delete 33,000 e-mails (that are under subpoena), illegally traffic in classified materials on an unsecure server, smash hardrives and smartphones (also under subpoena) and be officially absolved of all these crimes before the investigation even begins. Republicans are treated quite differently, as we’ve also seen. They can be found guity of crimes later admitted to have never happened. General Mike Flynn comes to mind on this one.

But admitting that their Green New Deal was never in reality about the environment is a big deal, and—in his own words, Saikat said, “we really think of it as a how-do-you-change-the-entire-economy thing.”

That translates from Socialist-Speak into English as, ‘it’s a how-do-you-take-over the entire economy thing’.

Clever. I have to give them that. They’re using the Global Warming “World’s Gonna End” hoax to take complete control of all private property in what was once the freest nation on earth. What’s more, they intend to do it without a shot being fired — and in spite of the fact that temperatures haven’t risen in 15 years!

But the sycophantic Mainstream Media is silent as stone on these facts, as that might mess up the Socialist narrative. The press is in lockstep with the Left, and rightly accused of simply being a wing of the Democrat Party. It was recently announced in a Harvard University study that mainstream press coverage of the Trump Administration is 92% negative. Even Fox News is 52% negative against Republicans and Trump, which has led to a meltdown in public trust of the press.

On February 7, 2019, the Democrat Socialists who presently control the U.S. House of Representatives demanded that all structures—as in every single one in America—be torn down and rebuilt to unknown standards, calling it The Green New Deal. Almost every Democrat running for President has endorsed this bizarre plan.

Once the decimiation of every buidling in “Amerika” has taken place, their plan requires them to be powered by yet-to-be invented sources of renewable energy — within just 10 years, when they end the use of any fossil fuels under this plan. It was clear at that point to any thinking human being that the environmental part of this proposal was just sugar on top of a crap pie.

It had absolutely nothing to do with the Democrat’s stated purpose.  It never does, in my experience.  It’s always about power (and not the electrical kind).

And like all the others, this latest Democrat proposal was just that. It was an unabashed grab designed to put control of all private property under federal Socialist bureaucrats using the guise of saving us from ourselves — from Global Warming — which the facts now prove simply isn’t happening. The world’s average temperature has actually gone down 1.3 degrees in the past three years.

The only difference this time is that Saikat Chakrabarti, the man who actually created the plan, spilled the beans to a friendly WaPo (Washington Post) reporter who must have been off his meds and didn’t realise that this bombshell was supposed to be insider info—one Comrade to another—not to be shared with us, the hairy unwashed.

Forgetting the absolute impossibility of the proposal, we focused solely on the disturbing question asked by no one else which is, how could they legally take our property rights away in such wholesale fashion, in violation of the U.S. Constitution?

Absent a complete abolition of private property rights by vote of Congress, they couldn’t tear down and rebuild an outdoor toilet, much less every building and home in America. It’s the most egregious breach of the U.S. Constitution in that nation’s history, and with a Democrat in the White House instead of Donald Trump, it might have slipped through before any of the bonehead’s running Congress thought to ask that basic question. By what power can the federal government do this?

So, we didn’t pay any attention to the unicorns, dancing bears, shiny tinsel or smoke and mirrors. We paid no attention to the press fawning over this incredibly stupid idea, the complete insanity of it all or the impossibility of accomplishing it. Doing so might actually have led to further discussion, giving it undue credibility.

We even ignored the dearth of means or money to start such a self-destructive effort.

All we wanted to know is “how are you going to come to my home or business, tear it down, and rebuild some crap designed by your Central Planning Committee without first stealing the property rights from me, its lawful owner?”

That was—and remains—the only question that matters. By what means are you going to rob me of my right to my own property and dictate what happens on it? End of story. How are you going to do it, Alexandria Ocasio Cortez and Dem-Socialist gang?

BY VOTING TO STEAL IT, THAT’S HOW!

And that is why ‘Democratic Socialism’ is all the rage with Leftists today.  Rather than having messy stand-offs and revolutions, Marxists simply evoke and misuse the democratic aspect of our republics and trick us into voting ourselves into tyranny by offering us shiny objects belonging to others. Damn clever, but the end is the same, unfortunately, and that is lots of death and the destruction of a nation’s economy.

They steal property and rights from those who earn or own and shift it to those who don’t. In exchange for this largesse, the Leftists receive the undying loyalty of these Plebs at the ballot box—that is, while they have one .

That’s why our Anglo-heritage nations are generally republics—to prevent this from happening. I once read, “Democracy is the insane belief in the collective wisdom of individual ignorance.” With a republic, certain protections are written in stone —like property rights —so the mob can’t simply vote to steal them.

NEVER PAY ATTENTION TO WHAT SOCIALISTS SAY.  LOOK ONLY FOR WHICH PROPERTY OR RIGHT THEY WANT TO TAKE, AND HOW THEY PLAN TO DISARM YOU OR CHANGE THE RULES SO THEY CAN DO IT.

When I asked a proponent of The Green New Deal online about this, the answer was, “But you get to keep your property! It will stay in your name!”

Well that’s just great.  You tear down my building—stopping my business, income, or place to live for however long it takes a bureaucrat to build a 100% energy efficient structure running only on renewable energy (which is not in my lifetime).

I then have some snot-nosed coffee-shop dweller controlling every aspect of that process from afar, leaving me with the rubble and liability when they screw up or have to admit it was all a hoax to gain control over a free people and their property.

No thanks.  I’d rather vote you scary radicals out of power in 2020 and hope President Trump gets re-elected to prevent this attempted takeover of America.

And I’m predicting just that for the election in November of 2020 as people of all colours, creeds, and walks of life are finally waking up to what these people are really all about. The Democrat-Socialists want power and control over every aspect of life, including everyone’s home and property. With this, they’ve gone too far for reasonable minds not to wake up and smell the coffee. Time to dump the radical collectivists and start the pendulum swinging back in direction of individual freedom before it’s too late.

Results beat bullshit almost every time and this man has exceeded his promises in every regard to all races, creeds, and genders.

He’s our only hope in America. One more Democrat in The White House now that they are openly Socialist, and I fear for the future of the Republic.