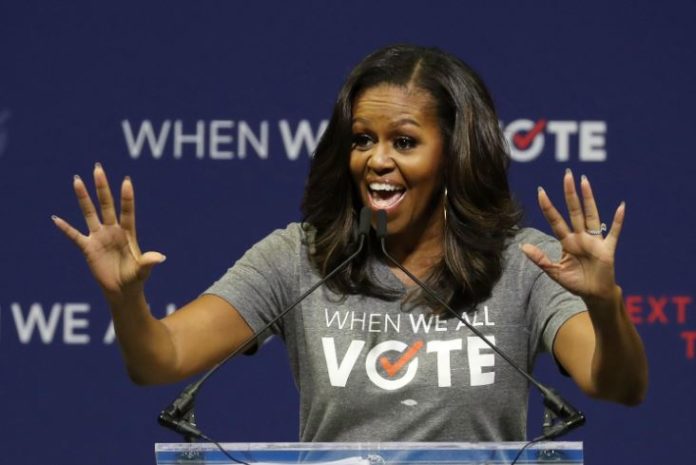 I recently aired my opinion that none of the Democrats in the race for president in America could beat Donald Trump in 2020—and that is still true.

Unfortunately, there is one person not technically in the race for that office, who could. Paint a smile on the angry face of Obama’s fire-breathing dragon-wife, and she’s got a shot at it.

OK, I don’t understand how that can be either, but it’s possible—even likely.

How, you ask? Well imagine this. Suppose she waits (as she appears to be doing) until all 23 Socialists now running as Democrat candidates (including her husband’s Vice-President, Joe Biden) have bloodied one another in the primaries.

All of them are covered with dirt and bruises already while Michelle just sits on the sidelines, unsullied, reading up on her Saul Alinsky.

Then at the real convention, Michelle waltzes in and takes the nomination. That means that she will never be forced to debate or admit to her own radical Leftist beliefs.

It’s absolutely brilliant in a Machiavellian sort of way. No one can say she didn’t keep her promises because she won’t have made any.

Nobody will have any idea what she stands for other than from her younger days as a community organiser for Leftists.

That’s where she met Barry Seotoro, a.k.a. Barack Obama.

You say that’s unfair, and I say they don’t care. Former Democrat National Committee Chair, Donna Brazille, admitted that Hillary Clinton took over the finances of the DNC in 2016.

She then personally destroyed any chances of the one-time front-runner, Bernie Sanders, so he couldn’t win ‘her’ primary. As always, Hillary got away with it. Donna even called Bernie to apologise.

BUT COULD MICHELLE WIN AGAINST THE MOST SUCCESSFUL PRESIDENT IN U.S. HISTORY?

Much as it pains me to admit it, the answer is probably yes. Michelle could trump the Trump. How?

Well – she has a few trump cards of her own. First of all, every Hollywood sycophant will support her. Any who break ranks will get the Israel Folau treatment.

Every Marxist who hates America will march to the drumbeat of the radical Leftist media fawning over dearest Michelle. She’s still the Belle of the Bolshevik Ball.

She will also be the darling of the talk show hosts. Oprah will be literally drooling at the thought of a black woman for President. She could torch all of Trump’s incredible successes in a single fly-over.

Any who question her Marxist beliefs will be set upon with torches and pitchforks. “Racist!” they will cry. “Misogynist!” they will scream.  Of course, they will never ask the question, “What does Michelle Obama actually stand for?”

Richardson Post readers know the answer to that question. It is nothing but power and control—over you and the world.

The Soros/Zuckerberg/Bezos billionaire class will open their vaults and heap gold in her lair. They are determined to save their dreams of a global order.

The Party of Wall Street, Davos and Silicon Valley must have their way. This party of power will provide all the sinister tools in their magic, social media black boxes in an attempt to seal her win.

They will continue their relentless assault on the the man who brought America back from the brink of disaster—President Donald J. Trump. He is the only one who kept them from the takeover they sought.

Many women (and most of those who wish they were) would flock to Michelle as well, to seat the first female president. The media will do everything possible to promote racism and sexism.

“Forget Trump’s successes,” they will say. “Forget the booming economy. Michelle is a woman – and she is black! Who cares about her policies, who cares about her character, she is a BLACK WOMAN!!!! Yaaaaaaay.”

31% of Black Americans have moved to the Trump column since 2016. Sadly, once Michelle starts flutin’ that sweet racist tune they may go all dewy-eyed and stumble back to the Democrat plantation.

Queen Michelle will “Let them eat cake,” instead of working for a living, like the old days.

There will be no need to work, strive for the American Dream, or seek success as everything will be free – until Michelle runs out of other people’s money-then it will get ugly.

Fortunately, there are fewer worries on the plantation. As always, once a Democrat is in charge, opportunities for minorities will quickly disappear.

Their jobs will once again be shipped offshore by Ms. Obama’s globalist Davos supporters. That will once more provide a dependent underclass who will vote Democrat in exchange for cake crumbs.

I had thought that a Michelle Obama candidacy was an impossible nightmare. Unfortunately, lingering questions remained.

For instance, why did Michelle and Barry buy a mansion in Washington rather than returning home to Chicago and the Lorenzo’s communist cell that launched them to fame?

Were they planning this move all along? I’m beginning to think so, but I had hoped that nightmare was just caused by indigestion.

And why is Michelle constantly in the news more than ever now, when she should be out to pasture?

Why hasn’t Barry already endorsed a Democrat candidate? His own Vice-President, Joe Biden is leading the pack of Socialists in the primaries.

Can you think of any reason other than that he’s saving his endorsement for Michelle? I can’t, and it’s late in the day.

It’s like having to admit your worst nightmare may be true. Maybe Kibler cookies are not baked by elves. Maybe Elvis really is dead.

And maybe this true Marxist is back from the pasture ready to rumble. If she really does get in, she will destroy that which she so despises—a restored America headed back to freedom.

I also wrote months ago that the cabal had chosen the gay mayor, Pete Buttigieg, as their anointed. Unfortunately, he recently choked on a simple police matter back in South Bend, Indiana where he is still mayor.

That left the Soros gang looking elsewhere and Ms. Obama looks like the best one their billions can buy.

It’s slim-pickings in the Dem-Socialist camp this season. Unfortunately, with all the money and power of the deep state, the press, big tech, Wall Street, Hollywood and the rest behind her, there is a chance that Michelle could unseat Donald Trump. God help America if that happens.