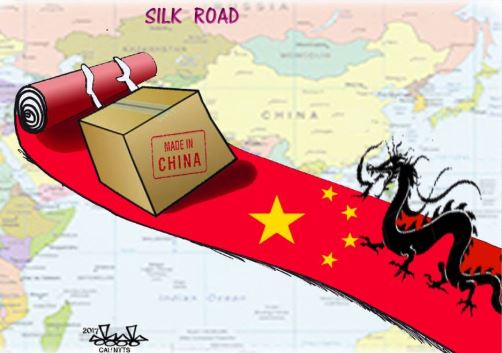 The Enormous Belt and Road Initiative

It doesn’t matter how you measure it – the Belt and Roads Initiative (BRI) of the Chinese President Xi Jinping is huge. Created and launched in 2013, it mimics in part the positive attributes of the role the “Silk Road” played in the development of China.

It did so by tying Europe and Asia into a single trading block way back in the early centuries. This is a “New Silk Road” with specific economic areas identified and being developed by super-efficient infra structure investment and design.

This is being done to facilitate the connection of markets with suppliers in a way never seen before. Is that all it is – or is it actually much more?

To understand in part the magnitude involved, to date more than 60 countries, accounting for two-thirds of the world’s population, have signed on to projects or indicated an interest in doing so.

These are generally partnership arrangements including low interest loans and not grants, thus incurring debt on the partner for funds provided by China using various mechanisms.

This is manipulation by the second largest economy in the world. It is done in a way that whilst it claims great benefit to partnering countries and groups it also has enormous potential for regional chaos in the event of default on loans.

Colonisation – whether its old or new – is still colonisation.

What Does Belt and Road Mean?

In the normal oriental language translation interpretation “the Belt” refers to a terrestrial link up across Eurasia deep into Europe. The “Road” refers to a maritime link across the Pacific and Indian oceans from the Americas to Asia taking in Africa and Oceania.

The leader of our close neighbor – New Zealand – has embraced the concept with glowing comments. including “Forging the great Southern Link” and “New Zealand becoming the gateway to the Americas”

In Nov. 2018, the Victorian State Premier absolutely exceeded all levels of accepted protocol and Federal relationships by entering into a “Memo of Understanding” with the Chinese Government under the BRI program.

It was just prior to the Victorian election and no doubt he felt that there were some votes in thumbing his nose at Canberra.

The perceived result of a federal election in 2019 would have served to accelerate that poorly thought through decision.  Mind you, the actual wording of the document reads more like the preface to a romantic novel than it does an actual “understanding”.

Victoria is in the middle of its greatest infrastructure spend ever with $40B targeted over the four-year period.

The City of Melbourne is racing towards “the most congested capitol in the country” award, but the results at the polling booth indicate that the strategy is fuelling success in the eyes of the voters. Of course, it needs to be funded. Taxes or Debt?

It is often said that “the proof of the pudding is in the eating.” Every Chinese diplomat around the world is promoting a certain ambience by the enthusiastic promotion of the growth of this “great” initiative. Notwithstanding this fact, the initiative is not without its behavioural oddities.

Whilst the wooing of Victoria was going on in Eastern Australia, on the other side of the Continent a massive legal exercise is/was going on between an Ex-Australian company Mineralogy (Now N.Z) and a Corporation owned by the Chinese Government.

Mineralogy has agreements with the West Australian and Ipso Facto the Australian Government for the exploration and development of Iron Ore deposits in the Pilbara region of Western Australia.

They in turn entered into agreements with a Company owned by the Chinese Government. These contracts included the establishment of production facilities by the Chinese and Royalty payments for the Ore to Mineralogy.

Mr. Palmer the owner of Mineralogy has just won a Court case against his Chinese Government “partner” to remedy breaches in their contract.

The appeal against the judgement has been dismissed. It would appear that the causes for the breaches were mainly associated with massive over-run costs on budgeted production facilities and consequent delays.

According to many reports and observations the attempts at “bullying” in order to compromise the realities were very evident through the whole process. If Mr. Palmer did not have the experience and fortitude, this bullying may have succeeded.

The Chinese Government sought assistance from the Western Australian Government in an attempt to undermine the Mineralogy contracts. The Premier conducted numerous meetings and trips to bring pressure to bear. Unsuccessfully, as it happens.

There are however on-going issues yet to be resolved.

This is a commercial arrangement between commercial companies. Bear in mind however, that one of these companies is owned by the Government that is promoting the BRI as a solution too much of the worlds wealth creation requirement going forward.

This type of behaviour does not fall into the “good neighbour” category. If the BRI is at all beneficial for the world it has to work equally with all parties and adapt to the laws and cultures where it operates with an even hand, especially when a partner has the required capacity to provide part of a solution.

In order to do this, it needs access to more land which is currently under the control of – yes, that’s right – Mr. Palmer.

The Premier of W.A. has publicly stated that his Government will not be entering into any Memorandum of Understanding with the BRI. Funny that!  It only happened after the results of the Federal Election were known.

Mr. Palmer has taken his company offshore as a safety precaution in case of action by the W.A. Government which may disadvantage his position.

The Chinese Government is threatening to close down the whole operation with consequent impact on the States job programs and other issues.

Mr Palmer cites other examples of behavioural issues on the part of his “partner”, through this whole process. A pressing one, is lack of a $500M refurbishment surety which was not lodged.

It all seems a very strange way for a Government to behave when it is promoting a partnership approach right across our part of the world.

It would seem to be another example of the attempted transference of Chinese law and culture into our established legal and regulatory procedures. Clearly, they are working on the old “when you have them by the short and curlys, their hearts and minds will follow” adage.

In the meantime, the Darwin Port is under review for up-grades by its new owners. There are a growing number of airports and landing facilities coming under new ownership throughout the country and Agricultural enterprises continue to change hands.

The BRI is well underway and we are a part of it. We only constitute a minuscule population in relative terms. Therefore, our role in the overall scheme is as a continuing but more sophisticated supplier with only a very small niche market potential.

That is what we will become. We will just be a transhipper in the “Great Southern Link”

The prime position has already gone across the ditch to more receptive embraces.