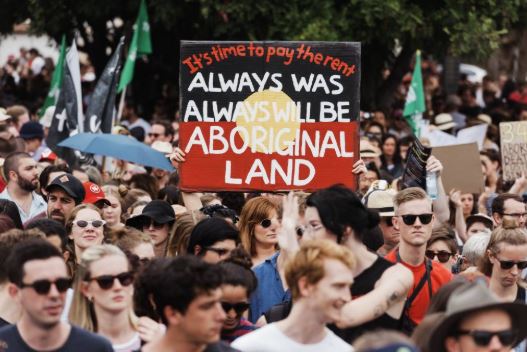 When Mandawuy Yunupingu bought the Treaty song to the rockers in 1988, little did we know just what we were in for. My personal sympathies lie more with his nephew, the masterfully talented Doctor, but as the current call resonates, we need to address it.

Thirty years on and we have just had another gabfest. This has created a “from the heart” exhortation to change the fabric of our Federation. The justification is to somehow make the past easier to bear for some Australians!

We have a key minister in the Government who wishes to race into a referendum in order to appease the proponents. This may have stalled because, in the light of day, the climate is not looking at all rosy.

In the interim period – and particularly over the last couple of years – the State of Victoria under its constitutional rights is moving forward with a Treaty proposal with its own local indigenous people.

This is moving forward as we speak and by the end of this year, an authorised indigenous group should be in place. They have been selected after a lengthy and in-depth consultative process confined to the indigenous groups and the Government. Other Victorians appear to have been excluded.

The terms of the Treaty will then be negotiated. It is probably right and proper that this happening in Victoria.

That state, as a colony, did have a Treaty negotiated by Batman (no, not that one – the explorer Batman), when he arrived in Melbourne.

It turned out be the shortest Treaty in history because when it reached Governor Bligh in Sydney Town a month or two later – he tore it up.

Just how a successfully negotiated legal Treaty in Victoria sits – if and when a Commonwealth act sits over it – will be of interest.

Whilst our Constitution has some failings, it is often blamed for things that can and should be resolved by us here and now.

Australian citizens are all equal and the sooner our legislation reflects that, the quicker we can get on with the realisation of our full potential.

“We all have a story. The difference is: do you use the story to empower yourself? Or do you use your story to keep yourself a victim? The question itself empowers you to change your life.” ― Sunny Dawn Johnston

Victimhood is an insidious affliction. It robs individuals of energy, self-esteem and positive attitudes.

It often leaves them listless and prey to the vulnerabilities perceptually eased with mind-altering substances.

Its victims are many and varied but if victimhood is collective, it completely alters mind sets and pipe-dreaming becomes a way of life.

This is not aided by decades of overreaching expectations.

“In life, you can either be a victim or you can be a survivor. It’s a mindset.” ― Clyde Lee Dennis

Remorse impacts the vulnerable in terrible ways and can often lead to death.

At the same time as this is going on right under our noses our self-appointed unelected political masters in New York were/are relentlessly moving forward with their agenda.

They are aided and abetted by a bunch of clowns in Canberra who continuously assure us that they have our best interests at heart – but then go to great pains to destroy the illusion.

The Treaty shadow hangs over us all.

If you look long and hard you can see some glimmers of goodness in the United Nations manifesto. Some benefits can be seen in the World Heritage listings program.

Here in Australia we have 20 sites now listed, plus others under Ramsar, and like many Australians I have been fortunate to visit many. There are two more sites moving slowly through the very long process for recognition.

Like most things, there are impediments to getting them done.

It was before the Treaty song that we became aware of “Badgerys Creek.” It was a sleepy little village in Western Sydney that had been chosen as the site for the second Sydney Airport.

Well, it has still not happened and now at the eleventh hour, and after innumerable false starts and enquiries, we find that the whole process needs an OK from the United Nations because it impacts the World Heritage listed Blue Mountains.

I wonder if we considered that when we requested to have them listed?

Likewise, Sydney needs more water storage and wants to lift the wall on the Warragamba Dam. That decision will also impact an area which is obviously considered part of the Blue Mountains.

Consequently, it will also need the Ok of the United Nations. So, in future if you are thirsty in the Harbour Town; you can get your fill by looking at the beauty cast before you out West.

Correctly the Globalists argue that Agenda 2021 and 2030 are voluntary codes and have no impact whatsoever on sovereignty.

They probably don’t really need it when they have a few of these chits to pull in using the treaties that are already floating around.

Just after the bureaucratic unelected inspection team/s have left us after tramping around the Blue Mountains, in come the next mob.

Ever heard of OPCAT? Well, if you haven’t you soon will. In 2009 we signed a Treaty under the United Nations covering laws on eradication of Torture.

I’m sure it sounded like a good idea at the time. Signing a treaty has various ramifications but basically it is a recognition that the treaty – as finalised by the various committees and then the General Assembly – is acceptable to us.

Of course, if we don’t have to do anything it would be OK, wouldn’t it!  The point is simply to show the world how caring we are.

To date – and based on processes in place at the time of Federation – the executive branch of Government enters into treaties on behalf of the citizens of this country.

Parliament then has view of the treaty after the fact unless the treaty is deemed sufficiently important.

In that case, Parliament is advised, and members are furnished with recommendations from bureaucrats on which to make an assessment prior to signing.

Enter OPCAT, from the masters of the acronym, the Option Protocol to the Convention Against Torture. This was finalised by our Government in 2017, eight years after the Treaty was first signed. It was done via a process known as Ratification.

This was enough time for the original members in the house and half the senate to have changed a couple of times. The vote would again have been taken, presumably on the recommendation of various bureaucrats.

At this time, circa 2017, Australia was scheduled in the rotating world of the United Nations to be nominated for a seat on the Human Rights Commission – a very powerful arm of this august body.

This is what we signed up for when we signed OPCAT

“Under Opcat, Australia will be obliged to establish an independent watchdog, known as a national preventive mechanism.

Australian places of detention will also be subject to international inspections by the UN subcommittee on the prevention of torture.

Fortunately, the watchdog will not have the right to inspect offshore places of detention run by Australia.”

The Human Rights Commission consists of 47 members and after an initial posturing between the three candidates Australia, France and Spain for the two positions France withdrew and Australia and Spain entered for their three-year stint.

The final acceptance of Australia was predicated on its ratification of OPCAT.

“Australia will use its seat on the United Nations Human Rights Council to push for the empowerment of women, indigenous rights and abolition of the death penalty. It will also push for reform of the controversial body.

Australia was elected unopposed to the council on Tuesday (AEDT), joining Spain as a Western European nation for a three-year term, replacing the Netherlands and Portugal.”

Was it the allure of a strut on the world stage for Julie Bishop which sealed the deal? Whatever the cause, it has subjected the people of this country to a further dumbing down and future subjugation to unelected foreign entities.

That is a situation which we have already fought a number of wars to avoid.

The sub-committee chair of OPCAT has a slightly more bullish outlook on their work.

“The chair of the subcommittee, Sir Malcolm Evans, is quoted as saying that inspectors had, “the right of unannounced access to any place of detention or any place we believe people might be being deprived of their liberty”.

“Our visits are relatively short; we can’t look at everything. We have to be strategic. We will be doing our homework.”

He said he was confident the Australian authorities would understand and cooperate with the inspectors’ expectation of “completely unfettered access to all places of detention, to any person, place or thing, to people of all categories in detention”.

The inspectors will have a broad brief. They will be looking at prisons, youth detention centers, immigration detention facilities, psychiatric hospitals, police stations and social care environments such as aged care and disability homes.

“The reality is these are institutions which are supported, regulated and run by the state,” Evans said.

“The reality is people are being detained and subjected in some instances to forms of ill treatment for which the state would be accountable.”

He said the subcommittee was particularly concerned about marginal groups in society which they believe are often subject to poorer treatment than others for various reasons. These include disability, race, age and infirmity.

Countries were usually obliged to establish the mechanism within a year, but Australia exercised a right to delay it until the end of 2021.

Sir Malcolm said the subcommittee also hoped to prompt some “self-reflection” about the way a country runs its custodial systems.”

The establishment of the framework that will allow us to honour the commitment inherent in this treaty requires massive changes in current Federal/State/Territory relationships with consequent cost shifting provisions. Good Luck with that.

There are more Treaties to come through yet and no doubt the invitations issued by various Governments will tie this country up in more issues.

No-one is arguing against finding a better way to do things. The argument is simply that we can and must do it ourselves.

Do we need more visits from groups intent on marginalising our country and our way of life?

The Organization of the Islamic Cooperation (OIC) was founded to work together to promote the interest of Muslims worldwide.

In its own words, the focus of the OIC includes “Islamic solidarity” and “non-interference in the internal affairs of member states.”

The OIC is the largest single subset of both the G-77 and the NAM. It was established in 1969 and now includes 56 UN member states.

The UN is made up of 193 member states. Only 87 or less than half are full democracies under Freedom House criteria.

Why are we subjecting ourselves to the rules and regulations of the UN? It is clear that the UN is very swiftly becoming the mouthpiece for countries that have a very different way of life than us.

What is worse is that they are fulfilling century’s old objectives to dominate the world?

Why are we allowing the executive arm of our Government to sign and process treaties in a manner that may have worked 100 years ago, but which today, can only be described as archaic?

Why aren’t the Australian people informed via Parliament of the importance of these treaties and why are they not fully debated in Parliament.

There is an escape clause in OPCAT subject to 12 months’ notice. I think we should invoke it.