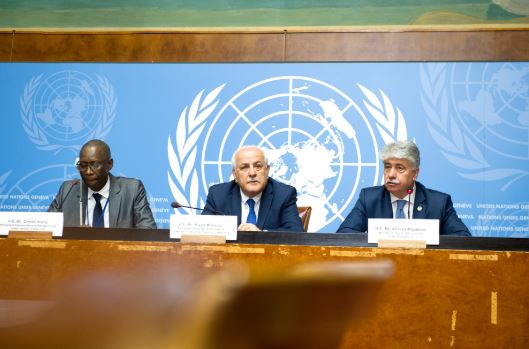 The Global Compact on Migration (GCM) and its impact on our future.

The Global Compact on Migration (GCM) is now done and dusted in the UN framework. The Compact provides guidelines on a common approach to international migration in all its dimensions.

There are of course two like “compacts”. One addresses refugees, asylum seekers and covers their detention (Global Compact on Refugees). The other addresses migrants (GMC).

Both Compacts stem from the New York meetings (Sep. 2016) drawn together under the auspices of the then POTUS Barrack Hussein Obama.

The spinners at the UN have tried their best to maximise assurances that this is another massive tome that has no teeth. They stress that it is for individual states to exercise their own application of its clauses.

So, it begs the question “If it does nothing, why do we need it?”.

Unfortunately, assurances of “no teeth” are not the case and the future will attest to that. There will be a massive embrace of the altruism that shines through every clause and those with vested interests will grab hold of each and every one.

Conversely, there are also inherent threats to invoke non-participatory adherence under the Human Rights Treaties that we are a signatory to.

Australia is one of the few countries that is dealing with both boat and air illegal entry over our borders.

Our successful policies have been developed through extensive experience and have balanced the rights of disparate groups.

Unfortunately, they do not receive due recognition in high places. Instead, pariah status is being heaped on legitimate attempts to resolve illegal incursion in a very complex environment.

During debates on the content of the GCM Australia repeatedly requested a clarification of a definition for “irregular migrants.” None were forthcoming – no surprise there.

Our refusal to accept the GCM as it is, will no doubt lead us further into pariah status. So be it! “Operation Sovereign Borders” remains in place.

Australia has benefitted considerably from migration. We are a country made up of mostly recent arrivals, many of whom were welcomed here post WWII under various programs.

These inclusions worked well and for the most part, participants were seamlessly melded into our emerging montage.

There have been many examples of large migration shifts. After the creation of the Dust Bowl in the mid west of the USA in the 1930’s large numbers of farm people abandoned their holdings and went west in search of survival.

In 1947 the island of Saibai in the Torres Strait was deemed to have fallen into a state where the inhabitants could no longer sustain themselves. They migrated to Cape York on the Australian mainland and settled in Barmaga and Seisia.

We undertook a massive project specific migration program after WWII to get the Snowy Mountain project completed. Thousands of families moved from the recent terror of Europe to take up work opportunities on that project. With very few exceptions they became Australians and make us – in part – what we are.

How Does All of This Affect Us?

In December 2018 Seventeen member states of the UN decided to either vote against the GCM, abstain from voting, or did not attend the session. Australia was one of these.

Whilst there were various reasons given by these non-supportive states there were four basics;

We have a strong migration policy that addresses our needs in a general sense, and targets specific skill sets that our needs dictate. It is administered under a visa program with various conditions applicable to each class of visa.

The “climate change” proponents, supported by the left media adherents, have created and continue to promote the lie that the sea levels are rising and in particular that they are rising in our neighbourhood.

We have also heard recent talk of Tuvalu taking Australia to the World Court for not abating CO2 emissions adequately to avoid the Sea Levels rising.

This has effectively created the potential for an influx of environmental migrants who are, or will be, looking for somewhere to migrate to, regardless of the accuracy of their concerns.

You can see for yourselves the current history of the Sea level in Tuvalu.

Australia has turned back many boats full of asylum seekers. As a result, we have saved many lives over the last few decades. The end result of this process is detention for people who cannot be processed adequately.

There is constant reference to detention as a last resort throughout both of these agreements. Australia has been forced into pariah status because of its adequate border security.

Not once have the concerted efforts (if there have been any) of the UN provided meaningful support.  There has of course been plenty of criticism.

There has also been a concerted effort by the Australian Government to garner intelligence on people smuggling by boat. This intelligence has allowed Australia to isolate threats and use deterrents to undermine the industry.

However, we recently saw that in a perceived advantage mode (the May elections) the industry can be ramped up very quickly.  Boat smugglers were eagerly expecting a different result and were preparing accordingly.