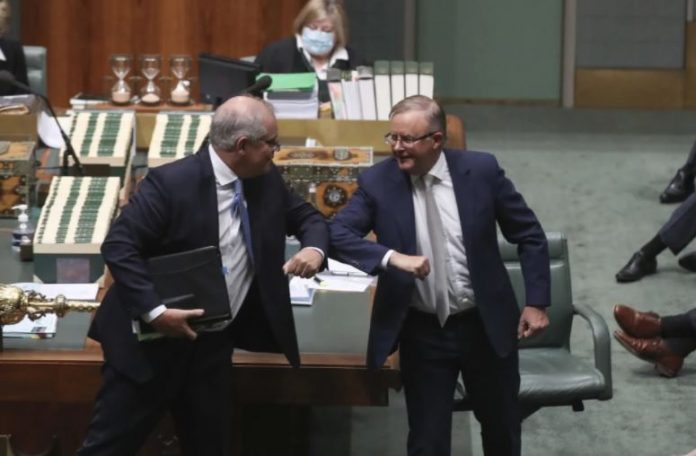 TO SAVE AUSTRALIA FROM ALBANESE

A month ago there were three possibilities for the Australian people:

There are no longer three choices for the Australian people. The South Australia Election result and recent polls each confirm that number two has disappeared as a choice. Morrison is heading for an historic crushing defeat, and Albanese is on track to become Prime Minister. We cannot avoid the former and we must prevent the latter.

Albanese will be even worse than Morrison. An Albanese Labor-Greens Government will crush the hopes of Australians through the destruction of small business and rapid cancellation of our remaining liberties, in a nation dragged down by burgeoning corruption, poverty, misery, chronic blackouts, elimination of major industries, mass surveillance with universal digital identity, imposition of death taxes, plunder of superannuation, robbery of bank accounts, and the abolition of cash.

There will be unprecedentedly high suicide rates coupled with plunging fertility rates, compulsory dangerous injections every three months or less, even for tiny babies, plus unchecked transformation of schools into propaganda centres hostile to parents.  Thousands of Australians will be starving, and every part of the nation will be inflicted with crime and lawlessness.  Australia will be incapable of national defence.

Within a decade or so, the remaining poor, sick, hungry and depressed Australians will become helpless serfs, the dispossessed vassals of the invading forces. Our rulers will not suffer, as their whole focus will be surrender on terms which guarantee their personal safety and continuing wealth.

Nothing can be done to save Morrison who is owned mind, soul and carcass by Big Pharma, and whose callous disregard for the victims of vaccine harm typifies his worthlessness.  The remaining Liberal loyalists should totally abandon Morrison, today, and immediately work for a Freedom Government, the sole hope for Australia’s people and Australia’s sovereignty.

Australia’s only prospect for peace, prosperity and progress is a Freedom Government led by Freedom Parties and Freedom Independents, all easily identified by their commitment to preference each other first, ahead of Liberal third last, Labor second last and Greens last of all.

Every person determined to support candidates who are steadfast in declaring “my How to Vote Card will recommend Liberals third last, Labor second last and Greens last”, must focus on the goal, which is to elect the maximum possible number of Freedom Candidates in the General Election, almost certainly on 14 May 2022.

To win Government we must establish a national network of Street Reps, each briefed to deliver material for the Freedom Candidates to letter boxes in their own street.  Those Street Reps will read the material they deliver, will swiftly grow politically, will meet and win over the residents of their own street, and will become effective as pre-poll workers and booth workers. The Street Reps will save Australia, residence by residence, street by street, suburb by suburb, and electorate by electorate.

Every Australian who cares about the future needs to get moving now. Find every email address you have ever used and every mobile phone number you have ever recorded. The whole nation needs to receive the Freedom Phone App so good folk everywhere can enrol as Freedom Street Reps.  Do not risk spending  the rest of your life cursing yourself for abject laziness and indifference to completing the task at hand.

The letterbox image in  Appendix A  (below) is the link to the Freedom Phone App.  Scan the QR code with your phone or ctrl+click, and the Freedom Phone App is yours. Start by using the App yourself to become a Street Rep. Nobody is too busy or too important to be part of saving Australia from the Albanese disaster.  Ways to share the App widely include:

The least result will be that your associates, friends and family will know that you care enough about Australia to take positive action. You will have your self-respect. You will set a valuable example for others. And you can win your country back.

A: Shop Window Sign and Link to the Freedom Phone App

B: Valuable links for Freedom Candidates and their Supporters

Shop Window Sign and Link to the Freedom Phone App

Share everywhere the link to the Freedom Phone App

Valuable Links for Freedom Candidates and their Supporters

PANDEMIC OF THE ‘VACCINATED’ IS UPON US! THE JABBED ARE...