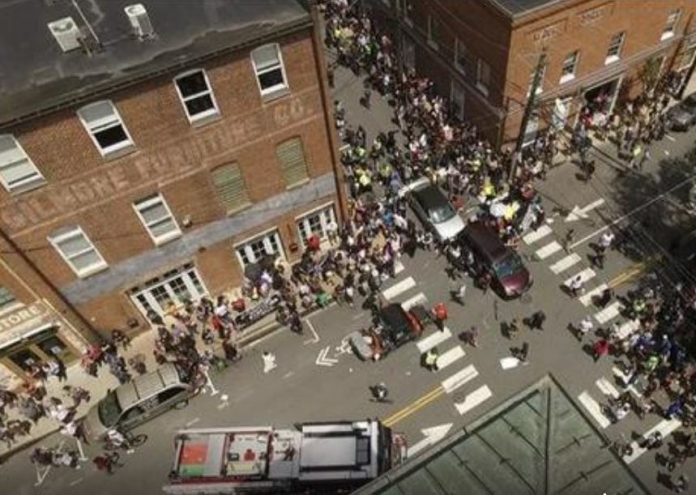 Here is the never-before-seen video from Charlottesville.

CLICK ON THE LINK BELOW TO VIEW IT. SORRY I COULDN’T EMBED IT

@ 10:40 you can see left-wing extremists flying Communist flags, celebrating the over 100 million who perished mercilessly under international Communism and its many socialistic variants.

@ 14:55 you can see a group of radical leftists, having attacked the pro-Lee protesters for most of the video, now form a human barricade across the street to prevent any other attendees from entering the park.

@ 17:15 you can see a pro-Lee group calling themselves the “Highwaymen” who are dressed distinctly in yellow attire, prevented from walking up the street by the barricade and you can see them try to snake their way through the hostile crowd. This crowd and arrangement is clearly set in place by the many police barricades ensuring a clash between the two groups.

@ 18:25, anti-Lee protester Corey Long, black male, who is shirtless with a white t-shirt around his neck, violently launches projectiles into Lee Park assaulting the pro-Lee participants. Long will later be found trying to set pro-Lee attendees on fire with an improvised flamethrower as they exit the park at the demand of the Charlottesville police.

@ 19:00 you can see the yellow “Highwaymen” snaking their way around a parked Charlottesville police car as they are shoved and otherwise abused by hostile anti-Lee protesters.

@ 19:10 you can see a man in a gray shirt throw some kind of liquid into the face of one of the passing “Highwaymen.”

@ 20:00 you can again see the group of prominent Communist flags that go unreported and unseen in most photos from the event.

@ 20:12 you can see the last in line of the “Highwaymen” is picked off by someone in the crowd and violently shoved to the ground.

@ 20:35 you can see the harassment and assault upon departing protesters by left-wing extremists in the bottom left of the screen, as the police march in to shut down the protest in the upper right. There was total legal impunity for the left to assault people trying to leave the location.

@ 23:26 you can see as Virginia State Police and Charlottesville Police push the protesters out of the park directly into the waiting crowd of Antifa and left-wing protesters. There was zero police crowd control of the left-wing elements. This set up a confrontation where one left-wing agitator tried to set departing protesters on fire.

@ 24:30 you can see the left and right throw projectiles at one another in street fighting, where the police look on uncaring and oblivious to the violence in front of them.

@ 26:20 the pro-Lee protesters have departed the upper left of the screen, and are being chased by radical left agitators. The police demanded that the pro-Lee people leave the park or be arrested, and yet the radical left agitators and Communists get to roam the same spaces and streets freely without risk of arrest. The double standard obvious on video is appalling.

@ 40:00 you can see the Antifa ‘black flag’ prominently carried around in the bottom right of the screen. You can see more black flags @ 41:50 in the upper left.

@ 47:27 you can see left-wing impromptu protests and gatherings in front of a line of 17 state police officers. The City of Charlottesville fought pro-Lee protesters for months in court, eventually losing in federal court, to have the right to a single protest at the Lee Memorial. Their protest lasted 90 minutes before the City shut it down. Leftists, on the other hand, had free rein to gather, protest, and agitate at will.

@ 1:10:12 you begin to see the forming mob of left-wing marchers through the street.

@ 1:12:02 you see the group of at least ten Communist flags in the bottom right, representing the over 100 million killed by Communist regimes in the past century, easily join the marauding left-wing mob.

@ 1:12:05 the mob stops at the intersection of Water Street and 4th Street for no clear reason. They are blocking traffic in all directions. They begin to chant, “Whose streets? Our streets!” according to other video from the ground at the same time.

@ 1:15:07 you can see there is a vehicle impact. This is the car allegedly driven by James Fields impacting and resulting in the eventual death of Heather Heyer. This is 3 minutes after the protesting marchers arrive at the intersection and begin blocking it.

Litigation from the Charlottesville “Unite the Right” rally has been going on for almost four years. Much of the litigation revolves around the death of Heather Heyer, a left-wing protester who was allegedly hit by a car driven by James Fields. Heyer, who was 4’11 and weighed 330 pounds, severed an artery as an internal injury after being impacted and died en route to the hospital. Nearly 35 others were injured in the car crash, five of whom were considered critical.

Fields faced the death penalty in both the state of Virginia and in federal court, and likely took a plea to escape the prospect of lethal injection.

This rally was one of the first major events to demonize the then early Trump administration with largely made-up quotes, made-up ‘fact checks’ and a level of shameful media malpractice.

The most common left-wing meme is that Trump referred to neo-nazis as ‘very fine people’ when, instead, he said that some of the pro-Lee protesters were fine people who deserved the protection of the law. Left-wing media continues to push this disinformation and ignore the context of Trump’s remarks, even though extreme-left fact check group Lead Stories debunked the left-wing claim.

The media originally tried to blame the helicopter crash deaths of two Virginia State Police officers, including one long-time agent assigned to Democrat Governor Terry McAuliffe, as being somehow caused by the rally. Headlines were careful to blame the rally for causing the deaths of three, even though it was most likely the gross negligence and deliberate malicious actions of government officials that directly caused each death.

The media completely ignored the presence of non-extreme elements within the pro-Lee protesters who were seeking to preserve their cultural and historical heritage and instead labelled them all as nazis.

The media blamed the pro-Lee protesters as causing all the violence during the protest, when all the video and photographic evidence to date shows that the Antifa-led attacks instigated and repeatedly provoked violence.

Rally organizer Jason Kessler said of the footage, this “drone footage clearly shows the permitted protesters trying to peacefully enter and eventually exit the venue and getting attacked by a Leftist mob while the police stood behind barricades and watched.”

“When we look back at this historic event we need to look at more than just the offensive speech and fights between rival protest groups. Why didn’t the government try to separate the groups and when are we going to get some accountability from the officials who turned a free speech rally into a deadly trap?”

The videographer tells the Gateway Pundit that no one, law enforcement or otherwise, has seen his full drone footage from the Unite the Right rally on August 12, 2017 until now.

We have more analysis we are currently working on.

Article by Ben Wetmore at The Gateway Pundit