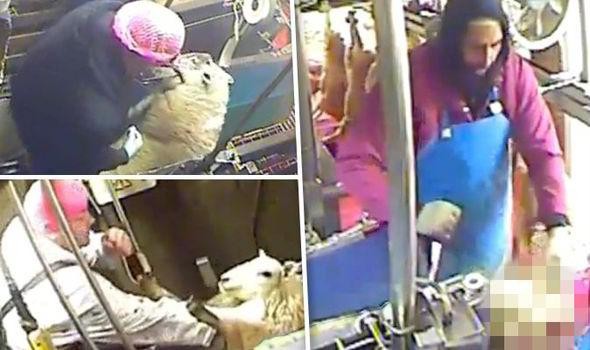 Horrific footage has emerged of "vicious attacks" at a halal slaughterhouse where animals had their throats hacked at with saws. Other footage shows sheep being kicked in the face by staff and a worker standing on the neck of a conscious animal.

Were these slaughtermen Presbyterian? No. Catholic? No. Buddhist monks? No. They were Muslim-only slaughtermen employed at the Bowood Lamb abattoir in Thirsk in North Yorkshire.

The news reports go on to state emphatically that this is strictly forbidden and against Sharia Law.

They say it has nothing to do with Islam. Oh dear, how thick do they think we are? They try to pin the responsibility on the government appointed vets. Or the company itself.

It doesn’t matter which halal authority or agency you look up, they all say the same thing.

The Islamic Council of Western Australia says, “The slaughterman must be a mature, pious Muslim of sound mind who understands fully the fundamentals and conditions relating to Halal slaughter and be approved by the religious authorities.”

The Islamic Coordinating Council of Victoria says, “ Halal slaughter should be performed only by a Muslim (not Kitabi or others) who is sound of mind, mature and who fully understands the fundamental rules and conditions related to slaughter of animals is Islam.”

The Food Standards Agency in the UK says, “The slaughter man must be a Muslim, who has beenproperly trained and licensed.”

If cruel practices are being uncovered start with the obvious. We are talking about Islamic ritualistic halal slaughter methods. It is done by supposedly mature, pious, educated Muslim only men. It is not rocket science friends. Investigate this and start with the barbaric religious practices that refuse to be drawn into the modern age.

And it is not Presbyterianism.

This is not pretty: http://www.express.co.uk/news/uk/555768/Halal-slaughterhouse-Muslim-Islam-animal-welfare