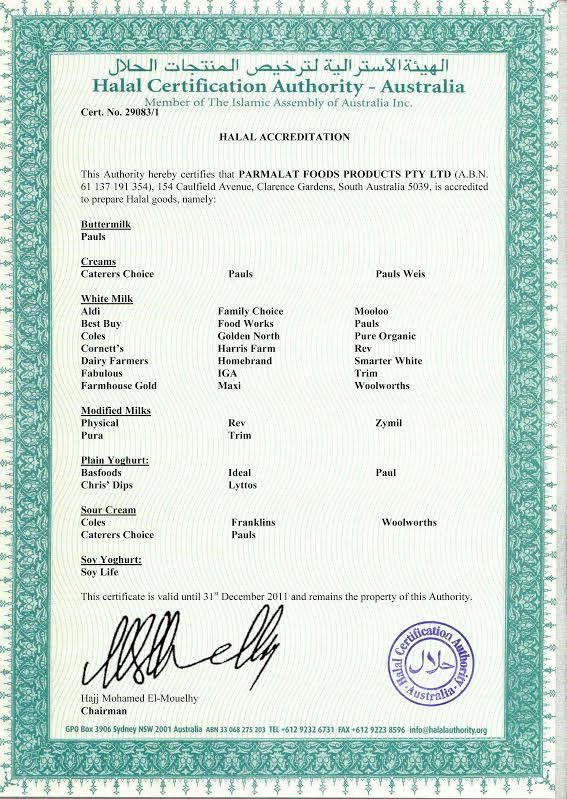 There is a lot of confusion about supermarket meat and whether or not it is halal certified. The thing is in a lot of cases the meat they source is in fact halal slaughtered and fees are paid. The supermarkets cannot label the meat as such though because the meat is then transported, stored or sold along with haram (forbidden) items such as pork.

So who wins? No-one, except the rich certifiers. Many non-Muslims won't buy the end product because it was slaughtered halal and fees were paid.

Many Muslims won't buy it because it may have started out halal but became haram along the way.

Many people are also concerned about the supermarket brands of every day staples such as bread and milk. In 2011, I asked Woolworths and Coles if these items were halal certified and I was assured they were not.

This is an interesting tid bit considering how often halal agencies and companies insist that halal certification doesn’t increase the cost to the consumer. Of course it does, it would never make good business sense to absorb costs instead of passing them on to the consumer.

The supermarkets say they want to keep costs down on these items so they don’t pay any kind of certification fees.

Imagine my confusion and anger then when I saw this halal certificate that clearly states Homebrand milk for Coles and Woolworths is halal certified. It also lists IGA, Aldi and Foodworks.

I have viewed similar certificates for Homebrand bread and even nuts! Many of these certificates have now been removed from the websites because of consumer backlash but as far as I understand they still pay for certification.

Despite the fact these products are already halal without need for certificates, it is outrageous that these suppliers pay the fees, they don’t display it on their labels and in fact the product doesn’t end up halal anyway.

With chicken processors paying around $40,000 per annum, some abattoirs paying $27,000 a month and milk companies paying tens of thousands a year the consumer is the BIG loser!

But at least someone's wife has a lot of nice shoes.