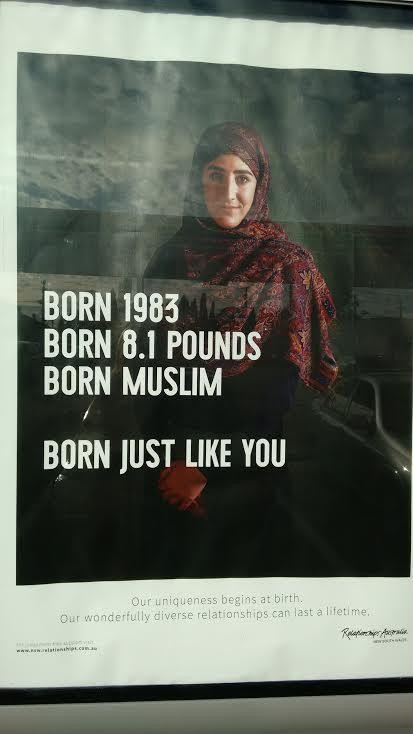 On my 4 hour drive home yesterday I stopped at the 7 Eleven Heatherbrae, NSW, (near Newcastle) for fuel. This was the poster confronting me as I filled up.

I appreciate the sentiment that we are indeed valuable as individuals and we certainly can all have meaningful relationships. Our number 2 policy is Integration not Separation. But this poster does not help.

The clothing this woman wears is divisive and oppressive. This Islamic garb is a statement on a number of levels.

It reinforces the Islamic notion that men are base animals who can't control their primal sexual urges and women must cover up to protect themselves from such a threat.

Most men in Australia are self controlled and decent human beings who don't rape, assault, hurt or disrespect women.

There are dangerous men in all countries but on the whole women in this great country are safe to wear what they like and interact with men without being threatened. The photo here communicates oppression under Islam.

Despite some loud and proud Muslim women declaring the freedom they experience wearing such coverings there is a large group of Muslim women who cannot vocalise their disdain for fear of punishment and alienation.

Last year during a "No Hijab Day" campaign on social media, many Muslim women shared how much they despise wearing such clothing, that they feel alienated, oppressed and subjugated.

This poster also says "Born Muslim: Born Just Like You".

That is misleading and it omits some important facts.

Many Muslims live in fear of exactly that if they renounce Islam. I have personally met Muslims who live in fear of family members killing them or punishing them for leaving Islam. Honour killings do happen.

Muslims are ostracised and alienated, here in Australia, by their families and communities if they reject Islam. This is not freedom. It is not right, it is not just and it is not acceptable in our warm, tolerant, multi-ethnic integrated society.

Religious freedom is not just about being able to pray, read texts or follow a prophet. It must include the ability for an individual to choose or reject ideologies. To leave a faith they were born into if they want to.

Campaigns to change perceptions and attitudes should focus on how Muslims can integrate and accept our ways, our clothing, our food customs, our religious freedom, and our multi-ethnic society.

This campaign is an attempt for us to accept oppression – well I for one won't submit to that.

I stand for integration not separation.

I stand for religious freedom!

WHO KILLED THE KENNEDYS? PART 1