WHO KILLED THE KENNEDYS? Part 1 (richardsonpost.com)

WHO KILLED THE KENNEDYS? PART 3 (richardsonpost.com)

Robert had planned to run for the American Presidency in 1972, but the escalation of the Vietnam War precipitated his decision to run in 1968.

Another factor may have been the opening of the investigation by New Orleans District Attorney Jim Garrison in 1967.

Garrison was allowed to view Abraham Zapruder’s amateur film, confiscated by the FBI on the day of the assassination.

This film, despite evident tampering, shows that the fatal shot came from the “grassy knoll” well in front of the President, not from the School Book Depository located behind him, where Oswald was supposed to be shooting from.

When talk of the investigation began, Kennedy asked one of his closest advisors, Frank Mankievitch, to follow its developments, “so if it gets to a point where I can do something about this, you can tell me what I need to know.”

He confided to his friend William Attwood, then editor of Look magazine, that he, like Garrison, suspected a conspiracy, “but I can’t do anything until we get control of the White House.”[8]

He refrained from openly supporting Garrison, believing that since the outcome of the investigation was uncertain, it could jeopardize his plans to reopen the case later, and even weaken his chances of election by construing his motivation as a family feud.

In conclusion, there can be little doubt that, had he been elected president, Robert Kennedy would have done everything possible to reopen the case of his brother’s assassination, in one way or another.

This fact certainly did not escape John’s murderers. They had no other option but to stop him.

This first conclusion is a sufficient reason to conduct a comparative analysis of both Kennedy assassinations in search of some converging clues that might lead us to the trail of a common mastermind.

We begin with Robert’s assassination.

Sirhan Sirhan, a Palestinian motivated by hatred of Israel?

Just hours after Robert’s assassination, the press was able to inform the American people, not only of the identity of the assassin, but also of his motive, and even of his detailed biography.[9]

Twenty-four-year-old Sirhan Bishara Sirhan was born in Jordania, and had moved to the United States when his family was expelled from West Jerusalem in 1948.

After the shooting, a newspaper clipping was found in Sirhan’s pocket, quoting favorable comments made by Robert regarding Israel and, in particular, what sounded like an electoral commitment:

“The United States should without delay sell Israel the 50 Phantom jets she has so long been promised.”

Handwritten notes by Sirhan found in a notebook at his home confirmed that his act had been premeditated and motivated by his hatred of Israel.

That became the story line of the mainstream media from day one. Jerry Cohen of the Los Angeles Times wrote a front page article, saying that Sirhan is “described by acquaintances as a ‘virulent’ anti-Israeli,” (Cohen changed that into “virulent anti-semite” in an article for the The Salt Lake Tribune), and that: “Investigation and disclosures from persons who knew him best revealed [him] as a young man with a supreme hatred for the state of Israel.”

Cohen infers that “Senator Kennedy […] became a personification of that hatred because of his recent pro-Israeli statements.” Cohen further revealed that:

“About three weeks ago the young Jordanian refugee accused of shooting Sen. Robert Kennedy wrote a memo to himself, […]

The memo said: ‘Kennedy must be assassinated before June 5, 1968’—the first anniversary of the six-day war in which Israel humiliated three Arab neighbors, Egypt, Syria and Jordan.”[10]

After September 11, 2001, the tragedy of Robert’s assassination was installed into the Neocon mythology of the Clash of Civilizations and the War on Terror story.

Sirhan became a precursor of Islamic terrorism on the American soil.

In a book entitled The Forgotten Terrorist, Mel Ayton, who specializes in debunking conspiracy theories, claims to present “a wealth of evidence about [Sirhan’s] fanatical Palestinian nationalism,” and to demonstrate that “Sirhan was the lone assassin whose politically motivated act was a forerunner of present-day terrorism” (as written on the back cover).

In 2008, on the 40th anniversary of Robert’s death, Sasha Issenberg of the Boston Globe recalled that the death of Robert Kennedy was “a first taste of Mideast terror.” He quotes Harvard professor Alan Dershowitz (best known as Jonathan Pollard’s lawyer), as saying:

“I thought of it as an act of violence motivated by hatred of Israel and of anybody who supported Israel. […] It was in some ways the beginning of Islamic terrorism in America. It was the first shot. A lot of us didn’t recognize it at the time.”[11]

The fact that Sirhan was from a Christian family was lost on Dershowitz. The Jewish Forward took care to mention it on the same occasion, only to add that Islamic fanaticism ran in his veins anyway:

“But what he shared with his Muslim cousins — the perpetrators of September 11 — was a visceral, irrational hatred of Israel. It drove him to murder a man whom some still believe might have been the greatest hope of an earlier generation.”

“Robert Kennedy was the first American victim of modern Arab terrorism,” the Forward journalist hammered; “Sirhan hated Kennedy because he had supported Israel.”[12]

This leitmotiv of the public discourse begs the question: Was Bobby really a supporter of Israel? But before we answer that question, there is one more pressing one: Did Sirhan really kill Bobby? 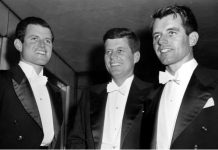