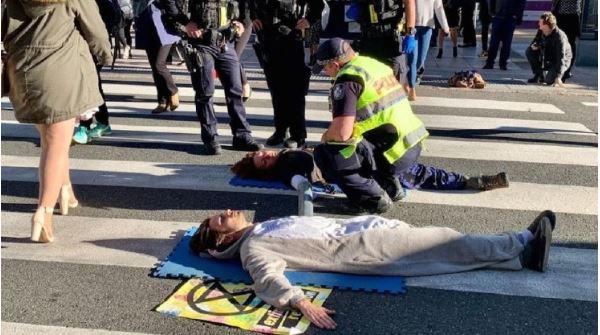 For some time now, we have been told that climate change is a clear and present danger and that we must act right now, or extinction of the human race will occur within a very short period of time.

Not might occur, mind you. Will occur. Proponents of this argument are in absolutely no doubt that this imminent catastrophe has been brought about by human activity. This is, of course, pure bunkum.

Some of the more extreme opinions in this area suggest we are heading for disaster in the next two or three years. The end is nigh.

If that occurs, the recent proclamation from the Greens makes an interesting challenge. They will use, and you’ll excuse the pun, whatever power they may have to ensure we have a 100% renewable power supply and a halt to thermal coal exports by 2030.

If their dire predictions are right, I’m not sure how that will occur as we will have all ceased to exist eight years prior.

There have been countless not-negotiable deadlines imposed on humanity over time and very few, if any, have actually come to pass.

Peak oil is a great example. Doomsday forecasters suggested that in the 1970’s, the world would reach a point where the availability of crude oil would peak and then diminish rapidly as it is a finite resource.

When it did not happen, the scientific argument switched to peak oil demand. We are still waiting for that, but fingers are resting on panic buttons to be sure.

Certainly, the numerous “end of days” predictions over the years have never proven true. Last time I checked; we are still here.

In these critical times, we must immediately mend our ways, we are told. Stop mining and burning coal, they shout. Stop eating meat, kill all cows, sheep, goats, etc and switch to a plant-based diet.

Construct more of those bird-slaughtering wind powered turbines and install more and more solar panels. Oh, and smite the unbelievers while you’re at it. Glue yourself to a road to prove your point.

Better still, strip down to your underwear and parade about shouting slogans and holding up banners displaying a symbol which is curiously reminiscent of a swastika.

Makes you think, doesn’t it? What could possibly justify such demands and behaviours?

The science! Actually, I’ve left out a very important adjective there. The settled science. The type of science where no further science is required.

For those that argue in favour of man-made climate change, the science is now at a point – and has been for a long time – where the theory is proven. That’s what they mean when they say settled.

Anything that does not suit the conventional wisdom shared by the group-thinking set is called junk science.

You need only read the incomparable Viv Forbes on this very site, to hear some of the compelling counter arguments against man-made climate change.

For the life of me, I cannot work out how the theory has become the reality in the face of these facts. Nonetheless, that is where we find ourselves.

Over recent years, this self-same crowd of climate loonies have also shown themselves to be arch manipulators of the science.

They take scientific data and twist it to suit their argument. Critical thinking and reasoned analysis are replaced by shouting, shaming and shenanigans.

A striking example of this is evident in the stance that gender is a fluid concept. A social construct, if you will.

Yet, we are told that this science must be disregarded as people’s gender can only be determined by how the person perceives themselves and their own gender identity.

Who tells us this? You won’t be surprised to find it is typically the same people who spuriously claim that the man-made climate change is indisputable fact.

It is certainly an interesting dichotomy which tends to invalidate their own climate eco-babble argument.

They claim the climate facts are not in dispute and all must believe. Yet, genetic science on gender determination is actually settled but must no longer be accepted.

Come to think of it, there must be some science behind gluing oneself to a road. I wonder if that’s settled.