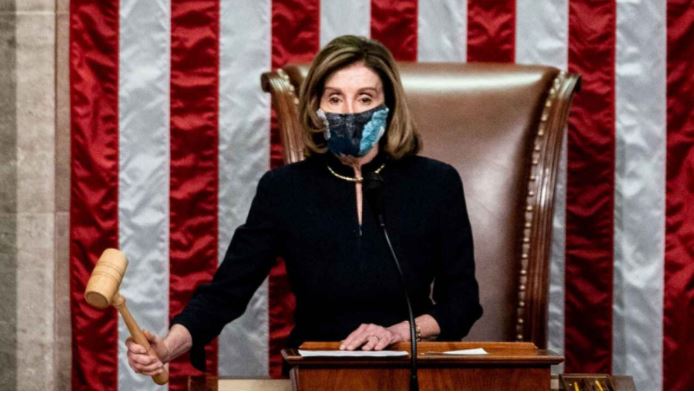 Fanatical Dems impeach President Trump for the second time — and again without evidence.

With mere days before a new president takes office, leftist Democrats and useful-idiot Republicans voted Wednesday to impeach President Donald John Trump on false grounds for a second time, a move that places the United States on a fast-track toward banana-republic status.

The vote to impeach on January 13 was 232 to 197. Ten Republican lawmakers voted to betray their own party and impeach President Trump.

The reason why they did this is clear: despite everything that has happened, Trump’s voters are standing by him. That makes him a threat –not to the republic, as the Left claims— but to the deep state-globalist-socialist-communist alliance that in a few days will control both the executive and legislative branches of the federal government. They want Trump out of the picture so things can return to so-called normal. Even if they can’t get the impeachment trial underway in the Senate before Trump leaves office at 12 Noon on January 20, they want the Senate to convict the president and bar him from seeking office again. Some legal scholars, though, notably not Alan Dershowitz, say a president leaving the office does not deprive the Senate of jurisdiction to hear the case.

As much as it pained the often-manic Frank Luntz, the Trump-hating pollster, to admit, “Despite their criticism of his conduct since November 3rd and last week, 91% of Trump voters say they’d still vote for him if another presidential election were held today.”

“73% of Trump voters still say the election system is ‘rigged,’ even after being reminded that Trump and his allies lost more than 60 cases in court challenging election results,” a glum Luntz wrote January 11 in a tweet.

In addition, 78 percent of the respondents said they agreed with the president’s claim that the election was “stolen” from him, and 67 percent said Trump would be the winner if the votes were “counted accurately and fairly.”

So after everything the anti-Trump conspirators and the universe have thrown at the president since his wild ride began on the escalator at Trump Tower in Manhattan on June 16, 2015 –including but not limited to claims of racism, white nationalism, sexism, sexual abuse, ripping off customers, investors, and creditors, Spygate, Hillary Clinton’s phony Russian dossier and the never-ending fantasies of Russian collusion in the 2016 election, Charlottesville unrest and the lie that he praised neo-Nazis, sanctuary cities and states, Antifa riots, Black Lives Matter riots, Capitol Hill Autonomous Zone (CHAZ) riots in Seattle, tax allegations, claims of being a greedy businessman, claims of being an incompetent businessman, social media totalitarianism, claims of illegal emoluments, porn stars and models, dishonest fact-checkers, COVID-19, and the innocent conversation with Ukraine’s president that got him impeached the first time— Trump is still riding high in the eyes of his base.

The impeachment vehicle this time was House Resolution 24, which was introduced in the House of Representatives January 11. It is a series of lies, half-truths, and political spin.

The single article of impeachment states that Trump “engaged in high Crimes and Misdemeanors by inciting violence against the Government of the United States.”

The resolution continues, stating that in the months preceding the January 6 joint session of Congress convened to count the votes of the Electoral College, “President Trump repeatedly issued false statements asserting that the Presidential election results were the product of widespread fraud and should not be accepted by the American people or certified by State or Federal officials.”

Not long before the joint session got underway, Trump addressed a crowd at the Ellipse outside the White House and “reiterated false claims that ‘we won this election, and we won it by a landslide.’”

Trump “also willfully made statements that, in context, encouraged—and foreseeably resulted in—lawless action at the Capitol, such as: ‘if you don’t fight like hell you’re not going to have a country anymore.’ Thus incited by President Trump, members of the crowd he had addressed, in an attempt to, among other objectives, interfere with the Joint Session’s solemn constitutional duty to certify the results of the 2020 Presidential election, unlawfully breached and vandalized the Capitol, injured and killed law enforcement personnel, menaced Members of Congress, the Vice President, and Congressional personnel, and engaged in other violent, deadly, destructive, and seditious acts.”

“President Trump’s conduct on January 6, 2021, followed his prior efforts to subvert and obstruct the certification of the results of the 2020 Presidential election. Those prior efforts included a phone call on January 2, 2021, during which President Trump urged the secretary of state of Georgia, Brad Raffensperger, to ‘find’ enough votes to overturn the Georgia Presidential election results and threatened Secretary Raffensperger if he failed to do so.”

In fact Trump didn’t demand that Raffensperger tamper with election results or threaten him. A leaked recording of the telephone call revealed that Trump merely informed Raffensperger, a fellow Republican, of how many votes the president needed to win Georgia.

“In all this, President Trump gravely endangered the security of the United States and its institutions of Government,” the resolution absurdly states.

“He threatened the integrity of the democratic system, interfered with the peaceful transition of power, and imperiled a coequal branch of Government. He thereby betrayed his trust as President, to the manifest injury of the people of the United States.

“Wherefore, Donald John Trump, by such conduct, has demonstrated that he will remain a threat to national security, democracy, and the Constitution if allowed to remain in office, and has acted in a manner grossly incompatible with self-governance and the rule of law. Donald John Trump thus warrants impeachment and trial, removal from office, and disqualification to hold and enjoy any office of honor, trust, or profit under the United States.”

The Kafkaesque resolution, in effect, criminalizes following existing lawful processes for disputing elections and deprives the president of his free speech rights by characterizing legitimate means of participating in public debate as somehow illicit.

It strangely argues that Trump telling supporters at a pep rally to “fight like hell” was an example of incitement. Of course the Democrats don’t bother to provide a legal analysis explaining their theory that telling someone to “fight” constitutes incitement because they can’t.

“Incitement” has a specific legal definition in the Supreme Court’s landmark 1969 ruling in Brandenburg v. Ohio. The conduct complained of must be both “directed to inciting or producing imminent lawless action” and be “likely to incite or produce such action.”

As I previously showed, the president did not incite violence in his speech. If anything, he urged his supporters at the rally in question to remain calm and peaceful.

The resolution also fails to take into account that Biden’s come-from-behind victory after Trump was solidly ahead in battleground states the morning after Election Day, was a statistical impossibility.

Economist Charles J. Cicchetti calculated that “[t]he probability of former Vice President Biden winning the popular vote in the four Defendant States—Georgia, Michigan, Pennsylvania, and Wisconsin—independently given President Trump’s early lead in those States as of 3 a.m. on November 4, 2020, is less than one in a quadrillion, or 1 in 1,000,000,000,000,000.”

For Biden “to win these four States collectively, the odds of that event happening decrease to less than one in a quadrillion to the fourth power,” according to a brief Texas filed with the Supreme Court last month in an unsuccessful attempt to challenge the election results in battleground states.

But facts don’t matter to radicals who view truth as subordinate to politics.

Massachusetts Democrat and socialist Jim McGovern, chairman of the House Rules Committee, opened debate in the House by declaring, “We are debating this historic measure at an actual crime scene,” a reference to the fact that apparent Trump supporters and Antifa ran amok in the chamber, forcing those inside to take cover.

McGovern said Congress was disrupted as it carried out one of its key responsibilities, certifying the election.

“But at a rally just a mile and a half down Pennsylvania Avenue, Donald Trump and his allies were stoking the anger of a violent mob,” McGovern said. “A member of this very body proclaimed on that stage, ‘Today is the day American patriots start taking down names and kicking ass,’” a reference to a rally speech delivered by Rep. Mo Brooks, an Alabama Republican.

“Trump told the crowd, ‘We’re going to have to fight much harder. You will never take back our country with weakness,’” McGovern said, quoting Trump’s completely ordinary, perfectly lawful political rhetoric.

“The symbol was unmistakable. These thugs should stage a coup, so Donald Trump can hang on to power, the people’s will be damned. This beacon of democracy became the site of a vicious attack,” the congressman said.

No one, including McGovern by the way, has ever bothered to explain how capturing the Capitol during the counting of the electoral votes, if that’s what those who ran amok in the complex planned to do, would constitute a coup. Without control of the armed forces and police, it is difficult to imagine any raiders seizing control of the government and making it do what they desire. Real coups can be quite complex. Even if they had taken, say, Vice President Mike Pence and other elected officials hostage, that wouldn’t have prevented the government from functioning. So the coup theory has many holes in it.

He thinks that he can take plain words and expressions that people routinely use in politics and make them seem sinister, turning them into magical words capable of making a mob of Trump supporters angry enough to storm a building.

“This was not a protest,” McGovern said. “This was an insurrection,” he said, ignoring all the damage Antifa and Black Lives Matter inflicted on American cities over the past year.

“This was a well-organized attack on our country that was incited by Donald Trump. Domestic terrorists broke into the United States Capitol that day, and it’s a miracle more people didn’t die. As my colleagues and I were being evacuated to safety I never, ever will forget what I saw when I looked into the eyes of those attackers right in the speaker’s lobby there. I saw evil, Mr. Speaker.”

Or maybe McGovern and his fellow America-hating radicals were looking in a mirror.

Doubling Down on Impeachment Insanity | Frontpagemag