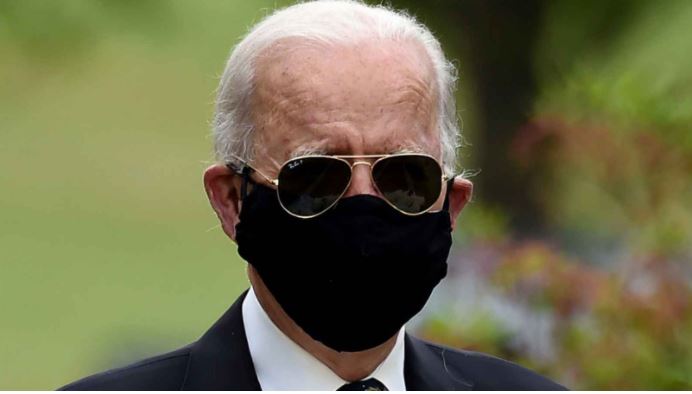 Joseph Robinette Biden Jr., 78, was installed North Korea-style as the placeholder president of the United States of America on January 20, surrounded by 25,000 U.S. troops, along with hundreds of socially-distancing well-wishers in front of an empty National Mall populated with a vast forest of planted American flags to distract from the fact that no one was there.

How long he will last before Nancy Pelosi invokes the 25th Amendment to replace him with the predatory Obama wannabe Kamala Harris is anyone’s guess.

The speech came as the Washington Post admitted hours after militia members were charged in connection with the January riot that former President Donald Trump had nothing to do with the civil disturbance that delayed our Potemkin parliament’s certification of electors a few hours.

This was, of course, the riot after which Biden, statist simpleton that he is, scolded lawmakers who thought they were running for their very lives for not stopping to put face masks on.

In the process Biden misgendered his own home state House member, saying he was “so proud of my congressman right here in the state of Delaware, Lisa Blunt Rochester,” for trying to distribute masks to other lawmakers during the riot. Reportedly, some Republicans declined the offer, prompting Biden to growl, “What the hell’s the matter with them? It’s time to grow up.”

No one needed to worry about riots in the nation’s capital, not only because of the armed soldiers and out-of-state police that occupied the city, but because the nonentity who blundered his way into becoming the leader of the free world does not inspire passion, except perhaps in the most radical precincts of the Left.

While he enjoyed his first half-day in the Oval Office busily trying to erase the legacy of Orange Man Bad by executive fiat, mostly peaceful Antifa rioters marked the occasion in Seattle, Denver, and Portland, Oregon.

The man who administered the oath of office to Biden, Chief Justice John Roberts, is arguably largely responsible for Biden’s so-called victory because he signed on to a series of decisions that ignored election law and put Trump, whom he hates with a passion, at a disadvantage.

In one case, on October 19, 2020, Roberts inexplicably betrayed his own oath of office by voting with the three liberal justices to refuse a stay in Republican Party of Pennsylvania v. Boockvar.

With only eight justices on the Supreme Court at the time, this resulted in a tie 4-4 vote denying a Republican request to stay the Pennsylvania Supreme Court’s blatantly unconstitutional ruling that usurped the power of the state legislature and forced state election officials to accept mail-in ballots received up to three days after Election Day.

The GOP presciently argued the extra time was an invitation to fraud, especially because the Pennsylvania court ruled election officials had to accept ballots late even if they lacked a postmark.

Roberts ignored the Electors Clause of the U.S. Constitution, which vests the power to determine state election procedures in state legislatures alone.

Article II of the Constitution provides that “Each State shall appoint [electors for president and vice president] in such Manner as the Legislature thereof may direct.” The courts have long held that the legislative power here is “plenary,” meaning unqualified and absolute, so when the Pennsylvania Supreme Court acted it did so unconstitutionally.

The Supreme Court ruled in McPherson v. Blacker (1892) that “the appointment and mode of appointment of Electors belong exclusively to the states under the constitution of the United States.”

“The legislative power is the supreme authority except as limited by the constitution of the State, and the sovereignty of the people is exercised through their representatives in the legislature unless by the fundamental law power is elsewhere reposed.”

The Supreme Court affirmed this legislative power as recently as 2000 in Bush v. Gore.

When Florida lawmakers saw that Democrat Al Gore was trying to steal the election by gaming the courts, they threatened to ignore the statewide popular vote and appoint electors pledged to Republican George W. Bush.

The Supreme Court reminded the litigants that state legislatures have the final say. “The individual citizen has no federal constitutional right to vote for Electors for the President of the United States…”

But instead of following the law, Roberts decided to stick it to the Trump campaign and snuff out any momentum his campaign might have had a chance of developing in courts across the nation.

Eager to get started destroying the American republic, the cadaverous former vice president was sworn in at 11:48 a.m., 12 minutes before Noon when the 20th Amendment specifies an incoming president’s term actually begins.

Squinting, and at times barking out the words on the teleprompter like someone with a wildly malfunctioning hearing aid, the newly inserted chief executive stumbled over a text that was weighted down with clichés, sentence fragments, and what passes for patriotism in Democratic Party circles. It was a bargain-basement inaugural address.

A co-conspirator in the ultimately successful four-year-plus-long rolling coup that used, among other things, Hillary Clinton’s fake Russian dossier and taxpayer-funded U.S. intelligence agencies to undermine the duly elected 45th president of the United States, the corrupt, lying serial plagiarist, groper of females of all ages, and hair sniffer, outlined his planned assaults on economic freedom, the First and Second Amendments, as well as the coming wave of repression directed against his enemies.

“Few people in our nation’s history have been more challenged, and found a time more challenging or difficult than the time we’re in now,” Biden said.

“A once-in-a-century virus that silently stalks the country. It’s taken as many lives in one year as America lost in all of World War II. Millions of jobs have been lost. Hundreds of thousands of businesses closed.

A cry for racial justice some 400 years in the making moves us. The dream of justice for all will be deferred no longer. A cry for survival comes from planet itself. A cry that can’t be any more desperate or any more clear now. A rise in political extremism, white supremacy, domestic terrorism that we must confront and we will defeat. To overcome these challenges – to restore the soul and to secure the future America – requires so much more than words.”

Words are not enough.

Doing what Biden and his far-left base want to do requires brute force because sane Americans won’t allow it. Normal Americans oppose slavery reparations paid by people who never owned slaves to people who were never slaves.

The Chinese Communist Party-promoted virus that causes the disease COVID-19 has ravaged the land, if the questionable official body count for the disease is to be believed.

Biden, who refuses to blame the People’s Republic for its murderous biological attack, wants to expand on the failed containment policies including universal mandatory mask-wearing and continuing the economy-killing lockdowns that have thrown millions out of work. He wants to use more force to compel compliance with pandemic mitigation efforts.

America is systemically racist, argued Biden, who for most of last year’s nationwide Antifa-Black Lives Matter riots following the drug-caused death of George Floyd remained silent about the lawlessness and destruction as his bloodthirsty running-mate Kamala Harris cheered them on, saying they “should not let up.”

In the hours after taking the oath, Biden rescinded President Trump’s executive order banning Marxist-invented Critical Race Theory in federal training, and killed his 1776 Commission that sought to move American education away from a Howard Zinn-style curriculum that unduly emphasized race-related injustices of the past.

Biden previously endorsed the communist Green New Deal which would return the United States to the 1800s in a few years, so unsurprisingly he falsely claimed that the environment was in grave danger in his speech. The Green New Deal “is a crucial framework for meeting the climate challenges we face,” his campaign website states.

Joe “You Ain’t Black” Biden’s ominous statement that “political extremism, white supremacy, domestic terrorism” are on the rise and must be confronted should be particularly worrisome to anyone concerned about civil liberties. This is because we know he wasn’t referring to his friends on the Left. He was smearing 75 million Trump voters as potential enemies of the state.

The leftists who run the Democratic Party believe that anyone outside of their ranks is a potential enemy. And they have funny ideas about what constitutes racism. Remember that when principled conservatives opposed Barack Obama’s socialist juggernaut they were reflexively denounced as racist. The only reason to oppose Obama was “racism – straight up,” washed up actress Janeane Garofolo whined at the time.

The activists of the Tea Party movement who filled townhall meetings as Obama and Biden were forcing Obamacare down the throats of the American people, were similarly denounced at the time by leftists as domestic terrorists.

Biden obviously plans to apply the label to Trump supporters to discredit and marginalize them, along maybe with throwing some of them into prison for their political beliefs if he can get away with it . And since some of the January 6 rioters had military backgrounds, he is already setting in motion a disturbing Stalinist-style purge of the armed forces.

Then there was the Orwellian part of Biden’s address in which he seemed to be outlining plans for a new Thought Police or maybe a citizen-dominated Thought Militia.

Biden said, “we must reject the culture in which facts themselves are manipulated and even manufactured.”

“Recent weeks and months have taught us a painful lesson. There is truth and there are lies. Lies told for power and for profit. And each of us has a duty and a responsibility, as citizens, as Americans, and especially as leaders – leaders who have pledged to honor our Constitution and protect our nation — to defend the truth and defeat the lies.”

This sounds much like Barack Obama urging his supporters to “get in the face” of his opponents.

The ”lies” to which Biden refers concern the justified worries of Americans about election fraud. Anyone who says Biden or the Democrats stole the election from Trump may be targeted in some way. As I wrote earlier this week, Republican lawmakers and lawyers are the first to be attacked but more harassment and persecution are coming.

And this supposed duty to defend truth and defeat lies isn’t something the Founding Fathers would have recognized. They believed, in the words of the Declaration of Independence that exalted “life, liberty, and the pursuit of happiness.” Americans are supposed to be free to believe what they want.

People have to be left alone to figure out the world for themselves, without compulsion from the government or politically correct censorship at the hands of Mark Zuckerberg’s 12-year-old content moderators jam-packed into electronic sweatshops.

Joe Biden will never get that.

And his inability to comprehend this quintessential aspect of what it is to be American is going to get people killed.