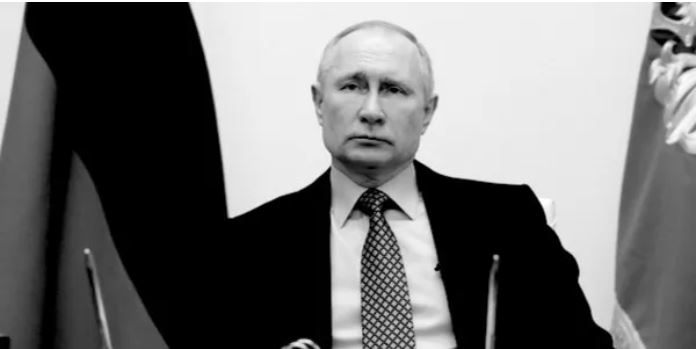 AFTER two years of Covid-19 insanity, the West has several new crises to deal with. Rampant inflation, coming food shortages and fuel shortages, monkeypox, a mystifying confusion about XX and XY chromosomes and a strange war in Ukraine which appears to be a proxy war between nuclear armed America and nuclear armed Russia.

I say a strange war because no one seems remotely interested in stopping it, no matter that it could lead to Armageddon. I think this is because Putin can be blamed for some of the deliberately engineered crises we are currently experiencing, so don’t expect it to end soon.

Our armchair warrior political class seems more than happy to supply weapons to prolong the inevitable and are valiantly prepared to fight to the last surviving Ukrainian.

I feel as though we no longer exist as human beings in the eyes of our overlords. We are now just cattle being herded toward a dystopian future by a small number of immensely powerful individuals and global organisations who make no secret of the future they wish to build for us.

This global coup d’état is driven by lies and corruption at every level of our national and international institutions. Nothing we have been told over the last couple of years is true.

Yet despite experiencing a lower-than-average death rate, a Covid-19 emergency was declared which saw the biggest power grab by the state over the lives of its citizens since the dictatorships of Lenin, Hitler and Mao.

The most chilling aspect of this totalitarian takeover is that Western countries acted in unified lockstep as they tore up every tried and trusted historical public health protocol related to airborne viruses and replaced them with a tyranny that had no basis in medical or scientific reality.

People who recognised what was happening publicly protested and were met with state enforced paramilitary brutality never previously seen in the West.

In Australia rubber bullets were used against peaceful protesters. In Canada, Justin Trudeau invoked the War Measures Act to beat, jail and pauperise peaceful protesters who preferred to live their lives according to the Nuremberg Code rather than Trudeau’s Mengele Code. In New Zealand huge posters of a beaming Jacinda Ardern were ruthlessly displayed on advertising hoardings across the country.

The biggest issues I can see in all this criminal insanity are two-fold. Firstly, our ruling class now know they can do whatever they want to us if they terrorise us sufficiently, as in carry out acts of genuine terrorism against their own citizens to achieve a political ambition. Secondly, we now know exactly what they want to do to us because they meet up in Davos every year and shamelessly talk about it in very loud voices.

Their power is immense, and for the first time in history they have the ability to build a revolutionary new society without having to carry out violent street revolutions. All they need is electronic data and digital IDs linked to a government-controlled central bank digital currency, which all Western governments are currently implementing.

Covid-19, mass vaccinations and digital Covid passes – please don’t think they have been consigned to history – were a necessary pre-condition of course if a Digi-Tyranny could ever become a reality.

Western governments are also working on legislation to both silence dissent on social media and stifle physical public protest. New Ministries of Truth are being formed which will disappear and memory-hole any written and spoken words our ruling class considers to be misinformation or disinformation. This is Orwell’s 1984 and it is happening before our very eyes.

Who are the people/organisations enacting this totalitarian Western coup d’état? Well, it is primarily the World Economic Forum, the United Nations, the World Health Organisation, the World Bank, the International Monetary Fund, the EU, Big Tech social media, the pharmaceutical industry, the entire Western political class and three gargantuan financial institutions called BlackRock, Vanguard and State Street, along with a handful of monumentally wealthy billionaires including Soros and Gates.

The concerted power and wealth held by the above has completely corrupted politics, science, journalism, the judiciary, academia and medicine. There are still some brave souls from those professions who risk their careers by speaking out, but you will never see them via the mainstream media or the biggest social media platforms. Those we are allowed to see are bought and paid for propagandists who tell us nothing other than the revolutionary line.

I am fifty-eight years old now. I was born a long time after World War Two and my entire life – up until 2020 at least – was one of unimaginable ease and freedom compared to most humans who have ever lived. But the freedom I enjoyed is over now. Our future could be very grim indeed. Another pandemic will soon be coming our way and I suspect this one will be necessarily much more lethal than the last.

Also coming our way are ever rising interest rates to counter the deliberately engineered inflation. If these interest rates hit double figures, every average earning mortgage holder will lose their house. The manufacture of petrol and diesel cars will soon be phased out and extortionate taxes will be introduced to keep older ones on the road. Air travel for the masses is not part of the New World Order’s Green Agenda, nor is heating our homes with oil or gas.

They have told us what they want. A smaller population. A lower carbon footprint. A digital ID surveillance/social credit state capable of bending us to their dictatorial will. No more meat, just bugs; lots and lots of delicious bugs.

The apparatchiks of the Green New World Order will still have their private jets, their beachside mansions, their haunches of venison and their champagne whilst we will own nothing, which I rather suspect will fail to induce delirious happiness whatever Herr Schwab might purportedly believe.

Can they achieve their publicly oft-stated agenda? Yes, they simply have to continue doing what they are already doing, although it will need to be substantially ramped up, hence my belief another pandemic is on the cards.

In America they have the problem of gun ownership in the hands of ordinary citizens, so I think we will see huge efforts – by means more foul than fair – to urgently rectify this problematic issue for the New World Order.

Is it all doom and gloom? Not really. They have shown their hand and despite their seemingly limitless power and wealth there are only a few thousand of them whilst there are billions of us.

I see our future as one of only two credible possibilities: freedom for us and jail for them, or slavery for us and even bigger yachts, private jets and sizzling steaks for them. It is up to us in other words. The very first thing the average person needs do is wake up. Before it is too late.

This article first appeared in TCW