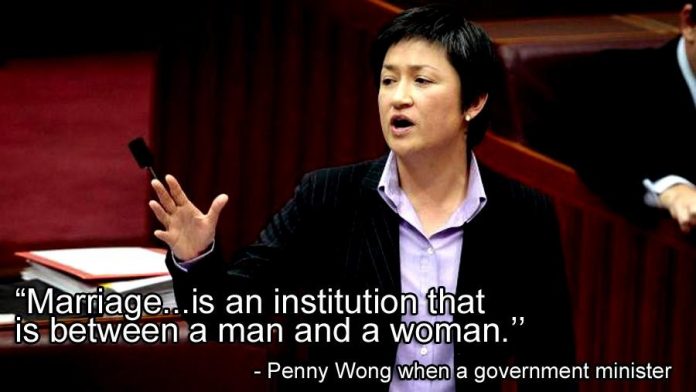 Leading the charge for same sex marriage is openly gay Labor Senator Penny Wong. Ms Wong feels we should hurry up gay marriage, criticising Tony Abbott's option for a plebiscite. Agree or disagree with PM Abbott's position, it has always been consistent – both before and after the last election.

Prior to the last election Tony Abbott said he did not want the marriage laws to change.

But he conceded the issue would be a "matter for the post-election Coalition Party Room" if the Coalition won September's Federal poll.

"I'm not trying to say that the party is committed forever and a day to the current position," he said. "I'm saying that this will be a matter for the post-election Coalition Party Room."

There's nothing surprising or inconsistent in Abbott's recent decision to take the issue to a joint party room and announce the Party's position for the next election.

In contrast, when Penny Wong was a Labor Minister she said, "On the issue of marriage I think the reality is there is a cultural, religious, historical view around that which we have to respect. The Party’s position is very clear that this is an institution that is between a man and a woman.”

She agreed with her leader Julia Gillard, and opposed same sex marriage! The former Labor PM said, "…marriage is a special status between a man and a woman".

During six years in government Labor did nothing to promote gay marriage, in fact it opposed it.

Today, Labor is demanding Tony Abbott allow his Party a free vote to enable the Marriage Act to be changed, now! Without a fair and reasonable input by the people.

Does anybody else sniff a whole dose of political opportunism and not so much political principle?