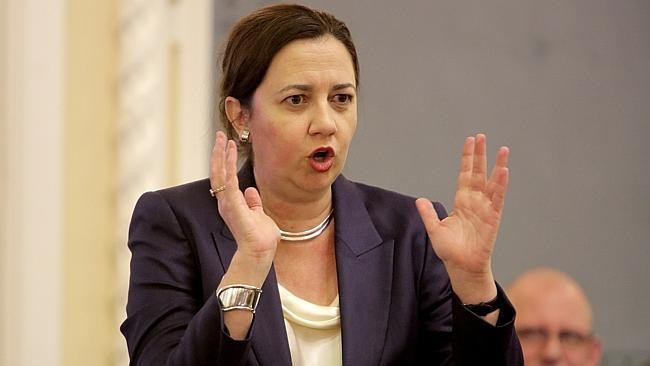 When you claw to power telling porkie pies, with no plan, you're always going to come unstuck. The fall from grace with voters is in its early stages as it dawns on Queenslanders that they were conned.

Anna P delivered a pre-election iron clad promise she wouldn't sell any State assets if Queenslanders entrusted her with the stewardship of the State. The previous Newman LNP government was never going to sell State assets either, they promised "leases" but that didn't stop Anna repeating the deliberately contrived fib that, "A vote for the LNP was a vote for State asset sales".

The unedited slogan she repeated ad nauseum right up until election day;

"Labor will not sell your assets".

But it's no surprise that someone who doesn't know the GST rate can't tell the difference between "lease" and "sale". The same con job is on in NSW with the unions running repetitive ads that the NSW Baird government, if re-elected, will "sell" assets. Baird says "lease" too. Oh well, blatant porkies worked in Queensland so why not try it on everywhere else? No doubt if it works in NSW, too, Shorten could run wif it.

Realising belatedly that there ain't no magic pudding in State treasury, Premier Palaszczuk is now embarking on, goodness me, a SALE of assets. Surprised, anyone?

Squirming today, she told reporters she didn't mean ALL assets and that these sales are "just normal business transactions" (cough, cough).

"Non-core" promises would have been a more credible wriggle.

In the meantime, Queensland's Independent Remuneration Tribunal has just given all Qld pollies a 2.58% pay rise.

Anna P's deputy, Jackie Trad, tried to link today's pay rise to Campbell Newman in a hopelessly contrived and dishonest way, saying today, "We want to make sure that the gross and overbloated politicians' wage increases of the past, the 30 per cent you saw under Campbell Newman, will not happen again," she said.

That's almost as uninformed as confusing "lease" with "sale" and not knowing the GST rate.

Fact 1. Newman had no say over pollies' pay rises. He set up the Independent Remuneration Tribunal to make those recommendations.

In line with her Premier, deputy Jackie seems to struggle with numbers – and facts – and with who makes these decisions.

Good luck with these two running the shop, fellow cane toads and banana benders, you're going to need all the luck in the world.

On the bright side the pork pie industry looks like booming in Qld for the next few years.