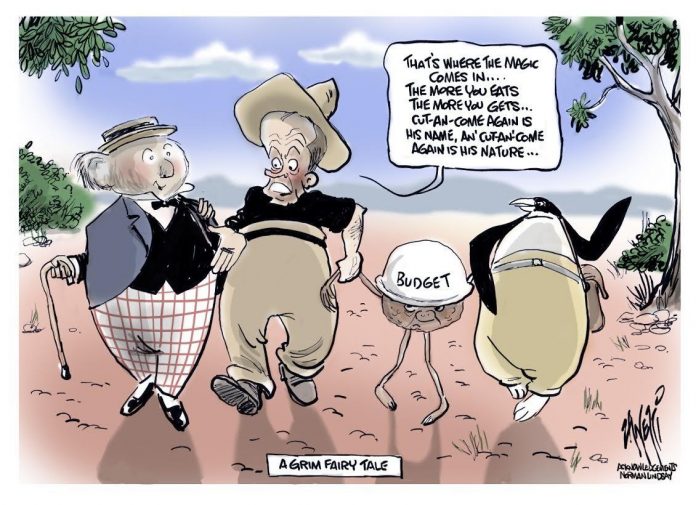 Being a politician, especially an aspiring PM, requires both a sense of humour and a reasonably tough skin. You have to take the good with the bad, roll with the punches and accept criticism and satire all as part of the democratic process in forming and moulding public policy.

Bill Shorten's approach however is to block news or opinion that isn't advantageous to him. The alternative PM (or his staff) either doesn't like the way I draw him or he's sensitive to critical comment.

Precious Bill has blocked me from reading his twitter feed. Not that I feel any loss because I usually dozed off before finishing his tweets, and that's saying something because tweets are limited to only 140 characters, but it says a lot about Bill.

Maybe it was the Magic Pudding cartoon drawn after his woeful appearance on the ABC 7.30 Report where he tried very hard to sell the idea of spending to get back to Budget surplus. Didn't work for Swan. The definition of insanity is doing the same thing over and over and expecting a different result.

Note to media from the Opposition leader's office: All cartoons and comments must be positive about our dear Opposition Leader.

On another point, over recent weeks we've watched as the oil price has plummeted by around 50% from $US115 barrel to its current levels of around $US60 barrel, estimated to get down to around $US50 barrel in the new year.

This is due to the Saudis panicking at the emergence of new oil suppliers from US and other global fracking developments. OPEC, under threat by emerging competition, is ramping up (over) supply beyond demand to force down the price of oil.

New developments require a break even price of somewhere between $US80 – $US100.

The current price makes new oil projects unviable, knocking them out and keeping the OPEC cartel a monopoly. In most other commercial markets this is called predatory pricing and is illegal.

But what that means here in Oz is that our pump price is dropping like a rock and has been for some time.

Mid year I was paying around $1.60 litre at my local servo.

Already this morning petrol price watchers are reporting that some areas around the country are already at $1.20 litre.

Meanwhile just a couple of days ago, silly Billy Shorten was still banging on about a 1/2c litre fuel levy introduced in the Budget.

The revenue of that levy will be pumped into roads, infrastructure and therefore jobs, with the federal government contributing $40 billion and the States matching with another $40 billion, a total of $80 billion of more and better roads and thousands of Jobs.

JOURNALIST: Can you name another policy the Government should retreat on?

Petrol prices have dropped by more than .40c litre in Oz since the May Budget and you're still beating yourself up over the 1/2 c fuel levy that's going towards more jobs and better infrastructure?

Mate, it'd be less easy to have a giggle at your expense if you weren't so transparently silly, Billy.

And you wouldn't have to block people reading your tweets.