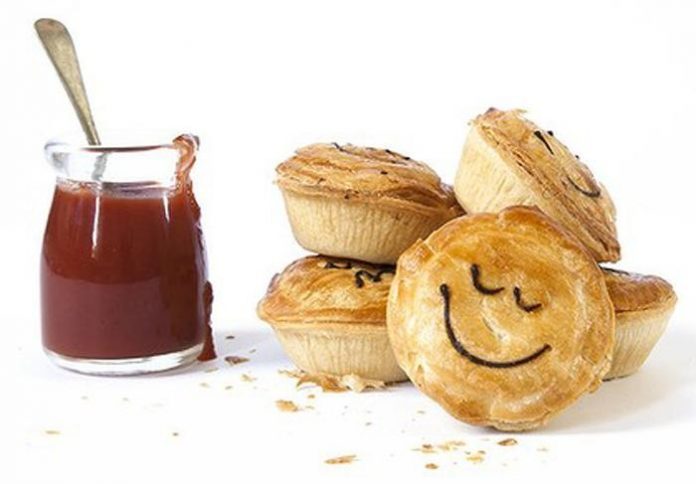 I love a chunky meat pie. What's more indulgently, wickedly, deliciously Australian than a steaming hot pie smothered in sauce, and a squirt of the sweet red goo right through the heart of the handy little meal in an eatable pastry dish?

But today I can only eat a couple a year. I carry the guilt for 6 months and the extra kilos for who knows? A minute on the lips, a lifetime on the hips. Or a week of rabbit food and water to try to negate a few minutes of pie-dulgence.

Just thinking about all that gravy, gunk, salt and heart-stopping flour based flaky crust adds another few kilos to my waist.

Perhaps one of the reasons Pie Face, the Aussie based fast food chain, collapsed is in the age of health minded food consumers a meat pie is an occasional indulgence, not a daily graze, or even a weekly treat. The cash flow wasn't keeping up with costs. Lunch timers walk right past the pie shop straight to the sushi place.

At our local Sushi Train customers happily wait 1/2 hour for a seat or 15 minutes for take-away. The Pie Face just a few metres away is usually empty. It's only been open 9 months.

Like Maccas, there are also choices of wraps and sangas at Pie Face, which isn't their core business. The overwhelming choice is pies, sausage rolls, pastries and cakes. Bugger, there's another two kilos stacked on.

Traditionally the favourite food of tradies and footy fans, another problem for a food chain selling pies is that most tradies stock up on a sausage roll, pie and chocky milk while filling up at the servo. There's a petrol station on the same block as our Pie Face. Smart thinking would be to roll out little Pie Face counters at all the servos to catch their core customer.

Pie Face has 28 company-owned stores and 44 franchises in Australia. Last Thursday they appointed voluntary administrators while trying to restructure and raise more money.

Local and overseas expansion has been aggressive and in some cases continues. Manhattan in New York City was to get 16 stores. Seven ended up opening, while six were closed last month.

Pie Face still plans to open in Abu Dhabi and Dubai this week and a couple more stores in the Middle East are due before Christmas.

It seemed like a good idea at the time when Pie Face opened its first store in 2003 in Sydney by Wayne Homschek, a former Citigroup banker, with plans to roll out a chain of the iconic Aussie fast food.

Analysts believe the aggressive rollouts weighed down by debt and insufficient cash flow contributed to the chain's collapse.

Or to coin a fast food term, they bit off more than they could chew.

YOU HAVE TO LET US IN TO YOUR COUNTRY…