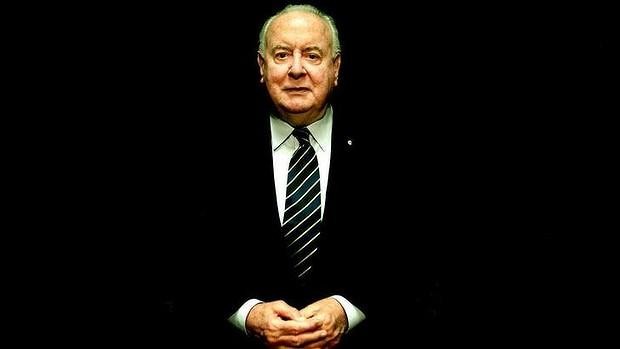 Whatever your view on Gough, and mine is he would've made a better stand up comic with his own TV show than PM, his wit in Australian politics was sharp, possibly unrivaled, challenged only by the likes of Fred Daly, Jim Killen and the affable John Button.

There is none like him today in the quotable quotes domain. Certainly not Abbott, nor Shorten, Rudd nor Gillard. Keating was simply acidic without the wit. Hawke, yes, he had a quick wit.

I remember when Bob launched one of my books and he came down with a nasty cough the day before the launch. Barry Cassidy who was Hawke's media manager called to say if Bob deteriorated overnight he'd have to cancel. Bummer!

The next day, his office confirmed that although Bob was still crook, he wouldn't let me down. I popped out to the chemist down the road and bought a big bottle of cough medicine and tied a big blue bow around it as a sort of 'thanks'.

After he made a very funny off the cuff speech, cameras rolling and clicking, I pulled out the bottle of sweet chalky syrup and handed it to him. Hawkey eyed it up and down, then quickly unscrewed the top and took a swill.

The cameras went into overdrive. Suddenly aware of the headlines, Hawke turned to the media throng warning 'em, "Now I don't want any stories from you bastards that Hawke's back on the bottle!"

I can't think of any media-managed pollie today so spontaneously quick-witted.

I was just a kid when Gough was PM, but I noticed him. In fact if not for Gough I may not have developed a thirst for politics so early in life. He was an imposing figure in our lives, on the front pages and all over our black and white tellies.

He did have a great vision for what he wanted Australia to be, but it wasn't the vision for all. I remember my late dad (an immigrant who left school at 14) trying to run an engineering business, employing mostly fellow European migrants and struggling to make ends meet in a volatile economy with uncertainty under Gough's leadership.

Whitlam's cabinet largely contributed to his downfall, balls and chains around his government infamous for scandal after scandal from the Cairns-Morosi Affair (literally) to the dodgy Khemlani Loans Affair.

It's natural and easy to look back after decades and paint a rosier picture of the times and legend of a giant when he dies.

Today was a day for all of us to honour and reflect, for politicians and leaders of all walks of life to join together to pay respect.

Instead what we, the people, witnessed was a national embarrassment.

Booing anybody paying homage at a memorial about is as low as it gets. It's disrespectful, not only to the misplaced target of hate and scorn, but to the family of the figure being honoured.

The Whitlams are a very dignified family. That's not what they would have wanted. And it's not how Gough would have reacted to a rival politician. He became a fellow traveller and friend with the man largely responsible for his political demise, Malclom Fraser.

He forgave. No bitterness.

That was the mark of the man.

It's a shame so many sullied his day. For most of the day radio reports, social media and online feeds talked of only one thing – booing at the Whitlam memorial.

It was Gough's day but shamefully will now be largely remembered for bad behaviour.

Gough walked tall, but so many today slunk so very low.

WHAT IS THE “COUNCIL FOR INCLUSIVE CAPITALISM?” IT’S THE NEW WORLD...