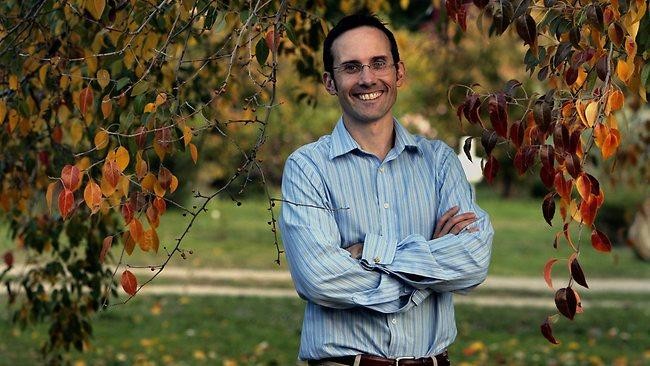 Labor frontbencher Andrew Leigh has always struck me as one of those party nerds who try way too hard to please and to impress. The school wonk you always wanted to give an uppercut after he sat down from reciting word-for-word the first six volumes of the Encyclopedia Britannica. The class dobber and teacher's pet desperate for approval, collecting all the little merit badges in his over reach for school prefect.

Basically, Labor's Christopher Pyne without the wit and cheek.

In case the name doesn't ring a bell, the face probably will. It's the one that was always nodding so furiously in sycophantic beat to the then PM Julia Gillard's monotone announcements – he was the one behind her shoulder inching ever closer into camera shot at any opportunity, especially when she was announcing another multi-billion dollar wasteful thought bubble.

Leigh's also been a professor of economics at the ANU which only underscores his dissociation with the real world. All theory, no practice. Academia is a world away from reality.

Economists are so engrossed in their theoretical formulae and computer modelling data that they completely missed seeing the Global Financial Crisis until it whacked them on the noggin.

A lot like global warming scientists whose computer models tell a different story to Mother Nature, who refuses to be told what to do.

Yesterday Andrew Leigh came out demanding that Julie Bishop apologise to Ms Gillard for suggesting that the former prime minister had benefited from siphoned-off funds from her boyfriend's slush fund, which she had set up.

What was it I said about economics boffins who don't live in the real world?

Firstly, there's been no finding or judgment either in favour of, or against, Ms Gillard.

There's been a submission to the Commissioner by the counsel assisting the Royal Commission into Union Corruption and Governance.

In that submission the counsel has stated the following:

'…for the reasons set out above the Commission should find that Ms Gillard was the beneficiary or recipient of certain funds from Mr Wilson, consistent with the evidence of Mr James and Mr Hem…But she was aware of facts, had she turned her mind to them, which would have indicated that the source of the wads of bank notes cannot have been the low union salary of Mr Wilson of about $50,000 – a man who was supporting his family in Perth, his own household in Melbourne, and his relationship with Ms Gillard in Melbourne, and who was not shown to have had any income from property exceeding the cost of mortgage repayments – but must have been some fund he did not own but did control. That is, she must have been aware of facts, which had she turned her mind to them, would have revealed that Mr Wilson was making payments to her in breach of some fiduciary duty.' (end)

So why the need for an apology? Bishop was on the money.

Sorry, Master Leigh, but we're going to have to confiscate a couple of those merit badges for that one.

Secondly, what Master Leigh and so many casual observers don't understand is this is not a court of law. Just a submission by counsel to an RC.

This RC has limited powers, which don't reach into other matters where the police or courts do. There's still a Vicpol investigation afoot.

There's still evidence to be read and corroborated by the Fraud Squad. The Wilson Slater & Gordon files for example. There's also a matter of the transcript from the WA Administrative Appeals Tribunal where Ms Gillard represented Wilson in her application to have the decision of the WA Corporate Affairs Commissioner appealed and overturned, when Blewitt (on behalf of Wilson) failed in his application to register the dodgy slush fund as an association.

We know that transcript is there because the WA Incorporated Associations Act states an appearance at the WA Admin Appeals Tribunal is the only way to overturn the commissioner's decision, and Wilson confirmed they appeared together in WA when giving evidence at the RC.

He described the room where Gillard appealed as "a type of court room".

There's so much more still to come which is beyond the scope of the RC. And a possible court case.

Let's not jump the gun, Master Leigh, or jump to conclusions.

That's precisely the sort of excitement that got you sacked when in government with Kevin/Jules/Kevin trying to run the joint, that is when they weren't ripping out each others' eyes.

A lot less excitement and a little more attention to detail wouldn't hurt.

Worth a shot, at the very least.