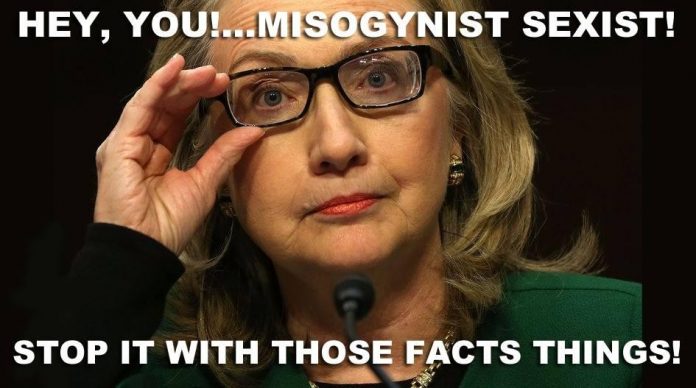 So Hillary Clinton is pulling on the tired old sexism, misogyny trick which didn't do much good for Julia. In her book Hard Choices, Hillary says Julia Gillard faced outrageous sexism. The book is being used by Hillary as a lever for her tilt at the US Presidency.

The problem for Hillary is she's just shown herself unfit to be President on a couple of scores.

"Even leaders like former prime minister Julia Gillard of Australia have faced outrageous sexism which shouldn’t be tolerated in any country," Mrs Clinton wrote.

Mrs Clinton told Ms Gillard to defend herself against allegations from decades past which were being used drag her name through the mud.

When the pair met, Ms Gillard was facing questions over her role in the Australian Workers Union affair dating back to her time as a lawyer with Slater and Gordon in the 1990s.

Mrs Clinton told Ms Gillard: ‘‘You've got to stand up to it and be clear about it and name it for what it is because the temptation is to say, 'Look this is so absurd, it'll die a death’, whereas these things unfortunately don't die a death.’’

Unfortunately for Hillary the events of nearly 20 years are not about 'outrageous sexism'. They're about corrupt (and possibly criminal) conduct.

That corrupt conduct is now under investigation by a Royal Commission, where Julia Gillard secretly established, possibly illegally, an incorporated association for her then union official boyfriend which was used to defraud monies by false invoices for work that was never performed.

Julia Gillard, never opened an office file as required, but in fact kept a secret file (since gone missing). When caught out, she told her law firm partners the association was a 'slush fund'. It had just two members, her boyfriend Bruce Wilson and his underling bagman, Ralph Blewitt. An incorporated association is required by law to have at least five members.

It's illegal to set up an association to be used as a 'slush fund', and a lawyer knows that, and doing so is a breach of two legislated acts.

The WA legislation (where the association was incorporated) explicitly prohibits an association's incorporation if it aims to financially benefit the members and sets out penalties for lodging false or misleading information.

Mr O'Connor has based his opinion on Ms Gillard's 1995 explanation to Slater & Gordon, where she then worked, in which she said she had provided advice "that it was better to have an incorporated association, a legal entity" to manage a re-election or "slush" fund for members.

Further, Gillard told the WA Corp. Affairs Commission the proposed association had nothing to do with the union (AWU), even though she applied on behalf of the AWU officials Wilson and Blewitt and the AWU was Slater & Gordon's client, and she applied the second time on S&G letter head, as a partner. Bad enough misleading the Commission (a criminal offence), but worse as a partner of a law firm, clearly aware of the consequences and penalties.

One of the witnesses testifying at the Royal Commission this week, Athol James, was a woodworker who worked on Julia Gillard's Abbotsford house renos. James claims he saw Wilson give cash to Gillard who then paid workers for renos to her house.

Gillard told her law firm partners she 'could not categorically rule out' that monies from the 'slush fund' didn't pay for her house renos. Yet, in 2012 at her infamous hour-long press conference, when asked who paid for her house renos, Gillard said she paid for them (according to woodworker Athol James, she did pay the workers – with the cash Wilson gave her).

Wilson's bagman, Ralph Blewitt, has already testified at the Royal Commission that he paid $7,000 in cash at Wilson's instructions to builders at Julia's House.

Blewitt claims Gillard was at the front of the house at the time and ushered Blewitt out the back to see Wilson when he arrived with the money to pay the builders.

The noose is tightening each day as more testimonial and documented evidence is tabled at the Royal Commission.

Hillary has done herself a great disservice brushing off as 'outrageous sexism' the real concerns of criminal behaviour of a leader of another country – simply on the basis that leader is a woman.

If it were a man, not doubt it wouldn't be 'sexism'.

And there's the hypocrisy.

Women who seek the ulitmate status of power demand equality, but when they achieve that equality, turn to demand 'special treatment' on the basis of being a female. It's demeaning to them, and demeaning to other women.

That Hillary has grasped at this 'sexism' straw shows she intends to play it for all its worth should she attain the US Presidency – defending her own ineptness and poor judgement with shrill cries of 'misogynist sexists!'

Hell, it worked for Julia…didn't it?